A Dark and Stormy Night…

Review of Relic by Douglas Preston and Lincoln Child

A series of murders haunts the New York Museum of Natural History’s “Superstition” exhibition before it even opens. A primeval Amazonian terror stalks the labyrinthine corridors of the ancient edifice, and it’s up to an unlikely cast of characters to find the beast and stop it before it kills again. And this is an unlikely cast, which lends a good deal of charm to what would otherwise be little more than a perfectly serviceable monster story. Said characters include: the wheelchair-bound Dr. Frock and his graduate assistant Margo Green; NYPD’s finest Vincent D’Agosta; journalist William Smithback; and, above all, FBI Special Agent and master-of-everything-he’s-ever-tried-his-hand-at Aloysius Xingu Leng Pendergast (no, really). Frankly, Pendergast alone makes this book a delight to read (despite being inexplicably excluded from the 1997 film version).

As throwaway airport reads go, this is a decent one. Preston and Child tell a story that is a fast-paced page-turner. Even better, Relic includes several themes that will be of interest to Christians. Not least among these are the danger of willful ignorance, the role of science in society, the idea that salvation comes through self-sacrifice and hardship, and the relationship between evil and nature. (All that aside from the persistent question of whether or not Christians can profitably engage the horror genre—I hope to do a stand-alone post on that issue in the future.) And while all of these would be fine topics for a review, can we talk for a minute about setting? 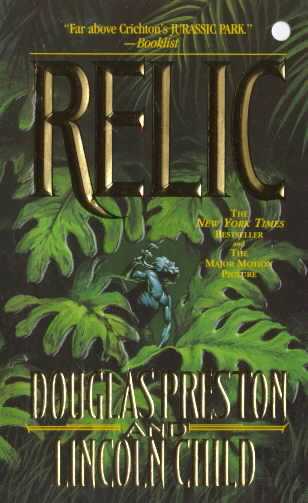 Setting in many ways is the most important of the secondary characteristics in any book. It is the background that we only notice when it is done exceptionally well or exceptionally poorly. A good setting can almost become a main character in the book, with a life of its own that holds our interest nearly as much as the primary action and works to emphasize the important themes of the story (consider the contrast between The Shire and Mordor in Lord of the Rings). In the cocktail party of a decent novel, a bad setting is the drunken boor who crashes the party, takes a bite out of every hors d’oeuvre, and falls asleep in a puddle of his own drool. And while that might be fun to watch for a minute, it quickly gets irritating if it goes on too long and can even ruin the whole evening. Setting can break a story if done badly, and enhance it if done well.

As evidence of this, consider for a moment the various settings we find in the Bible. If we think of it as a single literary unit viewed from many perspectives, we see the following settings emerge:  It begins in a Garden and ends in a Garden, and culminates in the coming of the Gardener to set the corrupted land to rights (Luke 20:9-19). It also begins in a city and ends in a city, and culminates in the architect bulldozing the wicked city and building a new city for his people that will last forever. But the setting of the Bible is also the human heart. The book begins with the corruption of the heart and ends with the final regeneration of the hearts of God’s people by Christ. Whichever setting we use affects the feel and mood of the narrative. (I certainly don’t claim to be elevating one of these over the others; you might check out the Literary Study Bible and Leland Ryken’s How to Read the Bible as Literature if you want to think more about the topic.)

Clearly, setting is going to be a key factor in any story, but this is especially true in the horror genre. A good scary story requires an appropriate setting. While a bright sunny day at the beach might work as the beginning of a horror story, at some point night has to fall or thunderclouds have to roll in or the hero has to fall into the murky depths of the ocean, otherwise the attempt to scare us will fall flat. Horror simply cannot be effective amidst placidity. And if you are an American author who wants to write horror you very quickly run into the problem that America, by and large, just isn’t a scary place.

Let me explain. Other cultures—take the European ones, for example—have the advantage of living surrounded by the past. A Roman ruin, a Gothic Cathedral, a castle built a thousand years ago—these all make fantastic horror settings. Of course the Roman ruin is haunted; it has always been that way. Does a dead nobleman walk the halls of the ancient castle waiting for trespassers to waylay? Heck, our great-grandparents knew to avoid that place. And what generation in the past millennium hasn’t heard the cathedral bells ringing when we knew darn sure there was no one in the tower? Europe is a haunted landscape that practically demands the existence of a Bram Stoker or a Jacob Grimm.

On our side of the Atlantic, we can see how this is a bit more of a challenge. “Is that house haunted? I don’t know, but the guy who built it lives down the street—let’s ask him.” “Hey, is that a vampire? Nope, just the mayor on a bender.” And so on. We simply don’t have the antiquity to pull off what comes so naturally to our elder cousins. In many ways, this problem of setting is actually a benefit because it forces authors to be exceptionally creative in how they craft their narratives. They can’t just take the setting for granted and move on to plot, character, and theme; they have to artificially construct something that will be frightening, believable, and unconnected to historical reality all at the same time. All of this to say that in Relic, Preston and Child have done a wonderful job of doing just that.

The authors have imagined a setting that is appropriate, creative, and not so utterly ‘out there’ that it destroys the effect of the book. Specifically, they have summoned from the ether the New York Museum of Natural History. To the best of my knowledge (i.e., Wikipedia), there is no such place—though they’re clearly using the American Museum of Natural History as inspiration. Preston and Child have created a setting that is old, mysterious, and full of everything you need for a good horror story. There are unexplored basements, ancient connections with abandoned storm drains and subway lines, crates of artifacts that haven’t been opened in decades, and entire rooms that have been decorated with the treasures of the past only to be locked and forgotten. What older cultures have organically all around them, Preston and Child have created artificially to great effect. Where our history does not grow out of the earth as it does in Europe, in Relic it at least surrounds us by means of the New York Museum of Natural History. This, in turn, gives an air of depth to the building tension as the horror stalks the characters. It’s not just a monster in a building; the setting turns the struggle with the creature from a war for mere survival into a war for the future of the culture. What would have been a man vs. nature struggle becomes a conflict between society and evil. And that, in my (usually much-less-than) humble opinion, elevates a merely serviceable tale to a story worth reading.

As I pointed out at the beginning, this is only one of the themes of interest in the book. But you’ll have to read it yourself to get to the others. Which you should do, because it is excellent.

Warning: This book does contain a bit of gore, so beware if you’re squeamish!

Coyle Neal is a Ph.D. in Political Philosophy and is currently drafting his plans for bringing about casual Mondays-Thursdays.

November 9, 2012
Skyfall; or Why Some Old Dogs Don’t Need to Learn New Tricks
Next Post