Naturally, any film depicting race relations in the United States can and will evoke much conversation; hence this review is no different. I will set aside a full explanation of the plot and only dabble in specifics when necessary. My hope is that you will either read this and have your curiosity piqued, or watch the film first then read this review and tell me what you saw that I might be missing.

Django (Jamie Foxx) is a slave who bounty hunter Dr. King Schultz (Christoph Waltz) purchases with the intention of using to identify the Brittle brothers—a trio the government wants dead or alive. Schultz is a German who dislikes slavery and promises to free Django and give him some cash after their assignment is complete so that he can go find his separated wife, Broomhilda von Shaft (Kerry Washington), who happens to speak German. The hunt for the Brittle brothers is just a prelude, after which Django joins Schultz as a deputy until the Spring arrives and they can go search for Broomhilda. They find Broomhilda at Calvin Candie’s (Leonardo DiCaprio) plantation—“Candieland”—and must find a way to free her. 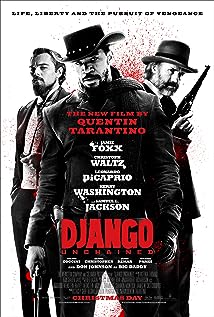 The role of Christianity in the antebellum South is worth mentioning at the outset. This topic isn’t pervasive, but it is explicit in one scene where Django is begging one of the Brittle brothers not to whip Broomhilda. The Brittle brother who does the whipping recites ominous passages from Scripture as he prepares to ply his nefarious trade, and in a subsequent scene is seen with pages of the Bible tacked to his clothes. Yet the film also suggests some religiosity on Broomhilda’s part—a rosary is seen dangling from her wrist as the whipping begins.

Tarantino’s nod to the religious complexities of the antebellum South is appreciated. Both slaveholders and abolitionists based their arguments for and against slavery on Scriptural injunctions (we also see the resonance of slavery in the influence of spirituals upon hymnody). Without wading too far into this historical debate, we can confidently assert that slavery practiced in biblical times was nothing like the peculiar institution established on Southern plantations. Slavery discussed in the Old and New Testaments refers to an institution similar to indentured servitude, whereas Southern slavery was race-based.

This race-based worldview flows in many ways from a Darwinian baseline. Blacks and whites were seen as in essence different species. Candie, the slaveholder who owns Broomhilda, explicitly discusses this intellectual framework when he holds forth on the submissive nature of slaves. He asks a question, “Why don’t they kills us?” With slaves outnumbering the slaveholders, why wasn’t slave-on-master violence more common? Candie attributes this to simple “science”—blacks are “programmed” via the development of their brains to be submissive. This lecture is possibly the watershed moment in the film that puts words to what’s been going on throughout the entire story. What follows is the slow dismantling of this idea of a subordinate species.

Candie is a Francophile—aspiring to a form of European elitism—yet he can’t speak a word of French, while Broomhilda is fluent in German. Candie named one of his slaves D’Artagnian after the Alexander Dumas novel (naturally one of his favorites). Yet when Dr. Schultz implies that Dumas wouldn’t approve of slavery, Candie presses him on the point and Schultz matter-of-factly states that Dumas was black, much to Candie’s shock. And the most Tarantino-saturated climax of the film—the concluding bloodbath—turns Candie’s theory of the biological submissiveness of blacks on its head when Django goes on a shooting spree.

The role of biology in the category of “race” seems integral in many respects. Race is a social construct that may perhaps be best rejected for the better category of “ethnicity.” The idea of a group of people having similar characteristics beyond the color of their skin, merely because they have the same skin color, seems to open the door for dangerous logical deductions of racial superiority. For a Christian perspective on race, I would recommend Thabiti Anyabwile’s Many Ethnicities, One Race, as well as works by Anthony Bradley.

Tarantino adds another dynamic: the historic debate among African-Americans whether to rebel or patiently reform—to use violence or non-violence. That is, whether to follow W.E.B. Du Bois or Booker T. Washington, Malcolm X or Martin Luther King, Jr. In Django Unchained, Django’s chief nemesis is arguably not Candie, but his slave Stephen. Stephen is the head butler in charge of household affairs. Though Stephen is a more complex character—he seems to have given up any desire for equality and identifies himself completely with the white man’s racial worldview—he does represent the internal struggle within the African-American community regarding how to respond to racism.

Tarantino prods his viewers to cheer for Django’s vengeance upon the white man and his cohort, but a Christian response should be different. Martin Luther King took the moral high ground of nonviolence to show in stark contrast the difference between George Wallace’s violence and the Christian love of the African-American community. Django joined the white folk on the moral low ground in order to satiate his sense of revenge.

What does Calvary say? There, an innocent man on a cross could have called legions of angels to avenge this heinous deed, yet instead suffered unto death for his murderers.