Tom Cruise’s latest movie is both unfortunately and fortunately timed. It is unfortunately timed because of how it opens—with a sniper randomly shooting people in Pittsburgh. Suspect James Barr is quickly caught, and before being put in a coma by a brutal prison beating, he tells the authorities to “get Jack Reacher.” Jack Reacher  (Tom Cruise) promptly shows up, punches everyone in Pittsburgh, delivers a slew of one-liners, and solves the mystery. What more could you ask for in a movie?

And just for the record, I do recommend this film. As with most of the more recent Tom Cruise movies (such as War of the Worlds, The Last Samurai, Valkyrie, or Minority Report), this is an enjoyable action movie with a fast-paced plot, decent banter, good action sequences, and appropriate plot twists. You also get to see Robert Duvall do what he does best—show the young why you should never mess with your elders. 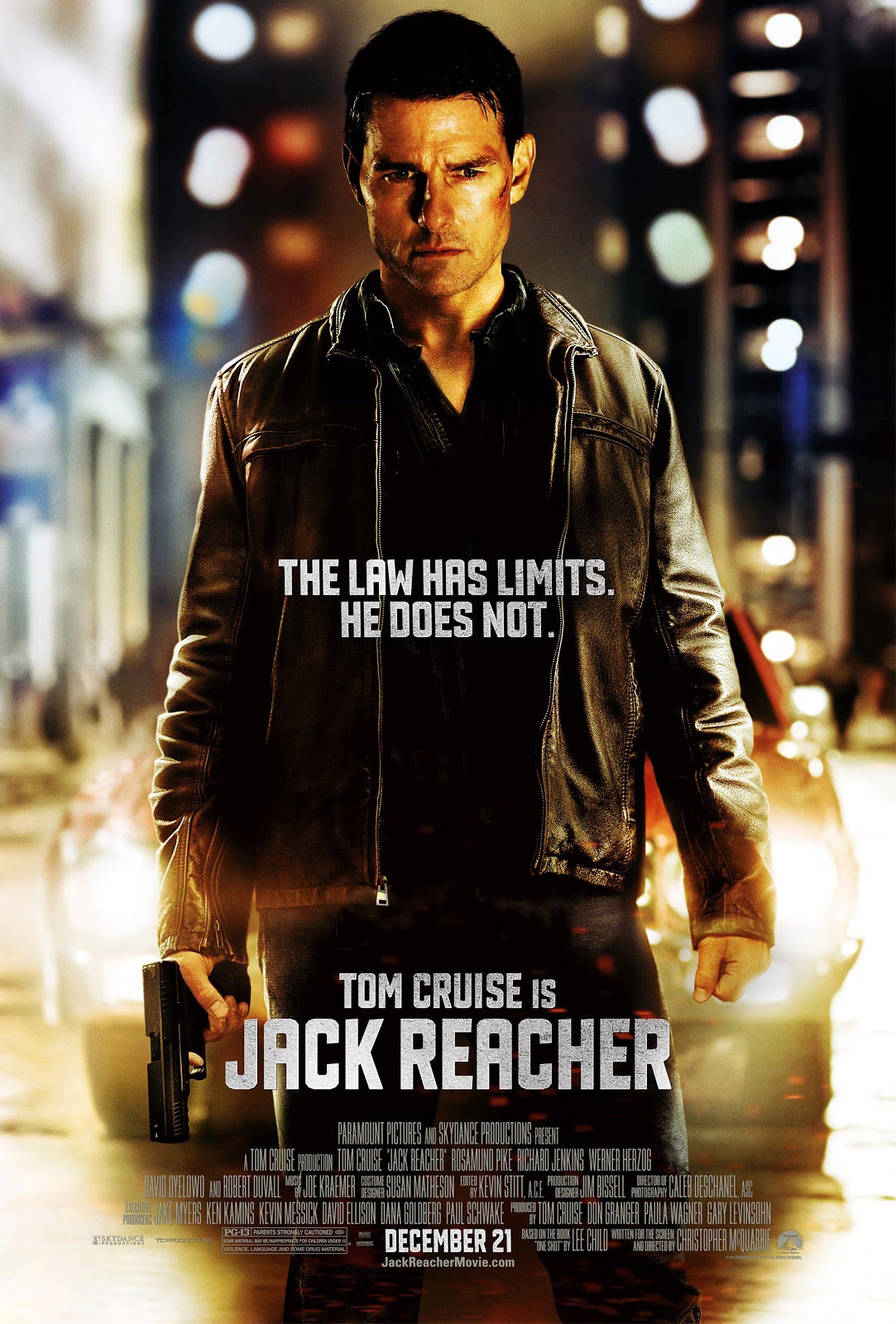 That said, obviously the nation is touchy about random shootings right now—even fictional ones. That feeling definitely carried over to the theater audience for the first few minutes of the film as we watched a sniper set up and fire at a Pittsburgh sidewalk (I’m not familiar enough with the city to know if that particular sidewalk is a landmark or not). As I said, this release wasn’t terribly well-timed—not that anyone could have known in advance.

Yet, I believe there’s a fortunate element to the timing of Jack Reacher’s release as well. Yes, it opens with a shooting. But it also involves justice being meted out to the shooter and all of his associates. This movie will, I think, end up being more popular as a result of its timing. Without last week’s events, it would have been a solid enough action movie based on a reasonably adequate series of books.  With last week’s events, it now provides an element of social catharsis by giving us what we all on some level really wanted to see. (Vague spoilers ahead) If we must hear of tragedy on the news, we also want to hear the follow up that “and one citizen jumped on the gunman, took his weapon, and beat him into submission with it.” Suicide on the part of the criminal simply compounds the tragedy by removing any hope of human justice from the picture. We feel cheated that not only was murder committed, but the chance to punish the criminal—and let him know that he is being punished for his crime—has been taken from us.

Jack Reacher gives us some of that back, if only in watered down form. Like one of Tarantino’s gritty revenge fantasies, we get to see a form of justice acted out in a way that never quite matches the real world, but which still speaks to the part of us that demands the punishment of the guilty in the name of the slain innocent.

As Christians, I think we should probably have mixed feelings about this kind of a portrayal of justice. On the one hand, we can see in it a shadowy picture of the justice that will be poured out on the whole world. God has promised that no one will ultimately “get away with it.” God will judge the living and the dead, and atrocities that seem to have no meaning or reason in this life will one day be held up before the light of divine justice and receive their right punishment. When Tom Cruise whales on a bad guy we see a small image of what will someday be a judicial reality before the throne of God.

On the other hand, we should also remember that we’re none of us innocent. (Romans 3:23) While we may not have committed every crime it is possible for a human being to commit, we have still dedicated ourselves to a life of rebellion against a holy and just God. At the end of the day, we deserve to have Tom Cruise drink our blood out of a boot (you’ll get that when you see the movie). Even more, we deserve to drink the full cup of God’s wrath down to the dregs—to bear the awful weight of punishment that our sins deserve.

The good news is that God himself has provided an out. Where we have done nothing but rebel and thus deserve death, Jesus Christ became a man, lived the perfect life that you and I should have lived, and died on a cross, taking on himself the sin that we committed and the punishment that it earned and finishing God’s anger against us. (Romans 5:8) This is the picture missing from the movie, and the reason we should be a bit mixed in our response to it. God does not deal solely in justice; he also gives mercy when he turns his justice aside by satisfying it on the cross. The picture of justice in the movie is fine as far as it goes, but it is only a partial one.

December 21, 2012 Cirque du Soleil: A James Cameron Filmmaking Dictionary
Recent Comments
0 | Leave a Comment
"hmm interesting and informative information, and would like to add interesting information from myself. I ..."
Steve Andrews Violence and Sports in Netflix’s “Malice ..."
"Fair enough--though I do have to wonder at what point someone who believes in ongoing ..."
cneal Common Grace, 2.50
""... we're not deists and don't believe God has created and then left." Not all ..."
Deist1737 Common Grace, 2.50
"I am aware of those kinds of discussions and statements (and even of the fact ..."
cneal Confronting the American Gospel
Browse Our Archives
get the latest updates from
Schaeffer's Ghost
and the Patheos
Entertainment
Channel
POPULAR AT PATHEOS Entertainment
1