This book probably needs no summarization. If you are any kind of literate Christian, you’ve probably been at least indirectly exposed to C.S. Lewis’ masterpiece The Screwtape Letters. Andrew Farley has updated Lewis’ work to meet the needs of the 21st century by providing this “translation” of a demon’s how-to manual. Broken into three broad categories (“Steal,” “Kill,” “Destroy”), the instructions walk through the ways in which a tempter might lead a Christian astray. 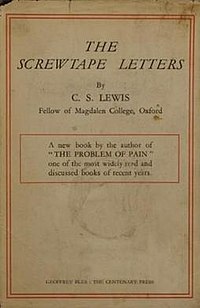 Like the original, this was no doubt a very difficult book to write. After all, you have to first identify what doctrines you want to express, then express them only in the negative in such a way that it at the same time both appears to be a serious attempt at deception and is clearly something which the author himself does not actually believe at all. In this writing experiment Farley has done an excellent job of meeting these difficulties head on. (Not, of course, as well as C.S. Lewis, but then who could ever claim that?)

In a sense, this is also a difficult book to review. Given the style of narrative and characters involved, anything less than total and complete agreement would seem to be taking the side of the demons. Fortunately, I think most of this book is a pretty solid (theologically) approach to the Gospel. Farley has clearly presented the complete and utter forgiveness that comes through the cross and that is available to every believer. Moreover, he repeatedly reminds us that this forgiveness was accomplished and finished once and for all on the cross, and requires no extra effort on our part to make it work. The doctrine of Christ alone bleeds through the pages of this book.

My two minor hesitations are on his doctrine of sanctification and (related, but not exactly the same) his perspective on the Law.

At one point, he has the demon make the following comment:

We know children of the Enemy are as holy and set apart for him as they will ever be. While their attitudes and actions are being renewed, they cannot possibly set themselves apart any further. Through the Work, they were made perfectly holy, once and for all. They have already become people of his possession, reserved for him. No action of their own could ever make this more true, and any attempt to do so is a waste of time and effort. So what should our goal be other than to have them waste time and effort as they seek to make themselves more holy? (104-105)

Obviously, this is problematic. On the one hand, it is absolutely true if we’re speaking of justification and the certainty of God’s decreed righteousness in Christ for His people. Because of the life, death, and resurrection of Jesus we are holy. And yet, we are also still sinners. There will come a point when we are more holy than we are now, because as long as we live in this world we still live with the remnants of sin in our lives. (Romans 7:19) The Apostle talks about this dual truth in the life of a Christian in the book of Hebrews:

By one sacrifice he has made perfect forever those who are being made holy. (Hebrews 10:14)

We are both “made perfect forever” and “being made holy.” As Luther said, we are simul iustus et peccator: simultaneously justified and sinners. It is difficult to do, but we must remember both of these truths. If we forget either, at best we fail to give God the appropriate glory, and at worst we wander into either the heresy of perfectionism or the heresy of justification by works.

This relates to the other… hiccup, for lack of a better word. (Again, these are only hesitations. By and large the book is fine and worth reading.) This is basically the question of what relationship we as Christians should have to the Old Testament law. Many, many answers have been given by a whole spectrum of fantastic Christian pastors and theologians (I’ll include some suggestions for further reading on this topic at the end). Farley has his demon write:

Just as you first deceived them, so continue with them. Even if they have dismissed legalistic rules as the means to salvation, they can indeed be taught to retain a law-like system as a means to growth, a catalyst for self-improvement, or a method of pleasing the Enemy. They exchange a prison of steel for a prison of iron. (135)

In broad strokes, I agree with this point. In the same way that justification is by faith alone, so sanctification is by faith alone as well. We do not grow as believers by taking the law and trying really hard to obey it. We grow by increasingly being affected by our faith in the Gospel. (Check out John Owen’s Mortification of Sin for more on that.) And yet, that’s not quite the same thing as saying (as Farley goes on to do) that we completely and totally kick out the Old Testament Law once we become Christians.

And here I’ll make a confession: I’m not entirely sure what I think the relationship between the Old Testament law and the believing Christian should be. To be sure, the Law is a picture of God’s character, and it points us to Christ, and it reveals truths about the covenants God establishes with His people. But should it help shape and define our lives once we’ve come to Christ? Are there aspects of the Law that are useful for us as we grow in our relationship with Christians? Again, I’m not entirely sure what the best answer to these question are, other than I think we should be a bit hesitant to make sweeping categorizations, especially when so many good and faithful Christians continue to disagree on the issue. (See the suggestions for further reading below for a sampling.) Farley especially dances near the danger of dismissing the Law outright. Carried one small step farther one might be tempted (based on his claims) to completely dismiss the Old Testament outright. While he does not go this extra step, he comes closer to it than I’m really comfortable with.

With those two caveats, I still recommend this book. It’s a quick, enjoyable read that encourages us to remember the power and influence of the cross in God’s work of redemption.

Recommended for those who enjoyed The Screwtape Letters.

On Being a Theologian of the Cross by Gerhard Forde

Five Views on Law and Gospel by Various

“Law and Gospel” by John Frame

40 Questions about Christians and Biblical Law by Thomas Schreiner

Dr. Coyle Neal lives in Washington, DC, where he is undoubtedly far too much at peace with his own demons.

January 17, 2013
Middle Earth is Inherited by the Meek
Next Post

January 21, 2013 Christian Scholarship Doesn’t Have to be About Christianity
Recent Comments
1 Comment | Leave a Comment
"hmm interesting and informative information, and would like to add interesting information from myself. I ..."
Steve Andrews Violence and Sports in Netflix’s “Malice ..."
"Fair enough--though I do have to wonder at what point someone who believes in ongoing ..."
cneal Common Grace, 2.50
""... we're not deists and don't believe God has created and then left." Not all ..."
Deist1737 Common Grace, 2.50
"I am aware of those kinds of discussions and statements (and even of the fact ..."
cneal Confronting the American Gospel
Browse Our Archives
get the latest updates from
Schaeffer's Ghost
and the Patheos
Entertainment
Channel
POPULAR AT PATHEOS Entertainment
1