Review of The Democratization of American Christianity by Nathan O. Hatch

For as long as I can remember, I’ve been addicted to the bandwagon. Consequently, here is my contribution to the ongoing Schaeffer’s Ghost discussion of the intellectual state of modern Christianity. If you’ve missed it, Paul Miller started with a post discussing why Christians are stupid. He then followed up with a follow-up (appropriately enough) about how Christians have gotten smarter. Most recently the discussion has turned to reflections on what Christians should get smart about and how Christians should get smart in the first place (hint: the answers are “everything” and “Jesus”, respectively).

Nathan Hatch’s The Democratization of American Christianity (1989) has some useful things to contribute to this discussion. In this book, Hatch argues that within American Christianity the true break with the past comes not, as commonly believed, in the political separation from England in the American Revolution of the 1770s, but rather with the social and cultural redefinitions of the 1780s-1830s. This period, Hatch argues, is the time critical to understanding both modern Christianity and the (unbridgeable?) divide between then (that is, pre-Revolution days) and now. Essentially, this is the era when American Christians decided that they were having none of the aristocratic Christian leadership of the past—the people and the people alone would determine the future of religion in America. No longer would we look for direction from the elites educated at Yale or Princeton and wearing the approved mantle of the old guard while trumpeting the orthodoxy (especially the Calvinist orthodoxy) of the past. Instead, we would advocate a more democratic Christianity that was the result of every man examining the Bible himself and making his own decision about the best way to read it. This fifty-year stretch of American history saw a wide-ranging overthrow of the accepted authorities of the past in the name of the people’s authority to read the Bible, worship, and interact with God as they saw fit. 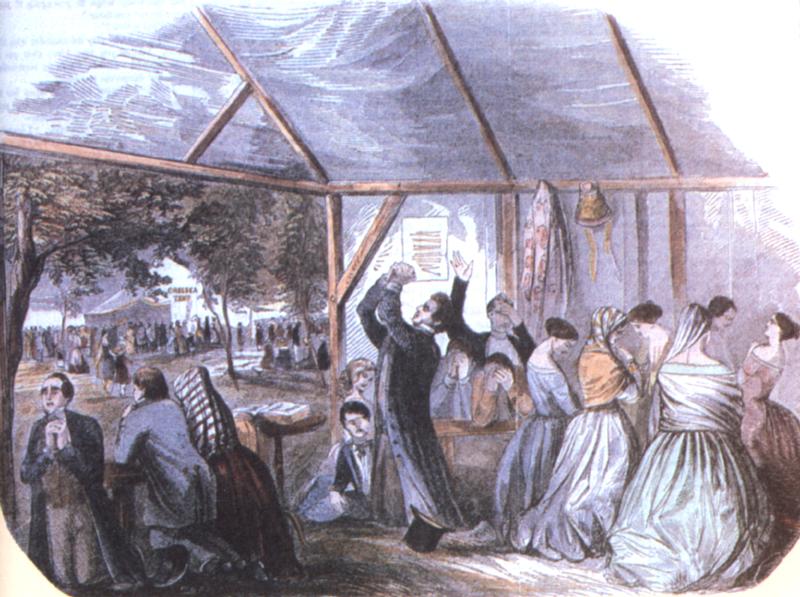 This “democratic impulse”, Hatch argues, explains the rise and stunning success of the Methodists, the Baptists, the black churches, and Mormonism. These  groups appealed to directly to the people, preached in a plain style using simple modern vernacular, and incorporated popular music into church services, all while claiming that  any common man who picked up his Bible and read it by himself (without the tyrannical voice of tradition drowning out his own thoughts) would do the same. The denominations that stuck to their traditional hierarchies and formal practices (Episcopalians, Congregationalists, Presbyterians) withered until they too finally adopted the new methods—if not always the new doctrines.

Back to the matter at hand—that is, the intellectual state of modern Christianity. In the original post in this series, Paul Miller asked the question “where are the evangelical public intellectuals?” Hatch’s book may provide one facet of the answer to that question.

In his last chapter, Hatch discusses the impact of the rise of this democratic spirit on American Christian movements in the early part of the 20th century. Fundamentalism, for example, responded to major challenges to Christianity such as higher criticism and evolutionary atheism not so much by intellectual engagement (though the earliest fundamentalists did some of that, at least) as by direct popular appeal. Are we, they said to Christians, going to let some eggheads in the big city tell us we evolved from monkeys, or are you going to read your Bible and think for yourself? (Not, alas, a direct quote from the Fundamentals, but well in line with its spirit.)

The example of Fundamentalism shows us one possible reason there are so few evangelical intellectuals. We live at the end of nearly two centuries of relying on popular appeal as the definitive criterion for truth in American religion. This populism is in direct opposition to the intellectual life, since by definition there is an aristocratic aspect to the intellectual life.

Now, before you pick up your pitchforks and torches to come set me straight, let me explain. I do not mean by that statement to suggest that the non-aristocratic “common man” is stupid.* I do mean that most aspects of the intellectual life require a good deal of time, effort, and perseverance. (Remember that Plato thought that education for those who engage in philosophy and politics should last until age 50—a far cry from our standard four-year system!) By its very nature, the intellectual life excludes everyone who lacks the time, energy, and ability to dedicate themselves to long-term study. There is an inherent aristocracy built into the life of the mind.

This does not just apply to the specialized and technical disciplines, which I suspect we’d all agree are elitist by nature in any case. When it comes to medicine, the law, engineering, architecture, etc, we allow knowledge to remain within the aristocratic establishment without much dissent. Few object to the ABA or the AMA and the related state-licensing requirements as doorkeepers of the elite guilds. (Though Hatch has several interesting stories about how even those were assaulted in the name of the people in the 19th century.) We even recognize that the “softer” sciences like politics and philosophy are in some ways closed off to the majority, and require a good deal of time and commitment (anyone who’s ever picked up Heidegger without philosophical training would not make that mistake twice).

But when it comes to theology, the American attitude is that no one is going to tell me about God. That field of study has been pulled out of academia and claimed by the masses. Knowledge of God is between the people and God alone, with no intellectual intermediary allowed. As Protestant Evangelicals we might add the disclaimer that it’s between us and God through the medium of Scripture, but the end result is still that we have an ingrained distrust of others—especially others claiming to be smarter and more capable than we are—telling us how to think.

Which in turn suggests a two-sided reason why there are so few intellectual Evangelicals. On the one hand, we are raised in a religious culture which has long denied the value of the inherently aristocratic nature of the intellectual life.** As a result, a low opinion of the intellectual life may be bred into those who would otherwise have the aptitude for as well as an interest in pursuing it. Individuals who would have been great philosophers instead go in for more practical studies: law, the hard sciences, or even ministry. (No denigration of any of those career paths intended!)

On the other hand, even those who do pursue the intellectual life are still a part of the culture which insists that the final arbiter of knowledge is the people. Consequently, I suspect that the few intellections we do have spend a goodly amount of their time and energy working on ways to convince large numbers of people of the correctness of their position, rather than exploring and reflecting upon the deeper aspects of the position itself.*** Which in turn results in a shallower approach to intellectual pursuits than would otherwise be the case.

To bring this lengthy review to a close (apologies for any rambling), the big two take away points are:

I highly recommend The Democratization of American Christianity to any and all pursuing this line of thought.

*At least, I don’t mean to suggest it in this context. To clarify my more general position on the issue: I believe the common man is very stupid. And I don’t think much of the elites either.

** I would be interested to know if anyone has ever done a study to determine how many intellectual Christians in America were actually transplants from European or other cultures less affected by the Second Great Awakening.

***Might this help explain the apparent dominance of apologetics among ‘intellectual’ Evangelicals.? Again, if there is a study on this please drop me a note in the comments, but it is my sense that what few intellectual Evangelicals there are seem to publish many more books either explaining why Christianity is true or attempting to make a particular difficult idea accessible and agreeable to the common man than they do reflecting on the idea itself. Did Francis Schaeffer ever say “I’m going to spend seven years thinking about this subject, and then publish a book that only people who have also spent seven years thinking about it can understand”?

Dr. Coyle Neal lives in Washington, DC, where he hurls nuggets of wisdom down on the unwashed masses from his ivory tower.

March 13, 2013 The Romance of the Noble Savage: The Deerslayer
Recent Comments
2 Comments | Leave a Comment
"We may be entering into that scenario right now. As things fall apart, note that ..."
Barros Serrano The Lost Book
"A book and movie review blog on the Patheos portal, once upon a time called ..."
cneal Common Grace, 3.5
"What is schaeffer's ghost?"
Herrnhut Common Grace, 3.5
"These are good Christian books to read and I will surely add them to my ..."
Don Davies 18 Christian Books the Intellectually Curious ..."
Browse Our Archives
Related posts from Schaeffer's Ghost