Integrity and Fatherhood Beyond the Pines

Integrity and Fatherhood Beyond the Pines April 5, 2013 Kendrick Kuo

Review of The Place Beyond the Pines, Directed by Derek Cianfrance

Luke Glanton (Ryan Gosling) and Avery Cross (Bradley Cooper) have parallel lives, though on the surface Luke is a criminal and Avery a policeman. Luke and Avery both have a woman and child, their mother-in-law lives with them, and they both are absent fathers. But the audience favors Luke over Avery because the former knows and accepts that he’s a criminal, while the latter lives the life of a hypocrite. The Place Beyond the Pines tells the tragic story of these two men and their similar, but essentially different lives.

At the beginning of the film, when Luke learns that he has a son, he leaves his stunt motorcyclist job with a traveling troupe and immediately sets to work in order to provide for his son and Romina (Eva Mendes), the mother. The eventually leads to using his talent for driving recklessly to rob banks and make a quick getaway. This culminates in a bank job gone wrong where he’s cornered into a house in a residential neighborhood. 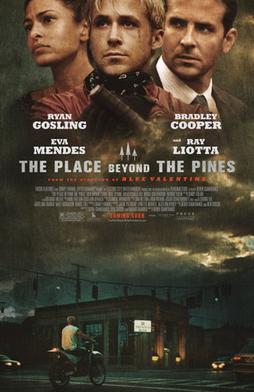 [Spoilers follow] Then enters Avery as the sole cop on scene. Luke is hiding in the upstairs bedroom making a desperate call to Romina, asking her not to tell their son the identity of his father. In the heat of the moment, Avery kicks down the door and in a rushed sequence of events that make it hard even for the audience to understand what’s going on, Avery fires the first shot. Luke unloads his firearm into Avery’s leg and falls out the window to his death on the concrete sidewalk. Avery is the hero and Luke the fallen criminal. Or is that correct role assignment?

Things get complicated. In speaking with the district attorney, Avery lies and says that Luke fired the first shot, thus clearing his name of any shadow of a doubt that his killing was unlawful. This is the first moral compromise, and there are many more compromises to come. But skipping all that, the heart of the film is how these two men are so different, and the legacy they leave their children.

As I said at the beginning, Luke is portrayed in a positive light, not because he robbed banks, but because he was doing it for his son and because he was in many ways true to himself. He knew what he was and he faced that fact and did the best he could. Then take Avery who, despite being on the side of the law, makes small compromises and hence becomes a hypocrite. There are windows of sympathy, especially when he realizes his hand in taking away a father from his son, but this is quickly erased by the fact that Avery is an absent father.

So the first theme I would point out in The Place Beyond the Pines is its morally-grounded sense of integrity. It’s hard not to see the comparisons between the film and the gospel accounts where Jesus is the friend of sinners, but the adversary of the religious folk (read highly-regarded in society). Luke was perceived as the criminal who received his just deserts, whereas Avery was the representative of law and order hurt in the line of duty. Jesus’ primary charge against the pharisees was hypocrisy. They were white-washed tombs full of bones (Matt. 23:27). On the other hand, the tax collectors and prostitutes were surely sinful, but at least they knew who and what they were and the desperate mercy they required.

Luke is absent because he has no choice. Avery chooses that path. First as a cop, he spends very little time at home despite the clear tension it’s caused in his marriage. Then next, 15 years later, as he runs for attorney general, we learn that his son is living with his mother after a divorce. When Avery’s ex-wife tells Avery that his son wants to live with him and that it’d be good for their child, Avery closes that door of opportunity in order to prioritize his campaign and career.

The Luke-Avery impact has ripple effects in the lives of their sons, Jason Glanton and AJ Cross. The two sons meet in school and begin getting into trouble with drugs. Eventually Jason discovers who AJ is–the son of his father’s killer, and Jason decides to take revenge. How does it end? I’ll leave that up to our readers to see for themselves.

But the fatherhood issue constitutes the second major theme of The Place Beyond the Pines. Fatherhood is to be cherished, not squandered. Luke forsook the independent life that he might care for his son whom he loved while Avery forsook the the son and chose the independence of career and ambition.

There are sociological studies and family value op-eds out there that I don’t need to rehash on this blog about the problem of single-parent households and the havoc broken families bestow on children and society-at-large. What I appreciated about The Place Beyond the Pines was the tackling of this issue in the context of integrity.  Avery may not be a criminal, but that clearly doesn’t excuse his poor record when it comes to raising his son. The lack of public sin is no bandage for private sin.

On top of this, the Bible portrays fatherhood as a reflection of God’s fatherhood. So when fathers fail in their responsibilities to love their children well, they lie about God. In this sense, fatherhood is a heavy burden and should be shouldered with care.

The film leaves us with some good questions. Before judging Luke, we should look first to our own affairs; and before judging Avery, we should recognize our own lack of integrity. And isn’t that was Christ calls us to do? See the plank in our own eye, realize our desperate need, and run to Christ.

April 5, 2013 Jurassic Park Is Back and Better Than Ever
Recent Comments
0 | Leave a Comment
"hmm interesting and informative information, and would like to add interesting information from myself. I ..."
Steve Andrews Violence and Sports in Netflix’s “Malice ..."
"Fair enough--though I do have to wonder at what point someone who believes in ongoing ..."
cneal Common Grace, 2.50
""... we're not deists and don't believe God has created and then left." Not all ..."
Deist1737 Common Grace, 2.50
"I am aware of those kinds of discussions and statements (and even of the fact ..."
cneal Confronting the American Gospel
Browse Our Archives
get the latest updates from
Schaeffer's Ghost
and the Patheos
Entertainment
Channel
POPULAR AT PATHEOS Entertainment
1