The General: A Train Full of Laughs

Review of The General, Directed by Buster Keaton

In our effort to blog our way through the American Film Institute’s Top 100 Films, I picked out one of the few movies on the list I had not only not seen, but never even heard of:  The General (1927).  For some reason I expected a somber silent drama about some military officer’s dreary, tragic life.  I think the one-word nondescript title sounds drab and pretentious, so I assumed the movie would be too.

The General (available on Netflix streaming) turns out to be a delightful little comedy that brightened my day.  It stars (and was directed by) Buster Keaton.  I confess I had only the dimmest notion that there was some famous film personality by that name a long time ago, but I could say nothing more about him.  Alas, the limits of my education.

The first thing I noticed is that Keaton doesn’t act like a silent film star.  When I think of a silent film actor, I think of Charlie Chaplin (yes, I’ve heard of him), and his exaggerated histrionics.  Without words, the silent actors had to make their body language do the talking.  Even if you’ve never seen Chaplin, you’ve seen Chaplin—you could identify The Tramp with his musical way of walking, twirling his cane, tripping up, and overreacting to everything and everybody around him.

Keaton is the opposite of Chaplin.  He under-reacts.  In an early scene he knocks on his girlfriend’s front door, adjusts he clothes, and discovers that she’s been standing behind him the whole time.  I expected a wildly comic startled reaction.  Instead, Keaton looked slightly nonplussed, blinked a few times, and then walked in with great dignity. 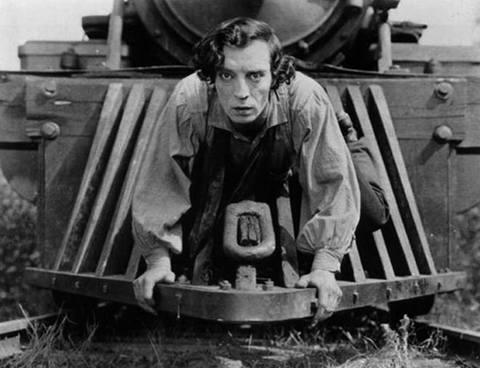 That’s when I Googled to discover that Keaton was nicknamed The Great Stone Face for his famous deadpan.  Keaton, in this movie, has his train stolen from him, embarks on a chase straight through an epic Civil War battle, recovers it, and hardly cracks a frown or a smile the entire time.  I loved this movie.

Keaton plays a train conductor who tries to enlist at the outbreak of the U.S. Civil War.  The army turns him down because he’s more valuable with his train (the train’s name is The General).  His girlfriend doesn’t understand, and he suffers the scorn of the town for his supposed cowardice.  Then his train is stolen by the enemy and he sets out in pursuit.  Forty minutes of train-related antics ensue which are, by and large, quite funny and creative.  Keaton returns in time to warn his compatriots of an imminent enemy attack, and the film culminates with an impromptu battle and, of course, a train wreck.  Keaton proves his bravery, saves the day, and gets the girl.  Considering it was made in 1927, the battle and other effects have held up pretty well.

Is this one of the best movies ever made?  I doubt it.  I expect this makes it on to the lists (it’s also on the IMBD and BFI lists, and one of Roger Ebert’s Great Movies list) because it is a classic and entertaining example of the silent movie era.  I thoroughly enjoyed the movie and my kids sat and watched much of it with me, enraptured despite the silence.  There is something universal in simple physical comedy, perhaps, which accounts for its easy charm almost a century after it was made.

Alas, special effects and CGI have ruined physical comedy:  nobody makes movies anymore in which the point is the fanciful manipulation of bodies and objects for entertainment value.  We all know such spectacles can be manufactured, and so they no longer impress.

One thing bothered me about the film.  Keaton and his compatriots are the Confederacy; the enemy are the Union troops.  I know, I know, it’s just a comedy, and there are plenty of people who think it is okay to celebrate a bit of Confederate heritage.  I’m not one of them.

That aside, there is very little material in this movie that offers anything for theological or moral reflection.  It’s too light-hearted, too simple for that.   If you have an hour to spare and happen to like trains, this makes for a funny, clean family movie.  Which, considering what else is on offer, is actually quite an achievement.

May 2, 2013 At Any Price: Interview with Dennis Quaid and Ramin Bahrani
Recent Comments
0 | Leave a Comment
"These are good Christian books to read and I will surely add them to my ..."
Don Davies 18 Christian Books the Intellectually Curious ..."
"hmm interesting and informative information, and would like to add interesting information from myself. I ..."
Steve Andrews Violence and Sports in Netflix’s “Malice ..."
"Fair enough--though I do have to wonder at what point someone who believes in ongoing ..."
cneal Common Grace, 2.50
""... we're not deists and don't believe God has created and then left." Not all ..."
Deist1737 Common Grace, 2.50
Browse Our Archives
Related posts from Schaeffer's Ghost