After Earth’s Absence of Emotion

Review of After Earth, Directed by M. Night Shyamalan

If a naïve and unassuming moviegoer were to attend a showing of After Earth and, appalled by the glaring deficiencies of the movie, leave before the credits rolled, he might be forgive for believing that the dialogue was written by Deepak Chopra and  the action by a space-fantasy-obsessed Dr. Phil.  The father exhorts his son with bland and vaguely spiritual advice: “find your center. This creation will be yours,” and the son responds by directly disobeying the instructions of his father.  Enacted on earth, this sounds like the typical plotline of a Jerry Springer episode. But place it in space, and you have After Earth, the most recent, and rather disappointing, cinematic attempt by M. Night Shyamalan.

After humans have so irredeemably altered the earth’s atmosphere through exploitative resource collection, mankind must move to colonize a new planet on which to live.  This planet is inhabited by aliens who are quite understandably unimpressed with mankind’s attempts to colonize them, and thus deploy the ursa, a species of human-killing alien monsters who home in on their human targets by tracking the scent put off by their pheromones with they are afraid. On a training mission, Kitai Raige (Jaden Smith) and his father Cypher Raige (Will Smith) crash land on earth, where Kitai must travel brave the hostile flora and fauna to recover a beacon that will rescue them. 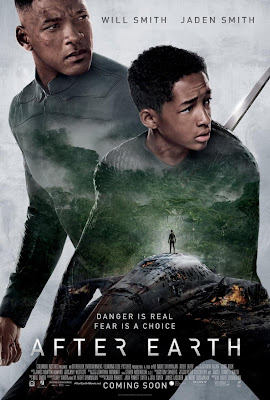 It is a deeply risky move to revolve an entire movie around only two characters who fully monopolize the screen time.  Nevertheless, Will Smith showed in I Am Legend that he is able to carry a movie by himself. Shyamalan, however, negates Smith’s natural action prowess by making the inconceivable decision to strap Will Smith’s character into a chair while he mends a broken leg for the entirety of the movie. Therefore, rather than lay the blame at the feet of Will Smith or view this movie as anything more than a minor roadbump in his otherwise luminous career, it is better to see this as indicative of the unfortunate decline of Shyamalan’s career which began with the creative and auspicious Unbreakable (2000), Signs (2002), The Village (2004), and Lady in the Water (2006) but has now devolved into this clichéd, slow-moving cinematic disappointment.

There is a deliberate lack of any but the simplest emotional development among the characters. Cypher’s military prowess is facilitated by his absolute lack of fear. The plot-driven absence of fear smudges over into an inexplicable and unforgivable lack of nearly every human sensibility, which renders him entirely aloof and unrelatable. The ursa cannot see him because he is entirely bereft of fear and therefore invisible to their fear-pheromone-sensation-organs, yet if the ursa do not notice him, nor does any audience concerned with anything approaching human emotion. Shyamalan attempted to create a fearless Achilles; instead he created an impassible Spock.

The central drama of the movie is Kitai’s dramatic trek across earth and the accompanying coming-of-age story therein entailed. Yet his true moment of redemption dangles disconnected from any broader theme in the movie.  The director missed an open and valuable opportunity to tie the son’s conquering of his fear to the father’s expression of love for his son.  Cypher, ever the unflappable military hero, had called his son “cadet” the entire movie. Lost is the moment where he calls him “son” and thereby eviscerates his son’s fears by investing him with the confidence of a proud father.

Most unfortunately is the fact that the highpoint of redemption and the highest desideratum of the characters is simply the absence of fear. This is the quality that triumphs over the alien enemy intent on destroying humans: the absence of fear.  The emotional climax is a mere embrace between father and son at the last, entirely contrived and heavy-handed, scene. Lost entirely is the Christian notion that our loves, not our fears, are the central drama of a human life. Thus the range of emotions experienced is truncated and stunted, with the result that audiences are not even for a moment tempted to sympathize or identify with the characters.

Justin R. Hawkins from Georgetown University in 2011 with a degree in Government. He is now in the Master’s of Arts in Religion program at Yale Divinity School, concentrating in Philosophical Theology. He is from the implausibly small town of Breinigsville, PA, which is every bit as rural as it sounds.