Christ on Kane: On the Meaning of Rosebud

To write about Citizen Kane is to invite scorn for one’s ignorance and presumption.  How can anything new be written about this film?  How can I presume to have something to say?  Don’t you know this is the greatest film ever made?

According to the American Film Institute, it is indeed the greatest.  And it was the greatest on the British Film Institute’s decennial poll for 50 years, until unseated last year by Hitchcock’s Vertigo.  It stands at a comparatively modest #45 on IMDB’s list.  Oddly, for a film of such towering reputation, it received comparatively little recognition in its day.  It won a single Oscar—for writing—and was recognized only by the National Board of Review and the New York Film Critics Circle as the Best Picture of 1941—partly, they say, to snub the young and arrogant Orson Welles, who was a Hollywood outsider.  But the film’s reputation soared as the years went by, and anyone who loves movies has to have an opinion about why Kane really is, or isn’t, the greatest of all time.

Citizen Kane is a biopic of Charles Foster Kane, a fictional media mogul loosely modeled on William Randolph Hearst (think Rupert Murdoch, with the wealth of Bill Gates and the eccentricity of Howard Hughes).  The story has a bizarre premise so fleetingly established that I had to go back and check:  we learn in few brief lines of dialogue that Kane’s mother inherits a gold mine in Colorado and agrees to lease it to a huge eastern bank for development in return for it assuming guardianship over her son, who will need a real education back east in order to manage the massive fortune he is to inherit.  Kane is thus orphaned by wealth, his parents divesting themselves of him for his own good.  He looses a mother’s love but gains education, connection, and titanic riches.  He is literally raised by a bank.

That’s just the beginning.  Kane uses his wealth and connections to become everything his bank daddy hates.  He becomes a yellow journalist, a scandal monger, and a populist politician.  He assumes control of a media empire, buys influence, and uses it to win the praise and admiration of the common man.  An affair bring him down: he loses an election after being caught with an amateur opera singer.  He vows to have revenge by turning his mistress (now wife) into a celebrated professional performer, throwing his massive wealth and media influence behind the effort to turn her into a star.  She resents being an instrument his ego trip and leaves him.  He fades into isolation, dementia, and obscurity, until he dies with the words “Rosebud” on his lips.

And that is where the movie opens. 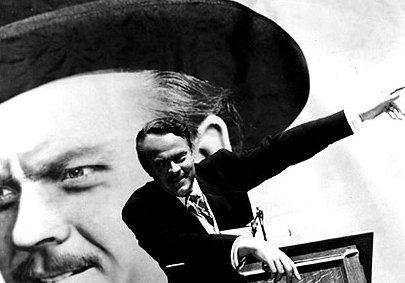 Part of the intrigue and charm of Kane is its unconventional structure.  The story is told in a spiral.  The movie opens with his death.  Then we see a newsreel covering the facts of his life.  The rest of the movie is told in a series of flashbacks by different narrators who recall different scenes from Kane’s life, not in chronological order.  We review the same seasons in his life more than once, circling back over familiar ground to swoop in closer to the heart of his story in an ever tightening gyre.  The effect is kaleidoscopic, impressionistic, and epic.  It’s also a little confusing.

If you took the story and laid it out chronologically, Citizen Kane is a fairly straightforward, classical tragedy about a great man undone by a gnawing flaw.  What is his flaw?  What is the meaning of Charles Foster Kane’s life?  And what is the meaning of his last, infamous, enigmatic utterance, “Rosebud”?

Those questions provide the frame for the whole movie.  We see the story through the eyes of a reporter on assignment to find out who the real Kane was, and what his last word meant.  [Major spoiler below.  If you’ve never seen Kane and don’t know what “Rosebud” is, stop reading, go watch the movie, and come back.]

Kane himself gives a sort of confession early on when Thatcher berates him because his irresponsible journalism is undermining his own stock portfolio.  Kane replies that he is, in fact, two people.   The conversation starts out as light banter between two old acquaintances.

As Charles Foster Kane, who has eighty-two thousand, six hundred and thirty-one shares of Metropolitan Transfer – you see, do have a rough idea of my holdings – I sympathize with you. Charles Foster Kane is a dangerous scoundrel, his paper should be run out of town and a committee should be formed to boycott him.  You may, if you can form such a committee, put me down for a contribution of one thousand dollars.

On the other hand – I am the publisher of the Enquirer. As such, it is my duty – I’ll let you in on a little secret, it is also my pleasure – to see to it that decent, hard-working people of this city are not robbed blind by a group of money-mad pirates—

Here Kane and Thatcher both stand simultaneously and the camera rises with them—a move that injects the scene with sudden tension and gravity.

—because, God help them, they have no one to look after their interests!  I’ll let you in on another little secret, Mr. Thatcher.  I think I’m the man to do it.  You see, I have money and property.  If I don’t defend the interests of the underprivileged, somebody else will – maybe somebody without any money or any property…

This is Kane’s self-image.  He is schizophrenic, a fabulously wealthy playboy titan of capitalism who moonlights as a champion of the oppressed, the orphan, the widow, and the underdog.  Charles Foster Kane is Batman.

Like his superhero parallel, Kane’s pathos is the blossom of a seed sown by childhood trauma.  Kane’s parents weren’t murdered; they were stolen from him by a bank; so he dedicates his life to revenge on everything the bank stands for.  He was bereft of childhood innocence, the simple pleasures of sledding in the snow, the carefree days of idle boyhood, so he spends his adulthood as an overgrown boy, irresponsibly collecting women and art and scandal for the fun of it. Most of all, he was torn from his mother’s love, and spends his life manipulating others into loving him.  As one character describes Kane:

That’s why he did everything. That’s why he went into politics. It seems we weren’t enough.  He wanted all the voters to love him, too.  All he really wanted out life was love.  That’s Charlie’s story – it’s the story of how he lost it.  You see, he just didn’t have any to give.  He loved Charlie Kane, of course, very dearly – and his mother, I guess he always loved her.

That’s Kane’s tragic flaw:  the gnawing neediness to be loved by others.  That’s why he made himself into a populist champion: to win the adulation of the crowds.  Kane has an unquenchable thirst for affirmation, to be told that he is magnificent, to be coddled and held, to capture and hold tight to that feeling you get when you are happy and you share your happiness with people you love.

Kane names this feeling “Rosebud.”  Rosebud is the name of the sled Kane plays with as a young boy.  We catch a glimpse of it in the only scene of Charlie’s boyhood.  He is running, shouting, sledding, and doing the things rambunctious boys do while his parents are just inside.  It is a scene of idyllic, exuberant play.  “Rosebud” is a little boy’s shorthand for everything that scene contains.  And it is a dying man’s recollection of everything he lost and everything that seemed further out of reach the more he grasped after it throughout his life.  The more Kane tried to be loved, the more isolated he became.

Citizen Kane is a tragedy of Matthew 16:25-26.  Jesus said “For whoever wants to save their life will lose it, but whoever loses their life for me will find it. What good will it be for someone to gain the whole world, yet forfeit their soul? Or what can anyone give in exchange for their soul?”  Kane never understood that joy is the product of sacrifice.  He thought joy should always be the free and easy kind he remembered as a child, but that only breeds narcissism and selfishness if we pursue it into adulthood.  Kane grasped after his own happiness, and lost it; he inherited the whole world and could never let go; he sought to save his own life, and was damned.  Kane knows it:  he says to a friend at one point, “You know Mr. Berstein, if I hadn’t been very rich, I might have been a really great man.”  Kane is the rich young ruler who walked away from Jesus.

Is Citizen Kane the greatest movie ever made? It doesn’t have a single explosion, wizard, vampire, or lightsaber.  It does have a sober and true estimate of man, a poignant story expertly told in way only the language of cinema could express, and a memorable, almost haunting, lesson.  You can ask for little more from a great work of art.

July 1, 2013 Want an introduction to Augustine's theology?
Recent Comments
1 Comment | Leave a Comment
"These are good Christian books to read and I will surely add them to my ..."
Don Davies 18 Christian Books the Intellectually Curious ..."
"hmm interesting and informative information, and would like to add interesting information from myself. I ..."
Steve Andrews Violence and Sports in Netflix’s “Malice ..."
"Fair enough--though I do have to wonder at what point someone who believes in ongoing ..."
cneal Common Grace, 2.50
""... we're not deists and don't believe God has created and then left." Not all ..."
Deist1737 Common Grace, 2.50
Browse Our Archives
Related posts from Schaeffer's Ghost