On the Virtues of Bloodthirsty Soviet Propaganda

Review of The Battleship Potemkin, Directed by Sergei Eisenstein

One of the great things about Netflix and YouTube is the instantaneous access to a wealth of old films that you used to be able to see only on a beat-up VHS player at your local university library. Seeing as we at Schaeffer’s Ghost make a pretense of telling you which movies are good which aren’t, I felt a duty to watch some of the old ones to beef up my cinematic education. That’s how I found myself spending a Sunday afternoon watching Soviet propaganda from the 1920s.

The Battleship Potemkin (1925) is, as any introductory book on film history (or even just Wikipedia) will tell you, a landmark achievement in early film. It dramatizes the true story of a mutiny aboard a Russian warship, the eponymous Potemkin, during a broader anti-Czarist uprising in 1905. The mutiny and the 1905 uprising came later to be seen as a precursor to the successful Bolshevik Revolution, and thus to the founding of the Soviet Union in 1917. Eisenstein’s film, made less than a decade after the USSR’s birth, is a celebration of the new nation’s mythical martyrs.

Much of the film’s historical significance was probably lost on me. I understand that Eisenstein pioneered many editing techniques; I’m not qualified to comment on that one way or another. Its historical significance is a large reason it has an enduring place on Roger Ebert’s list of Great Movies and stands at #11 on the British Film Institute’s list of all-time greats. But I am more interested in another question: is the film watchable today? Can a casual watcher get anything out of it?

Barely. I did notice that the film moves along at a fairly quick pace, unusual for an old film. The film has a lot of rapid cuts, which gives the sense of fast-paced action—something contemporary directors have taken to a ridiculous extreme. It tells a generally engaging story, made the more so because we know it is (supposedly) based on true events.

The most famous part of the movie is the massacre on the steps of Odessa. When Potemkin docks at Odessa, Eisenstein shows a spontaneous outpouring of communist love and generosity: the city flocks to the ship, spontaneously gives food and supplies to the hungry sailors, and celebrates their newfound sense of brotherhood and comradeship. Then the czarist troops get wind of the uprising. They march on the citizens of Odessa and gun them down.

The massacre takes up something like a quarter of the movie. It is almost Tarantino-esque in its attention to bloodshed and physical suffering. The camera singles out from the fleeing civilians young children, old women, a baby in a carriage, and a mother—all so that we can watch them die. It is black and white and silent, and absolutely horrific. I had no idea movies were so violent as early as the 1920s.

That is what Eisenstein was going for. He wanted to make his viewers mad—mad at the heartless cruelty of the czarists for murdering helpless civilians just because of their simple-hearted generosity to the hungry sailors. The lesson: communism is at war with the world. You can’t trust anyone. They’re out to get you. Be afraid, be mad, and be ready for a fight. This is propaganda at its purest.

The movie is famous largely because of the power of that sequence—and it is powerful. But I find this odd, for several reasons. First, the sequence is preceded by the fatuously naïve scene of the citizens flocking to the Potemkin in a spontaneous outpouring of voluntary communism. This sequence is so absurd, so at odds with human nature, so childishly dumb, that it undermines much of the power of what comes later.

Second, the massacre itself never happened. The mutiny on the Potemkin was a real historical incident, but there was no massacre on the steps of Odessa afterwards. Roger Ebert wrote “That there was, in fact, no czarist massacre on the Odessa Steps scarcely diminishes the power of the scene.” I disagree. It dramatically diminishes the power of a supposedly historical scene when you know that it was completely fabricated. 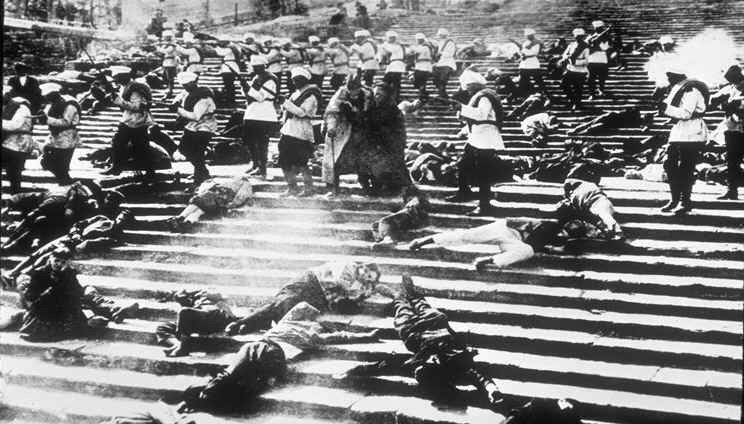 The Battleship Potemkin is propaganda, which is why it is fiction. The director, compelled to force the brute facts of history into his preconceived ideological views, resorts to just making stuff up. He makes up a fanciful story of spontaneous communism when the citizens of Odessa joyfully give their goods to help the sailors, and then he makes up the equally unreal story of the massacre to get us good and mad at the evil capitalist system that treats such good people so poorly.

June 3, 2013
Iron Man 3 and the Obsession with Scientific Progress
Next Post

June 7, 2013 The Kings of Summer, Masters of Themselves
Recent Comments
0 | Leave a Comment
"These are good Christian books to read and I will surely add them to my ..."
Don Davies 18 Christian Books the Intellectually Curious ..."
"hmm interesting and informative information, and would like to add interesting information from myself. I ..."
Steve Andrews Violence and Sports in Netflix’s “Malice ..."
"Fair enough--though I do have to wonder at what point someone who believes in ongoing ..."
cneal Common Grace, 2.50
""... we're not deists and don't believe God has created and then left." Not all ..."
Deist1737 Common Grace, 2.50
Browse Our Archives
Related posts from Schaeffer's Ghost