Wall-E was ranked the best movie of last decade by Time. It won the Oscar, the Golden Globe, and the BAFTA for Best Animated Film. It’s #59 on IMDB’s list of the greatest movies of all time. It won the Golden Tomato award—an award that goes to the movie that was the most favorably reviewed by all critics included on the Rotten Tomatoes website. It made over a half of a billion dollars at the global box office. Everybody loves Wall-E. Except me.

Don’t get me wrong. The movie is exceptionally well made. The opening 20 minutes of quasi-silence is brave and brilliant. The image of Wall-E coasting through space and leaving ripples in a pool of luminescent blue stardust is poetic and beautiful. The dance between Wall-E and Eve is playful and elegant.

It’s just that the movie is so unremittingly earnest; the romance so gratingly cute; the story so insistently pure that it grows saccharine and sickly fast.  Wall-E’s virtues shine on first viewing; its flaws glare through afterwards. This is the least re-watchable film in the Pixar opus.

The movie is a romance between the trash compacting robot Wall-E, who is left on an abandoned earth to clean up the mess humanity has made of it, and EVE, a new, sleek robot sent to check for signs of new life. Wall-E follows EVE back to the mothership where humanity now resides; shenanigans ensue; the lovers are reunited; and the human captain learns the importance of returning to earth to care for the mess that humanity had carelessly left behind.

The problem is that the movie is intent on being a message movie with a tidy, progressive moral that it becomes, like most things progressive, self-righteous and preachy. Big box stores are evil. Trash is evil. Nature is good. Consumers are stupid and fat and greedy.

I’m not complaining that the movie has a message. All movies do: by definition, stories reflect the worldviews of their culture and their authors. That’s why we bother analyzing them. Nor am I, for the most part, complaining about the specific messages in Wall-E. I also like nature, dislike trash, and prefer personalized, local, organic, zero-emission, artisanal products over the ones I can actually afford. 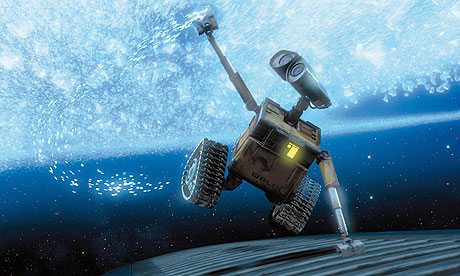 But when I go to the movies, I want to be entertained, not preached at. The messages in stories are supposed to be implicit; they are supposed to emerge wordlessly from the resolution of the story and the growth of the characters so that we hardly know we’re being educated and edified while we’re being entertained. But Wall-E is only momentarily entertaining: when Wall-E’s natural curiosity lets us see a garbage dump as a trove of wonders; when he floats through space; when we behold the mother of all cruise ships as the apogee of technological advancement.

That means the message is front and center for the rest of the movie. In between and overtop of the few moments of magic are many more moments reminding us how fat, dumb, lazy, and stupid we are for shopping, eating, sitting on our couches, and watching TV. The back story about earth’s devastation is a little parable about how evil corporations are. Obese people float by on their hover-couches, oblivious to others and inured to relationships because their every need is catered to by countless robots and their attention monopolized by personal TV screens that look a lot like iPads.

Add to this another cinematic sin: the movie, having chugged along without a villain for most of its running time, invents one in the last twenty minutes (the ship’s autopilot, designed in homage to HAL from 2001) and lurches towards a contrived climax. It seems forced and awkward, as if some executive saw an early print and realized how preachy it was and ordered the invention of a villain to deflect some of the sanctimony away from humanity and onto our robotic creations.

This wouldn’t bother me so much except that everyone loves Wall-E. The collective love-fest with Wall-E is the offspring of PIXAR’s reputation crossed with massive cultural groupthink. We’ve been conditioned to think of PIXAR films as deep, sensitive, and touching; and as soon as the first critics started raving about how wonderful Wall-E was, we echoed and re-echoed that wisdom until we all believed it and all saw it in the movie. Not me. Give me Nemo or Incredibles any day.

June 21, 2013 You’re Not Good Enough, You’re Not Smart Enough, and Some People Don’t Like You: The Refreshing Realism of Monsters University
Recent Comments
2 Comments | Leave a Comment
Browse Our Archives
Related posts from Schaeffer's Ghost