A Review of E-Team, screening at the AFI DOCS documentary film festival

AFI DOCS, the documentary film festival formerly known as Silverdocs, has been undergoing a rebirth of sorts the past couple of years, changing its name and expanding beyond the AFI Silver theater in Silver Spring, Md., to several venues in downtown Washington, D.C.

Among other changes this year, AFI DOCS has labeled three of its 84 titles Spotlight Screenings, the first of which, E-Team (which stands for “Emergencies Team”), focuses on the efforts of Human Rights Watch workers to address recent atrocities in Syria and Libya. The film focuses on the efforts of Human Rights Watch workers to get the facts of those incidents confirmed and publicized. It’s a noble undertaking, putting the workers’ lives at risk in pursuit of the truth, but it’s also the type of documentary that allows viewers to draw no other conclusion based on the information presented. In other words, E-Team is a work of advocacy—the kind of documentary designed not just to raise awareness, but to lead the viewer to embrace the cause being presented. As such, the film, if rather strangely structured, is mostly effective, but it also will leave some viewers wondering what’s been left out of the glowing portrayal of Human Rights Watch.

E-Team begins with a mass slaughter in Syria in 2013. Husband and wife Human Rights Watch team members Anna and Ole head to the site of the bombing and begin interviewing witnesses. “God, please curse this regime,” says one woman, while another mourns the death of his daughter among more than 200 other victims of the attack, which the survivors blame on Syrian leader Bashar al-Assad’s forces.

The film then shifts to two years earlier, as the Syrian crisis was worsening. Anna, convinced the world can’t wait to act, sneaks across the border into Syria and makes her way to the site of an aerial bombing attack to begin her on-the-ground interviews of eyewitnesses. (We’re told that Human Rights Watch never relies solely on one witness testimony but always confirms what happened through multiple eyewitness accounts.) She wins the eyewitnesses’ trust by covering her head and face—a practice she calls “outrageous” but necessary to get her work done. (Watching her don the coverings worn by Syrian women, I was reminded me of Paul’s words in 1 Corinthians 9: 19-23.) She’s also encouraged to heed the advice of a Syrian man not to expose her leg during the interviews. “If they see her bare leg, they’ll get distracted. They’ll forget their testimony,” he says.

E-Team moves from Syria to Berlin and Libya, spending time with Human Rights Watch members Pete, a weapons expert, and Fred, who speaks openly about the ups and downs of publicizing atrocities and trying to see that those responsible are brought to justice. When he gets discouraged, he recalls the report he gathered in Kosovo during the Clinton administration that was picked up by the New York Times and discussed in the White House before the president took action in that region. “It seems hopeless today, but you never know how might play out,” says Fred of one ongoing humanitarian crisis.

The Human Rights Watch mission as presented in E-Team is admirable, but outside of some sham questions posed toward the group during a press conference in Russia, no skepticism is allowed in E-Team—adulation is the only proper response to the assembled footage. The film’s few humorous moments are a welcome respite from the misery of the incidents Human Rights Watch spotlights, but a side story about a pregnancy for Anna feels awkwardly worked into the story, almost as if it were designed to give E-Team a happy ending.

“What is truth?” asked Pilate of Christ (John 18:38)—perhaps history’s greatest example of evading and denying testimony that makes us uncomfortable. E-Team shows how one group of individuals seeks to determine and broadcast difficult truths about the treatment of the weak at the hands of the powerful. The cause is worthy, but the film’s one-sided portrayal of its subjects means that the movie falls far short of great.

June 27, 2014 Drones locks on, arms, and misfires
Recent Comments
0 | Leave a Comment
Browse Our Archives
get the latest from
Schaeffer's Ghost
Sign up for our newsletter
POPULAR AT PATHEOS Entertainment
1 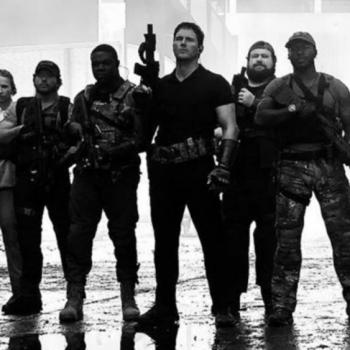