This is the story of how the movie Jupiter Ascending was written.

Two little boys got together and said, “Wouldn’t it be cool if we could rollerblade and fly at the same time? And isn’t outer space awesome? And isn’t Mila Kunis hot? Let’s make a movie!”

OK, not really, but might as well have been.

Jupiter Ascending was an awkward travesty of a movie — at times painful to watch, with plot holes galore.

I will attempt to explain the storyline, but potential moviegoers should be warned: There are about 20 scenes in a row of other characters just explaining how the universe works to the main character, Jupiter Jones (Mila Kunis), who has recently discovered she is some type of galaxy princess. This makes parts of the film tedious, and the following summary drastically simplified.

Jupiter works for her mother’s house-cleaning business and yearns for a larger life. Little does she know a wealthy overlord of the universe wants her dead.  Lucky for her, a handsome wolf-man with cool sky-skating boots, Caine (Channing Tatum), comes to save her, whisking her out of Chicago after a drawn-out, seemingly never-ending battle with the wealthy overlord’s minions. Thanks to a swarm of bees who obey her command, Jupiter and Caine discover she is what amounts to Queen of the Earth. This is why the overlord wants her dead, and why Caine has been hired by the overlord’s younger brother to capture her. Turns out this entire well-heeled family has designs upon Jupiter, as she is the genetic reoccurrence of their mother — a phenomenon that has spiritual significance in this universe. Jupiter spends the rest of the movie trying to escape the family’s clutches and claim the earth as her own so that the ruling dynasty doesn’t decide to “harvest” it — kill all the humans to replenish their genetic fountains-of-youth. Oh, and of course, she also falls in love with Caine, in what is perhaps one of the most cookie-cutter romantic plot lines ever slapped upon a sci-fi script.

It’s been a rough few years for the Wachowskis, the forces behind Jupiter Ascending who rose to fame with The Matrix. Their 2012 movie Cloud Atlas was a bungled time-travel film, and now they’ve bungled their space film as well.

It started with an interesting idea for a sci-fi world — corporate greed and bureaucracy rule, and the greedy billionaires of the universe don’t bat an eyelash while killing millions of other human beings. They carry out these genocides in order to have the genetic material to refresh their cells — essentially granting themselves eternal life with a gene bath. As one of the characters says, time is the most precious commodity in the world. How much would you pay for an elongated life? It’s a great concept.

Unfortunately the idea was ruined with a trite romance, predictable dialogue and deus ex machina moments galore. The latter had someone in our theater shouting out “What!?” after Jupiter manages to zoom away in a spaceship from a potential captor — and the entire audience broke into laughter. Not a good sign for a movie.

And the film was corny — so much so that my action-movie-loving husband said in the first half hour, “This is corny.” A choice example of some of the cliche lines: “If she is who she says she is, we’re not getting off this planet.” Or this real heart-warmer from Jupiter, after Caine calls her “your majesty”: “That’s interesting… when other people say it, it makes me uncomfortable. But when you say it… I don’t know.” Gag.

Jupiter Ascending was a disappointment. I love a good sci-fi movie with a philosophical bent. The plot problems and bad dialogue ruined what potential it had. 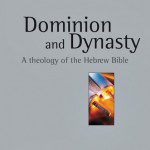 February 4, 2015
"Dominion and Dynasty": What the Old Testament is all about
Next Post