“Grandma” searches for a semblance of love amid tragic dysfunction

“Grandma” searches for a semblance of love amid tragic dysfunction August 28, 2015 Andrew Collins

As an evangelical Christian, Grandma is not a simple film to review. It tells a decidedly progressive story full of progressive characters. And they all have problems.

The story starts on the heels of Elle Reid’s breakup with her much-younger lesbian girlfriend. Elle (played wonderfully by Lily Tomlin) is a lifelong academic and poet. She has about $40 to her name, having just paid off all her debts and cut up her credit cards in protest to enslaving power of capitalism (or something to that effect).

Then her granddaughter Sage (Julia Garner) shows up, announcing that she needs $600 because she is pregnant and wants to get an abortion. She doesn’t want to go to her mother because obviously “she’ll kill me.” Sage has already made an appointment at a clinic later in the day, and so she and her grandmother set off on a quest full of old friends and lovers to try and get the money.

According to writer and director Paul Weitz, the focal point of the movie is this: “How do you get past grief?” It’s a compelling and important question. Elle’s partner of 30 years passed away about a year before the story begins, and her ghost haunts Elle, her daughter ______, and Sage with warm memories.

I don’t want to downplay the role Elle’s partner plays in shaping the film’s characters, but the real elephant in the room is found in the inciting incident: the issue of abortion. Here Weitz made a specific effort to create realistic characters that face realistic emotional consequences for their decisions. Grandma cautions Sage to think carefully about her decision to abort, because it is something she will likely think about in some way or another every day for the rest of her life. It’s a good thing she offers this counsel early in the story, because it seems like Sage’s choice is initially more of a kneejerk reaction to take the easiest way out. Her situation had escalated from a crappy, that’s-just-how-life-goes relationship with her sort-of boyfriend, to world-shattering nightmare. Throughout the rest of the film, she wrestles with the choice of pregnancy, at one point wondering (in typical, but realistic, teenage angst) if she will go to hell for this.

All the way up to the clinic the possibility that Sage will change her mind is firmly before us. In the interest of avoiding spoilers, I won’t say what she decides to do in the end, but suffice it to say that to Weitz’s credit, he treats the issue with utmost seriousness. As he said in a Q&A session after a press screening in Washington, D.C., “I feel like we dehumanize the actual people involved in these situations, which are political or cultural flashpoints, and I was really keen not to do that.

Weitz’s comments are instructive for those on both sides of the debate. Those in favor of abortion would do well to consider the devastating prospect that they might be wrong and are thus complicit in murder, or perhaps even guilty of it if they have had an abortion. Pro-lifers, meanwhile, could stand to realize the immense emotional walls that go up on the other side when they constantly use murder rhetoric or equate abortion to genocide.

As a quick footnote, however, it’s worth pointing out that the film’s only flat, stereotyped characters are the deadbeat young white male (the guy who got Sage pregnant, who refuses to help her) and the fire-and-brimstone anti-abortion protestors – two demons of the left if there ever were some.

The most poignant and, in my belief, significant point of the film comes when Elle tracks down Karl (Sam Elliot), an old flame who she had a relationship with before coming out as a lesbian, to borrow money for Sage’s abortion. At first she lies and says she needs the money for rent, but we do not know why she lied until he calls her out on it: “You’re a terrible liar.”

(MINOR SPOILER) “We need it to terminate a pregnancy,” Elle admits. Karl’s demeanor suddenly changes. He looks horrified, gets choked up, and shakes his head no. He can’t do it because he himself (the man!) once suffered the loss of an abortion, due to none other than Elle herself.

Shot in 19 days on a budget of $600,000, Grandma is an indie film. As such the script and plot do not come together in a nice, tight story. But that’s okay. Like American Hustle, or to a much lesser extent Pulp Fiction, it thrives at the scene level, most of which end in a comical shouting match of profanity and academic- and feminist-themed insults. After a while this started to wear on me. I began to find Tomlin’s hard-edged grandma grow despicable. Toward the end of the film it hit me: there’s hardly an ounce of love in this movie.

Well, maybe that’s not fair. Fractured relationships are indeed overcome. Elle, her daughter, and her granddaughter all come through for each other in the end. But if the bulk of their interactions with the menagerie of skeletons in their closets is anything to judge by, each has led a life of fundamental selfishness, not forbearance; of self-pity, not sacrificial service; of the pursuit of self-actualization, not redemption – the fruit of which is tragic dysfunction. 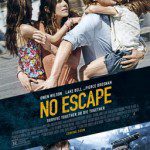 August 26, 2015
No Escape is the expat’s worst fears realized
Next Post

September 15, 2015 Wilson’s “Writers to Read” is a pretty solid guide
Recent Comments
0 | Leave a Comment
Browse Our Archives
get the latest from
Schaeffer's Ghost
Sign up for our newsletter
POPULAR AT PATHEOS Entertainment
1