Continuing to read through a volume of Augustine, I’ve come across a short version of the long (like, really long) argument he makes in the imposing City of God. If you don’t want to read 1200 pages of Augustine’s philosophy, read the couple of paragraphs below:

The city which has given us birth according to the flesh still abideth, God be thanked. O that it may receive a spiritual birth, and together with us pass over unto eternity! If the city which has given us birth according to the flesh abide not, yet that which has given us birth according to the Spirit abides for ever. “The Lord doth build up Jerusalem.” Has He by sleeping brought His building to ruin, or by not keeping it, let the enemy into it? “Except the Lord keep the city, he that keepeth it waketh but in vain.” And what “city”? “He that keepeth Israel shall neither slumber nor sleep.” What is Israel, but the seed of Abraham? What the seed of Abraham, but Christ? “And to thy seed,” he says, “which is Christ.” And to us what says he? “But ye are Christ’s, therefore Abraham’s seed, heirs according to the promise.” “In thy seed,” saith He, “shall all nations be blessed.” The holy city, the faithful city, the city on earth a sojourner, hath its foundation in heaven. O faithful one, do not corrupt thy hope, do not lose thy charity, “gird up thy loins,” light, and hold out thy lamps before thee; “wait for the Lord, when He will return from the wedding.” Why art thou alarmed, because the kingdoms of the earth are perishing? Therefore hath a heavenly kingdom been promised thee, that thou mightest not perish with the kingdoms of the earth. For it was foretold, foretold distinctly, that they should perish. For we cannot deny that it was foretold. Thy Lord for whom thou art waiting, hath told thee, “Nation shall rise up against nation, and kingdom against kingdom.” The kingdoms of the earth have their changes; He will come of whom it is said, “and of His kingdom there shall be no end.”

10. They who have promised this to earthly kingdoms have not been guided by truth, but have lied through flattery. (Sermon LV.9-10)

In other words, don’t tie your hearts too tightly to this world, because it is sinful and fleeting. We of course ought to pray for its conversion, but promises that it will be converted are never made and any who offer such promises are lying.

July 5, 2019
Augustine on the reading of Scripture
Next Post 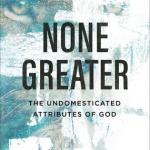 July 19, 2019 Some are greater than "None Greater," but not many
Recent Comments
0 | Leave a Comment
Browse Our Archives
Follow Us!