A couple of weeks ago, this blog covered Sheri Tepper’s sci-fi classic Grass. The subject of today’s review, Raising the Stones, is not exactly a sequel but rather is another tale set in the same universe albeit hundreds of years in the future after the events of Grass. You can read it as a stand-alone work, but if you’ve read Grass first you’ll recognize a few items of technology here and there (specifically the doors that allow instant travel between planets, introduced at the end of Grass). The main character of Grass likewise plays a bit role in the origin story of one of the religions featured in Raising the Stones. Otherwise Raising the Stones is a perfectly servicable story in its own right.

What we see unfolding across the novel is in one sense a fairly shallow and old-fashioned view of religion with a New-Agey twist. For example, the words of the prophetess (the main character from Grass) that found one of the main religions in the novel include tidbits like:

“”It is our minds and not any other attribute which gives us personhood and value. We share intelligence with other living things, and they are no less important then we. Even creatures without detectable intelligence have adapted themselves to play necessary roles. To make God in our image or we in God’s is blasphemy….
There is no sin inherent in any mind save the sin of pride in believing one has seen or been taught the absolute truth. The second greatest sin is refusing ot search for the truth one must acknowledge on will never absolutely find…
Even when people are well-meaning, do not let them fool with your heads.” (131-132)

Evil isn’t inherent in us, the only evil is not being true to ourselves. In part, this is because of the view of God. What some people want is a God of thunder and lightning and righteous fury. But the reality is that “God” is a quiet, unobtrusive force that speaks and influences quietly through a subtle closeness to nature:

The true God is not a God of dominance, but rather a God who coordinates and unites and harmonizes and creates, rather than one who oppresses and destroys.

The other God, the one pretty clearly referencing the future descendant of Islam, has a different origin and a different function:

“… the retributive religions… they all came from a pastoral background. In primitive times, everything out there in the dark was a predator. One had to guard against everything that threatened the flock, had to kill it if possible. At night, the flock had to be sequestered, put in the fold and guarded. The shepherd had to stand guard, sleepless, night after night… The shepherd had to be afraid of everything… Only the people survived who were very alert and perpetually firghtened, and thus very irritable and quick to attack.” (371-372)

Again, this is all the sort of thing people would have learned in a public university Intro to Religion class fifty years ago. And as far as that goes the responses of apologetics fifty years ago are fine places to go. For example, is there any justice in the God portrayed in this book? Individual nature and the physical body have both been kicked out, so why should any single person matter at all? And is there any atonement possible for sins committed in the past? Etc.

Fortunately, none of this takes away from the quality of the book. It’s still a great story well worth reading. 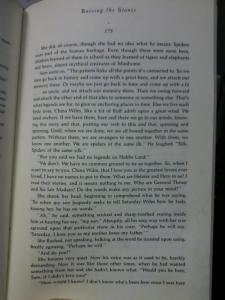 If you’re a book publisher, please never do this.

If you’re a book reader, you should pick up and enjoy Raising the Stones.