What should we think about the world?

What should we think about the world? April 2, 2021 Coyle Neal

We’re living in the midst of a renaissance of the Christian doctrine of creation. In part this is the result of (or at least concurrent with) the translation and publication of the works of Abraham Kuyper; in part this is a response to Evangelical emphasis on atonement and Christology for the past century; and in part this is a response to the collapse of cultural Christianity and the current political situation. (There may of course be other causes as well, these are just the ones that seem most obvious at this particular point in time.)  A major new contribution to this renaissance is Bruce Riley Ashford’s and Craig Bartholomew’s The Doctrine of Creation: A Constructive Kuyperian Approach.

In The Doctrine of Creation, we get a historical overview of how Christians have thought about creation beginning with the early church and working through modern approaches. This survey is wide-ranging (and yet still fairly brief, given the scope of time and theologians being covered) and settles on the argument that our “way forward” is to be found in the Dutch Reformed tradition–specifically in the thought of “Abraham Kuyper, Harman Bavinck, and their successors.” (99) (This is familiar territory for Bartholomew, whose earlier book traced The Contours of the Kuyperian Tradition, reviewed here.) This tradition carries with it several “broad contours” relative to the doctrine of creation:

Following the historical survey, the rest of this book is dedicated to expositing these contours. Beginning with a Trinitarian foundation–each person of the Trinity having a role in creation, the authors walk through the various parts of creation as laid out in Genesis. Heaven and earth; animals and plants; work and rest; fall and redemption all are explored in the light of God’s creating work. And while I don’t always agree with their conclusions (The Doctrine of Creation is much more in Niebuhr’s “Christ transforming” category, where I tend toward the “Christ in paradox” category), this book is an excellent introduction to a big topic that merits our extended attention and reflection. As Christians slip farther and farther away from mainstream Western culture, we need to be entrenching ourselves in a solidly Biblical worldview. A necessary part of that worldview is the doctrine of creation, which is why a book of the same title that is thoughtful, careful, and well-written is timely indeed. This is such a book.

*An unimportant concluding note. For all this book’s strengths, a major weakness is how jarring its format is (and of course this is not the fault of the authors). The structure of  The Doctrine of Creation takes some getting used to, though once you get it down it’s pretty straight forward. 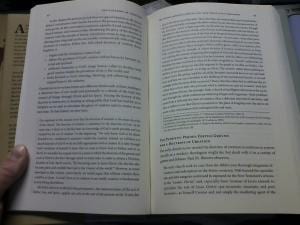 If you can’t tell from the picture, at occasional intervals through the book there are, well, ‘text boxes’, for lack of a better term (albeit only set off by a line and an indent on the left). These ‘boxes’ have their own footnotes and indented quotations, which gets confusing when they’re on the same page as new sections or other unrelated indented quotations. They are visually disruptive and arrest the flow of the narrative, even when they are interesting in their own right. That said, after a few chapters they are manageable. And frankly I don’t know what other approach could have been used. There are far too many of them to include as appendices or lengthy endnotes. And they do contain interesting sidebars from the main text. [Shrug] Do with that what you will.

April 6, 2021 Common Grace, 2.31
Recent Comments
0 | Leave a Comment
"I am aware of those kinds of discussions and statements (and even of the fact ..."
cneal Confronting the American Gospel
"No disagreement here!"
cneal Common Grace, 2.7
"No--Christians should be institutional because the church is an institution (it is more than that, ..."
cneal Christian Institutions in the 20th Century
"Good points! I love Will's columns too (he's especially been on fire for the last ..."
cneal George Will’s Mixed Sensibility
Browse Our Archives
get the latest from
Schaeffer's Ghost
Sign up for our newsletter
POPULAR AT PATHEOS Entertainment
1