By holding the doctrine of providence with the doctrine of the decree, we restore: “the steadfastness of the order, the progression of the ordination, and the governance of divine providence.” (444) This keeps us from false ideas about providence as merely divine intervention during emergencies and helps us enjoy the Transcendent God in the here-and-now.

We as human beings are unique in creation in that we have wills to shape ourselves towards life or death. This is no sham, but rather our wills are a part of God’s ordinance. This isn’t to say that our wills govern us internally while providence governs our external lives. Even our consciences recognize the unbreakable connection between inner and outer life, and where our whole lives fit in to the sin/misery:obedience/happiness order of reality. Nor are we defined by a combination of occasional inner decisions and external encounters with God. Such ignores God’s eternal character.

Our existence is fundamentally moral. This extends through this world and into eternity in hell and heaven, though we do not understand this moral life apart from sin. Someday we will know it fully, and then providence will exist no more in this sense. Obviously we don’t want to push this too far, since providence holds all things together. So there will always be some form of it. Kuyper uses the example of a horseman. One isn’t control of the horse only when spurs and reins are in use. Instead, even when it looks like the horse is moving as one with the rider because it is so well trained that the two appear to move as one:

“… the providential mastery of God over his entire world also shines in its full splendor when no shadow of resistance can be found, when at long last there no longer will be any need for ‘pulling on the reins.’ At that point, the highest level of freedom experienced by God’s children will be on display by the very fact that they progress to eternal glory in a perfected manner in the ‘harness’ of God’s ordinances.” (447-448)

That, however, is in the future. In this world we are still bound up with sin and so providence ties directly to common grace.

Both the Belgic Confession and the Heidelberg Catechism speak to this–the former from a Divine perspective and the latter from ours. So both imply the providence/common grace connection (especially the Heidelberg Catechism). The powers of darkness are always leashed by God, without whom we would immediately fall–just as even righteous Adam did.

So common grace begins with God’s rule over he devil, and “shrinks” or “grows” with the slackness or taughtness of the leash. 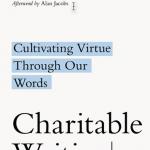 August 6, 2021 How not to be a jerk in your writing
Recent Comments
0 | Leave a Comment
"hmm interesting and informative information, and would like to add interesting information from myself. I ..."
Steve Andrews Violence and Sports in Netflix’s “Malice ..."
"Fair enough--though I do have to wonder at what point someone who believes in ongoing ..."
cneal Common Grace, 2.50
""... we're not deists and don't believe God has created and then left." Not all ..."
Deist1737 Common Grace, 2.50
"I am aware of those kinds of discussions and statements (and even of the fact ..."
cneal Confronting the American Gospel
Browse Our Archives
get the latest updates from
Schaeffer's Ghost
and the Patheos
Entertainment
Channel
POPULAR AT PATHEOS Entertainment
1