Two chapters in, and Kuyper has yet more to say about insurance. Kicking off this chapter, Kuyper makes a financial comparison with the Gospel. Our ‘accounts’ are both personal and corporate before God. Our personal account is settled at the final judgment. Today, there are three types of “personal settlement”

With those three things in mind: back to insurance. Our communal debt does not affect our personal account. What’s more, our communal account has levels: family, nation, the human race as a whole. There is guilt attached to each of these, and the guilt/punishment is often jumbled between them (both within the levels and between the levels).

To summarize all of this:

The Reformed have always held to the ideas of communal guilt and sin. The world opposes this and holds to Pelagianism or Arminianism–always at least to some form of individualism. Whichever form it takes, the world ultimately denies organic unity. This denial is ultimately an denial of the cross.

We must also not forget the connectedness of people in sin, guilt, and suffering. We all by nature forget this and fall back on individualism. Jesus teaches directly contrary to this. But! There are two kinds of suffering:

More on insurance ahead! 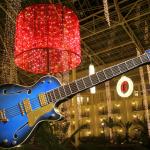 December 24, 2021
More Christmas (listening) in the Country
Next Post

December 31, 2021 Best Books of 2021
Recent Comments
0 | Leave a Comment
"hmm interesting and informative information, and would like to add interesting information from myself. I ..."
Steve Andrews Violence and Sports in Netflix’s “Malice ..."
"Fair enough--though I do have to wonder at what point someone who believes in ongoing ..."
cneal Common Grace, 2.50
""... we're not deists and don't believe God has created and then left." Not all ..."
Deist1737 Common Grace, 2.50
"I am aware of those kinds of discussions and statements (and even of the fact ..."
cneal Confronting the American Gospel
Browse Our Archives
get the latest updates from
Schaeffer's Ghost
and the Patheos
Entertainment
Channel
POPULAR AT PATHEOS Entertainment
1