If you were to imagine a book written in the early 1940s attempting to seriously explore Plato’s class divisions using newly discovered biological principles, but also wanting to avoid even remotely looking like the fascism going on in Europe at the same time, if you were to imagine all that you’d have Beyond this Horizon by Robert Heinlein.

Though not his best work, an okay-ish book by Heinlein is still going to be better than the best books by most science fiction writers. And even though it was written in the mid-20th century some of what I vaguely remember from high school biology holds up. At least in that there are genes and they do determine a lot of things and people think they can be tinkered with. Whether that’s a good thing of course is a question, but not one dealt with here. Heinlein’s characters just assume that we can and should dig around in the genome and move on with the (apparently more interesting) question of how that affects society.

In some ways, this look is more interesting than Heinlein’s later social exploration that explores social life. In collections like Revolt in 2100, Heinlein imagines a future ruled by a religious cult that has to be overthrown and replaced. In Beyond this Horizon, all that is in the past and utopia has been accomplished. Material plenty abounds and the only real question is what the most brilliant people in society will do with all the time on their hands. There’s no doubt they will work, but what work will they do? In Heinlein’s view, they will undertake a systematic and scientific exploration of the meaning of life and whether there’s a God/heaven/etc.

And that should show you the real weakness of this book. Heinlein skips around the Plato’s proto-fascism and instead focuses on the relationship between metaphysical questions and an affluent society. Which, you know, fair enough. The problem is he clearly is assuming a basic human goodness, which implies two things: 1) evil comes from genetic disorder (which does not get worked out in this book–again, he just assumes a lot and moves on); 2) evil primarily comes from a small group of mildly-competent malcontents bent on being in charge. As Christians of course we know that the problems of society are not tied to biology and not restricted to the few. Every one of us is a sinner in each part, and every one of us does wrong. Including that as a part of the world built in Beyond this Horizon would have been a different book to be sure, but it also would have given Heinlein more room to explore.

The short version: this is a fine enough book, but not the place to start with Heinlein. 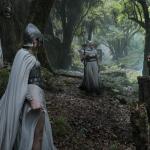