In spite of prophesies that he would stay mum, Tim Kaine’s bishop has responded to the senator’s weird and dissident mumblings that the Catholic Church would one day approve same-sex marriage.

More than a year after the U.S. Supreme Court’s ruling on marriage, and despite recent statements from the campaign trail, the Catholic Church’s 2000-year-old teaching to the truth about what constitutes marriage remains unchanged and resolute.

The Church has taught this for 2000 years, and it’s not going to change things just because Mr. Kaine says so. Who is he?

As Catholics, we believe, all humans warrant dignity and deserve love and respect, and unjust discrimination is always wrong. Our understanding of marriage, however, is a matter of justice and fidelity to our Creator’s original design. Marriage is the only institution uniting one man and one woman with each other and with any child who comes from their union. Redefining marriage furthers no one’s rights, least of all those of children, who should not purposely be deprived of the right to be nurtured and loved by a mother and a father.

We call on Catholics and all those concerned for preserving this sacred union to unite in prayer, to live and speak out with compassion and charity about the true nature of marriage – the heart of family life.

That is clear, brief, and no-nonsense. Some, undoubtedly, will want to kvetch that DiLorenzo does not mention Kaine by name. But he does indicate that his words were prompted by “recent statements from the campaign trail.” Whose else could they be? Kaine’s words had prompted myself, as well as others, to call upon the bishop to correct the senator.

If Kaine wishes to continue his support of same-sex marriage, let him do so, but let him do so as a dissident Catholic—not under the guise of a “devout” one. A devout Catholic does not publicly defy the teaching of the Church. End stop. 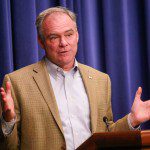 September 11, 2016
It Is Time for "Devout Catholic" Tim Kaine to Be Publicly Corrected
Next Post 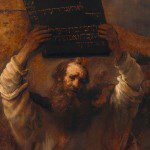 September 15, 2016 Marriage is Defined by God. To Accept Same-Sex Marriage is Heresy.
Browse Our Archives
Related posts from To Give a Defense

Not just another book
During my freshman year in college at a secular university, there was...
view all Catholic blogs
Copyright 2008-2021, Patheos. All rights reserved.
Close Ad