And by his bishop, Francis Xavier DiLorenzo. Here is the long and short of it. The Congregation for the Doctrine of the Faith published this document, called “Considerations Regarding Proposals to Give Legal Recognition to Unions Between Homosexual Persons.”

Section 10 has to do with the “positions of Catholic politians.” That’s the part that applies to Sen. Kaine. Let’s look at what the CDF says. (The bolding is my own.)

When legislation in favour of the recognition of homosexual unions is proposed for the first time in a legislative assembly, the Catholic law-maker has a moral duty to express his opposition clearly and publicly and to vote against it. To vote in favour of a law so harmful to the common good is gravely immoral.

[That’s mortal sin language, right there. It’s not something to take lightly.]

When legislation in favour of the recognition of homosexual unions is already in force, the Catholic politician must oppose it in the ways that are possible for him and make his opposition known; it is his duty to witness to the truth.

Now, this verbiage—“ways that are possible for him”—does not mean that people like Sen. Kaine are free to fudge or dissent. Opposing same-sex marriage remains a “duty,” as we shall read.

If it is not possible to repeal such a law completely, the Catholic politician, recalling the indications contained in the Encyclical Letter Evangelium Vitae, “could licitly support proposals aimed at limiting the harm done by such a law and at lessening its negative consequences at the level of general opinion and public morality”, on condition that his “absolute personal opposition” to such laws was clear and well known and that the danger of scandal was avoided.

So none of this “I personally support” and “the Church will some day change its position to agree with me” garbage. The CDF does not give Sen. Kaine that liberty.

This does not mean that a more restrictive law in this area could be considered just or even acceptable; rather, it is a question of the legitimate and dutiful attempt to obtain at least the partial repeal of an unjust law when its total abrogation is not possible at the moment.

Reapeal must be “not possible.” And “not possible” would mean something like there are not enough votes in Congress. It does not mean “the voters won’t like me” or “the party bosses will have my head on a platter.” None of that.

Catholics have a duty to oppose same-sex unions. Catholic politicians have a duty to do so “in a particular way.” It is their moral duty. To shirk this duty is “gravely immoral.” To do otherwise is to cause scandal.

And yet Sen. Kaine, in remarks at the annual gala of the Human Rights campaign—McClatchy reports on it—said he believes the Church may eventually change its position on same-sex marriage.

“I think it’s going to change,” Kaine says, “because my church also teaches me about a creator who, in the first chapter of Genesis, surveyed the entire world, including mankind, and said, ‘It is very good.'”

So? What does that mean?

I’m sorry, Sen. Kaine, but you are causing confusion and scandal. Yes, God said, “It is very good,” but have you not heard that in the beginning he created them male and female? The goodness of the design of creation was that marriage was designed for opposites, for male and female, in a complementary relationship. That is what was “very good.”

“Who am I,” Kaine continued—as though is more supremely wise and humble than the Church—“to challenge God for the beautiful diversity of the human family? I think we’re supposed to celebrate it, not challenge it?”

No, Sen. Kaine, it is by positing that there can be such a thing as same-sex marriage in the first place that you are “challenging God.” Jesus, speaking about marriage, Sen. Kaine, began with these words: “In the beginning he made them male and female.”

Sen. Kaine goes on in the interview to describe, not how he intends to live up to what the Catholic Church tells him is his duty as a Catholic, and his particular duty as a Catholic politician, but to describe how he changed his position and now thinks that same-sex marriage is a beautiful thing.

And this is the person AP reporter Kathleen Ronayne describes as a “devout Catholic.”

Sorry to be the one to inform Ms. Ronayne of this, but no. Sen. Kaine is a dissident Catholic.

If Sen. Kaine were a “devout Catholic,” he would know (and he would also accept) that no one in the Church, not even the pope, has any authority to change its teaching on same-sex marriage. The Church does not just make up what it teaches, Sen. Kaine. It teaches what has been revealed by God, and the content of divine revelation does not change. It is what it is—“inalienable,” as the CDF puts it.

Ontology 101, Sen. Kaine. God designed marriage for the union of the spouses and for the procreation of children. He did not design male to fit with male, nor female with female.

Who is Sen. Kaine to question the design of God? Who is the Church?

But when politicians profess to be “devout Catholics” and speculate that Church teaching—the word of God, in fact—can be changed on such points, they cause confusion and scandal.

And when a politician causes confusion and scandal, he needs to be publicly corrected by his bishop.

Bishop DiLorenzo, we are waiting.

Update: An earlier version of this article misprinted Bishop DiLorenzo’s name as Bishop DeLorenza. In addition, I incorrectly identified Sen. Kaine’s remarks as coming in an interview, rather than at a public address. I have made the necessary corrections. Thank you to the two readers who alerted me to these errors. 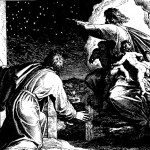 September 9, 2016
Muslims are "Brothers and Sisters in the Faith of Abraham"
Next Post 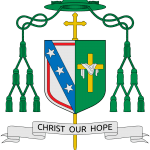 September 14, 2016 Bishop DiLorenzo Responds to Tim Kaine on Same-Sex Marriage
Browse Our Archives
Related posts from To Give a Defense