And it’s by Jon-Henry Westen again; wonders! Been there, done that. In this latest example of errant reportage, which you can read here, Life Site News proclaims: “Pope Says Schonborn Interpretation on Communion is the Final Word”! (That’s the title.)

Hmm. Don’t recall reading that. I looked at the pope’s interview; Zenit has the transcript here; can’t recall the pope saying anything that can fairly be summarized as deferring to Schonborn the “final word.” Nor was Schonborn’s presentation of Amoris Laetitia, quite exactly, an “interpretation” of any sort. It was, rather, a summary of the pope’s exhortation. You can find it here and take a look at it; I find it to be very profuse with direct quotations.

So we shall have to discern very carefully to figure out whether Westen has it right and I have it wrong.

Now, the context of all this is an exchange between Pope Francis and a reporter from the Wall Street Journal, which took place during the pope’s flight from Greece to Rome. The reporter, Francis Rocca, asked the pope whether, after the publication of Amoris Laetitia, there are “new concrete possibilities” for Catholics in an irregular marriage to have “access to the sacraments.” (Mr. Rocca does not specify which sacraments; there are, you may recall, seven of them.) The pope responded this way, in the translation provided by Zenit:

I could say “yes,” and that’s it, but it would be too small an answer. I recommend to you all that you read the presentation made by Cardinal Shoenborn [sic], who is a great theologian. He is a member of the Congregation for the Doctrine of the Faith and knows well the Doctrine of the Church. Your question will have an answer in that presentation.

Life Site News uses a different translation, but the substance of the pope’s response is the same. Funny thing is, I do not see, in that response, where the pope says that Cardinal Schonborn’s interpretation is the final word. Do you see it? I don’t see it. Where is it? The pope says Schonborn’s presentation “will have an answer” for the reporter’s question; it says nothing about Schonborn having “the final word” on the discipline of the sacraments.

More concerning to me is the following passage from Mr. Westen’s article:

Schonborn’s presentation boiled down Pope Francis’ more than 60,000 words in the exhortation to 3000, but in that short space made sure to include the “smoking footnote” being seen as [Oh, so this is just an interpretation? And whose?—there’s a passive voice construction going on here. Is this a general consensus, or the fears of a few cranks?] the opening of the door to Holy Communion to Catholics living in second unions where annulment from the first union was not possible. The position contradicts Pope St. John Paul II’s Familiaris Consortio as well as the Catechism of the Catholic Church.

Naturally this poses the question: what does the Pope say in relation to access to the sacraments for people who live in “irregular” situations? Pope Benedict had already said that “easy recipes” do not exist (AL 298, note 333). Pope Francis reiterates the need to discern carefully the situation, in keeping with St. John Paul II’s Familiaris consortio (84) (AL 298).

Wait, now. Mr. Westen tells us that Schonborn’s presentation “contradicts Pope St. John Paul II’s Familiaris Consortio,” then immediately quotes Schonborn as saying that discernment of situations must be “in keeping with St. John Paul II’s Familiaris consortio”? How does this work, exactly? Did an editor not catch this? Did someone not sidle up to Mr. Westen and say, “You know, sir, there seems to be a conflict here”? What is going on at Life Site News? (Don’t answer that.)

If Cardinal Schonborn meant to “contradict” Familiaris Consortio, it seems a funny way to do it, for him to go out and say, “Hey, discern situations, but remain faithful to St. John Paul II, you know.”

Mr. Westen goes on to quote Familiaris Consortio—you know, the document that Cardinal Schonborn just told us that pastoral practice must be “in keeping with”:

[T]he Church reaffirms her practice, which is based upon Sacred Scripture, of not admitting to Eucharistic Communion divorced persons who have remarried.

And Cardinal Schonborn says, “Stay in keeping with this”; and that, according to Mr. Westen, adds up to to “contradiction” and a license for profaning the body and blood of Christ. I am at a loss, I do confess.

I would only suggest that, if Cardinal Schonborn says, “Remain in keeping with Familiaris,” and Familiaris says that those in irregular unions (barring a commitment to continence) are not to be admitted to Communion, then perhaps the idea that Amoris Laetitia permits Communion for such individuals needs to be re-examined. 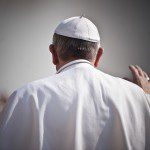 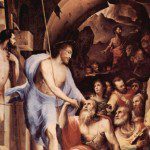 April 21, 2016 Some Further Responses to Limbo Apologists
Recent Comments
0 | Leave a Comment
Browse Our Archives
get the latest from
Catholic
Sign up for our newsletter
POPULAR AT PATHEOS Catholic
1