Kristen Hatten was, once upon a time, the Vice President of New Wave Feminists and much involved with Live Action. She also has a blog called Chronicles of Radness. These days, by her own telling, she has “come to identify with the alt right” and calls herself an “ethnonationalist.” [Edited to add: It is because of this that NWF, not approving of Hatten’s transformation, kicked her out several months ago.] Somehow, this is not “white nationalism,” it’s not racism, and she’s “100% prolife.” She’s the tippy-top of pro-life. Nor is she a eugenicist, either; so she says. She writes about it on Facebook, in a public post, here.

Let us, then, go and look at her Twitter feed, where she has 2500 followers; and let us see what she finds worth tweeting and re-tweeting. Shall we? 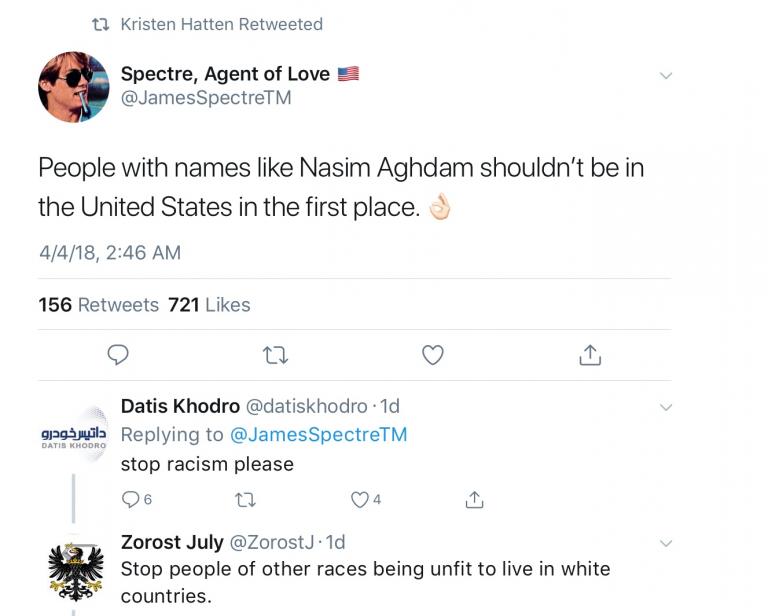 Hmm. But she’s not a “racist.” Just because she thinks people with Muslim names should stay out, that makes her racist? Please. I got nothing better than that? Now, the word “racism” doesn’t “scare” her, according to her Facebook apologia pro vita sua; it’s nothing more than “rhetorical warfare; it is “grossly overused as a weapon.” So the above re-tweet: not racism. Of course not. Don’t be silly.

So let us take a look at some other Totally Not Racist material from her Twitter feed. Shall we? 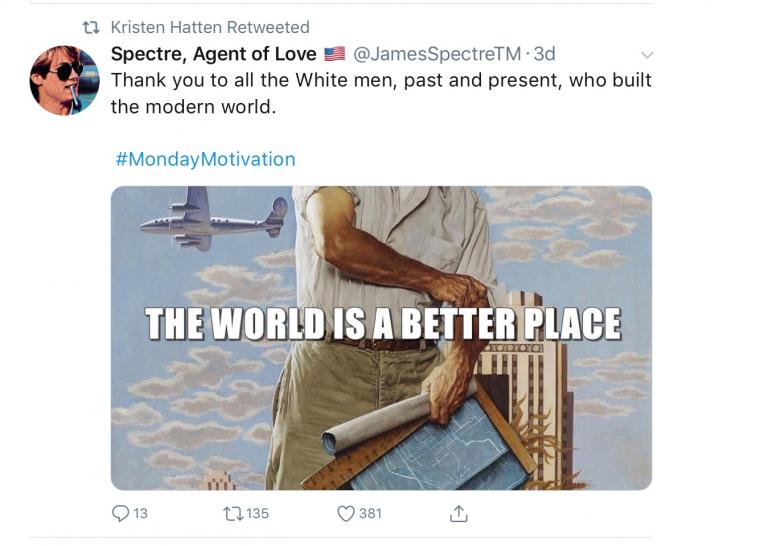 Hmm. So let me see if I understand. She’s wrought up in a dither because “our people” are being “replaced.” Mexicans, en masse, have “zero right” to come to the United States. She longs for people who are “like us.” “White men” built the modern world. But none of this is racism. The word is meaningless. It’s just rhetorical warfare. I see.

And for someone who insists she does not believe in eugenics, and is totally tippy-top pro-life, she sure retweets Richard Spencer a lot. (Richard Spencer, in case you don’t know, is a white supremacist who believes abortion is good because it has the ability to reduce black and Hispanic populations, thus benefitting good upstanding white folk.)

Of course, none of this is racist; and sure as heck, none of this suggests tippy-top pro-lifer Kristen Hatten supports racial eugenics.

But now we can travel over to her Facebook page and find more items to bolster her pro-life witness. There I read: “If Trump wants to win me back he can start by granting asylum to white South Africans.”

White South Africans are oppressed and need asylum? This is news to me. Forget whether it’s racist—it’s Kristen Hatten, dear reader, a self-avowed alt-right ethnonationalist; so of course it can’t be racism. But since when are whites in South Africa oppressed? Unless you think all white people everywhere are oppressed; but a totally not racist tippy-top pro-lifer like Kristen Hatten could hardly think that. So I’m somewhat mystified.

There’s hope, though. According to today’s apologia pro vita sua, Ms. Hatten is going to regale us all with a “blog post” and some “videos” detailing her “journey to the far right.” There, we can all hear her further explanation of how ethnonationalism is not racism.

“I am not a white nationalist,” she says. “I am an ethnonationalist.” And “it’s okay to be white.” Ah.

April 4, 2018
Yes, Virginia, The Catechism is a Magisterial Document
Next Post