Today (March 7) is the birthday of Alfred Edersheim, the nineteenth-century Bible scholar who really made the grand tour: He was born in Austria, converted from Judaism to evangelical Christianity in Hungary, studied theology in Edinburgh and Berlin, was a missionary to Jews in Romania and a preacher in Scotland. He was ordained in the Church of Scotland and then the Church of England, preached and lectured at Oxford, and died in France.

Edersheim’s greatest works are The Temple: Its Ministry and Service, and The Life and Times of Jesus the Messiah. These are sprawling, leisurely, learned works in which Edersheim’s delight in being a Jewish believer in Jesus are evident throughout. These are big books, but they represent a deeply conservative response to the lives of Jesus that flourished in liberal scholarship of the nineteenth century.

My favorite Edersheim book is (brace for a Victorian devotional title) his Golden Diary of Heart Converse with Jesus in the Book of Psalms. It only covers a select few Psalms, but Edersheim’s messianic reading of them is profound.

An oddity in the Edersheim bibliography is the posthumously published Tohu Va Vohu. What is a Tohu Va Vohu? It’s a phrase from the opening verses of Genesis, translated “without form, and void,” an appropriate title for this grab-bag of Edersheim quotations. Here are a few selections:

For a good many religious statements and preachers’ inferences there is no other Scripture reference than to Ephesians 12:95!

There are two facts which are never past: the Crucifixion and the Resurrection of Christ.

Israel’s first sin was in asking, their last in rejecting, a king.

With reverence be it said: Our modern theology has almost lost sight of the Father. Our thoughts and our prayers are almost exclusively directed to the Second Person of the Godhead. Yet it is to the Father we are to come through the Son and by the Holy Spirit; and it was the object of the Son to reveal the Father, through the Holy Spirit given unto us.

The chief use of apologetics is to answer a fool according to his folly; that is, to silence him.

There is no depth so deep but the everlasting Arms are underneath.

Spiritual life has its double beat of the heart: receiving all from God, and bringing all to God, as it is written: ‘All my springs are in Thee.’

The Korahite Psalms differ specially in this from the Asaphite, that the former treat chiefly of the Kingdom, the latter of the King.

For the German word Haltpunkt, the French have point d’appui. Does not this mark the intellectual difference between the two nations? What to the French is merely a point du’appui whence to make a spring, is to the German a Haltpunkt, or ‘Hold-fast-point.’

Most of our modern theology consists of casting the grand old Jehovahism into Western mould –substituting logic for worshipful intuition and intuitive worship. But, after all, those ideas belong to the Isles of the West, where the sun goes down, not where it rises.

…the inapplicableness of old sermons –I have read most of the Puritan diviens and Jonathan Edwards. In morals –see the slave question.

He is great who is great in small things and on small occasions.

Some people always oscillate between faith and unbelief, like the pendulum of a Dutch clock, and with the same loud and disagreeable tick.

Every man has his own idol, unless he has a God.

There is no ignorance so dangerous as experienced ignorance. 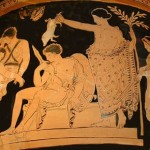 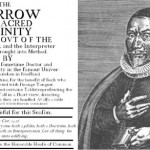 April 23, 2012 Learning from William Ames
Browse Our Archives
Related posts from The Scriptorium