The Difficulty of Ecumenism

Every Christian must be ecumenical. That is, every Christian must devote herself to the unity of Christ’s church–a unity that witnesses in the world to the love of the Father for the Son and to their love for those sealed by the Spirit of adoption. Ecumenism is part and parcel of the church’s mission, and it is no accident that the last century has seen an explosion in efforts toward the visible unity of the church and the fulfillment of the Great Commission.

The other thing that’s happened in the last century is Pentecostalism. Free churches, with their varieties of congregational polity, are here to stay. But funnily enough, they are often left out in the cold in ecumenical discussion. (Not always. Remember the example of Ralph del Colle, a Roman Catholic who paid attention to Pentecostals.) And yet, it’s precisely free churches–and most strikingly Pentecostals–whose very way of being church presents a fundamental challenge, if also a gift, to the ecumenical movement.

In the early days of the marvelous ecumenical experiment that is the Church of South India, Lesslie Newbigin put it this way: “[T]he whole difficulty arises from the fact that non-episcopal ministries have clearly been owned by our Lord and show the fruits of His presence.” (The Reunion of the Church, p. 159)

If Pentecostal churches have been owned by Jesus and show the fruits of his presence (and power!), who are we to say anything other than that, in the words of Ignatius of Antioch, “Where Jesus Christ is, there is the Catholic Church.” 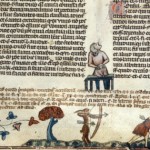 That's Not How Any Of This...
Preventing Grace
Related posts from The Scriptorium