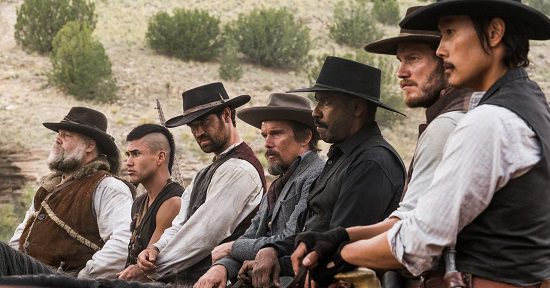 I have to admit, I went into this movie with low expectations.  The Seven Samurai, the Japanese action classic from Akira Kurosawa, is properly viewed as one of the great films of all time.  Its saga of a handful of men of privilege risking their lives to protect a peasant village from a gang of bandits is perfection in its pacing, characterization, and humanist moralizing.  Echoing what many have said before, it’s one of the rare films running over three hours that breezes by, with every minute essential to its tale.

The Seven Samurai’s 1960 retooling into a Western starring Yul Brenner and Steve McQueen was forgettable by comparison.  So another remake using the same title didn’t set my heart a-racing.

While this Magnificent Seven is still not worthy of the original (but, hey, not many films are), it’s an improvement on the 1960 version.  Instead of a septet of cowboys defending a bunch of white guys browned up to look Mexican, from a gang of bandidos led by Eli Wallach (!), we’re offered an ethnically diverse group of heroes defending a Western town from the predations of gold-mining robber baron.

Cramming a lot of plot into its two hours, this new Magnificent Seven hurries along the recruitment process of the seven fighters.  After sinister Bartholomew Bogue (a fittingly malevolent Peter Sarsgaard) gives the people of Rose Creek less than a month to vacate their homes, so he can expand his enterprise, a pair of desperate locals start scouring neighboring towns for saviors.

With far greater ease than the Japanese peasants of The Seven Samurai, the town’s representatives (a man and a woman this time, giving this film greater gender diversity as well) quickly find a willing leader in bounty hunter Sam Chisolm (Denzel Washington).  Played with appropriate gravitas by Washington, he forms the nucleus around which the other characters gather.

Similarly, the townspeople are mere sketches next to the individualized peasants of The Seven Samurai.  Only Emma Cullen, the female recruiter, makes an impression with her toughness and lust for vengeance.  Even worse, the seven fighters seem positively condescending and callous towards the townspeople, so the bonding across social classes that enriches Kurosawa’s film never happens here.

So those are some of The Magnificent Seven’s weak points.  Where does it succeed?  For starters, cinematographer Mauro Fiore has given the film a finely gritty look that hearkens back to the Westerns of 40-odd years ago.  His framing of the protagonists against the blue New Mexico sky gives them a near-mythical aspect.

Director Antoine Fuqua also propels his movie briskly along, so there’s none of the plodding filler that clutters so many contemporary action flicks.  Under Fuqua’s hand, the climactic showdown between the good guys and Bogue’s minions has a vivid immediacy, even if its aftermath is a tepid letdown.

The dialogue is more of a mixed bag.  Perhaps this is what comes from yoking together a pair of screenwriters, one who’s contributed to clunkers like The Expendables 2 and an award winner for masterworks like Season One of True Detective.  There’s too much script-by-numbers Western cliché (“What’d you have to touch your gun for?” seguing into an inevitable tough guy showdown), but there are other moments that have an authentic emotional resonance, as when Vincent D’Onofrio’s oddball tracker speaks of the worth of risking his life for others in the company of men he respects.

All of this nonetheless manages to come together into a fun piece of entertainment.  Even the conversion of Kurosawa’s samurai – renouncing rank and reward in a quasi-Marxist gesture of solidarity with the commoners – into a multiethnic gathering mostly works.  What could’ve been anemic political correctness becomes a symbol for our country’s potential.  The characters acknowledge their divisive past (Vasquez and Robicheaux’s grandfathers were on opposing sides at the Alamo; ditto Chisolm and Robicheaux themselves during the Civil War), but are willing to forge past it.

Fuqua’s transformation of Kurosawa’s nameless bandits into a robber baron seems equally timely.  Bogue’s embrace of rapacious capitalism mingled with a when-it-suits-him religiosity calls to mind Sam Walton, not to mention Donald Trump’s duping of American evangelicals.  Samuel Johnson’s famous epigram is due for updating:  patriotism – and piety – are the last refuge of the scoundrel.

(Parents’ guide:  The Magnificent Seven is rated PG-13, due to its violence and occasional strong language.  I suspect viewers 13 and older would enjoy this movie.) 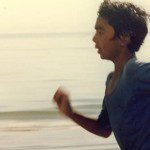 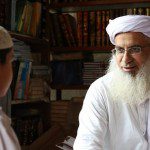 October 9, 2016 “Among the Believers” Is a Chilling, Up-Close View of Religious Extremism in Pakistan
Recent Comments
0 | Leave a Comment
"I don’t think that applies in this case. Public ownership and private ownership of the ..."
Carstonio “The Big Scary S Word”: Socialism ..."
"I think "socialism," like "democracy," can have different meanings, flavors, or degrees. The latter word ..."
Raging Bee “The Big Scary S Word”: Socialism ..."
"The "end" was Bundy's claim in that interview that his murderous career resulted from an ..."
wannabe “No Man of God”: An Audacious ..."
"I’m anti-label on many issues as a matter of principle. Most people’s positions on issues ..."
Carstonio “The Big Scary S Word”: Socialism ..."
Browse Our Archives
get the latest updates from
Secular Cinephile
and the Patheos
Nonreligious
Channel
POPULAR AT PATHEOS Nonreligious
1