Denial opens with Professor Deborah Lipstadt (as played by Rachel Weisz) asking her class at Emory University how you can know something is true.  Using her real-life legal battle against notorious Holocaust denier David Irving as its context, this film also provides a more broadly instructive example of the process of grasping and defending intellectual truth.

Denial unfolds over several years.  Although culminating in the 2000 courtroom showdown between Lipstadt and Irving, it effectively portrays the buildup of Lipstadt choosing her legal representatives and their diligent preparing for their appearance before the judge.

After Lipstadt’s 1993 book Denying the Holocaust castigates historian David Irving (Timothy Spall) for his flagrant lying about Nazi genocide, Irving elects to sue her for libel in his home country.  Irving may be a fabricator, but he’s no fool, savvily choosing Great Britain for this legal battle, where such cases begin with a presumption of guilt, as opposed to the American “innocent until proven guilty” stance.  In addition, Lipstadt and her legal team must prove not only that Irving is positing historical untruths, but that he is willfully, knowingly doing so.

The late Chicago film critic Gene Siskel used to say that his favorite films were those depicting people at their jobs, and Denial exemplifies that genre.  Early in the movie, we see Lipstadt assembling her team, starting with Anthony Julius (Andrew Scott, taking a break from being Sherlock’s Moriarty) and his researchers.  Up until Irving v Penguin Books and Lipstadt, Julius was best known for representing Lady Di in her divorce from Prince Charles, and Lipstadt fears that Julius may primarily be utilizing this case to further his notoriety.

Next, Lipstadt chooses Richard Rampton (Tom Wilkinson) as the lawyer who will actually present her case before the London judge.  Here again, Lipstadt has her doubts, as Rampton initially comes across as brusque and self-absorbed, not to mention a little too fond of the drink.

The defense team’s thoroughness compels them to page through all of Irving’s personal diaries.  Alas, Irving is an unpleasant chap whose sense of self-importance is so vast that his daily jottings fill multiple bookshelves.

Then, in one of Denial’s most powerful sequences, Lipstadt and Rampton make a winter visit to Auschwitz.  Director Mick Jackson handles these scenes brilliantly, slowing the pace and lowering the film’s noise level to a reverential hush, allowing viewers to soak in the gravity of the barbed wire fencing and the steps down to the nearly demolished gas chamber.

When it comes to the courtroom action, this is largely seen from Lipstadt’s point of view.  Jackson excels in underscoring not only the professor’s fear of losing the case but also her unease with the peculiarities of the British legal system.  Jackson communicates Lipstadt’s nervous hyperacuity by way of fast cutting and (in contrast to Auschwitz scenes) turning up the volume on the ticking clock and the movements of the courtroom attendants.  Doubtlessly, the director’s experience in conveying the sensory world of an autistic person in his superb biopic Temple Grandin aided him here as well.

Denial succeeds in giving us the strong personalities of each of this drama’s key players, thanks both to solid acting and an intelligent script.  Rachel Weisz in her best roles – The Constant Gardener and Agora, for instance – merges genius, risk-taking individualism, and a passion for justice.  Denial continues this trend, as her Deborah Lipstadt has academic chops plus a drive to see truth prevail, ensuring that the voices of murdered Jews and the survivors are not stifled.  Weisz’s portrayal of Lipstadt shows her struggle to submerge her idealization of herself as a lone heroine, in deference to a legal team that may know better tactics than her for winning their battle.  (And despite being a Brit, Weisz manages a plausible Queens accent, too.)

Tom Wilkinson rarely gets top billing, but he elevates just about every movie in which he has a supporting role (my favorite part for him is manic-depressive attorney Arthur Edens in Michael Clayton).  Here, he seizes the opportunity to play a man who gradually reveals emotional depth and vulnerability, once Lipstadt gets beyond his initial aloofness.

Timothy Spall, despite his thespian skill in the title role of the highly acclaimed Mr. Turner, will be forever most famous for playing Peter Pettigrew in the Harry Potter movies.  This time around, he’s lucky to own the part of a villain of greater substance.  His David Irving exhibits all the markings of a brittle narcissist.  Self-taught and desperate for acceptance, he is risibly but utterly serious in grouping himself with historians like Edward Gibbon and Thucydides.  Denial courageously leaves it an open question whether Irving believes in the flawed wares that he’s hawking.

The script of this film also makes it clear that its ideas and way of thinking apply not only to Holocaust denial, but to other issues facing our world.  Denial helps debunk the myth of false equivalency, persuasively demonstrating that not all intellectual positions (whether on the Holocaust, global warming, or white privilege) are equally meritorious.  Plus, bad ideas need to be revealed as such.  As Deborah Lipstadt so eloquently states in this film, freedom of speech does not mean the liberty to lie without accountability.

(Parents’ guide:  Denial is rated PG-13 for “thematic material and brief strong language.”  This would be excellent viewing for inquisitive teens 15 and older.) 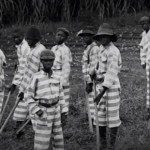 October 23, 2016
Available Now for Home Viewing, “13th” Is a Painful but Necessary Look at the History of Black Dehumanization in America
Next Post 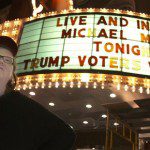 November 13, 2016 “Michael Moore in TrumpLand” Gives Us an Empathic Look Into the Mind of the Trump Voter
Recent Comments
0 | Leave a Comment
"I don’t think that applies in this case. Public ownership and private ownership of the ..."
Carstonio “The Big Scary S Word”: Socialism ..."
"I think "socialism," like "democracy," can have different meanings, flavors, or degrees. The latter word ..."
Raging Bee “The Big Scary S Word”: Socialism ..."
"The "end" was Bundy's claim in that interview that his murderous career resulted from an ..."
wannabe “No Man of God”: An Audacious ..."
"I’m anti-label on many issues as a matter of principle. Most people’s positions on issues ..."
Carstonio “The Big Scary S Word”: Socialism ..."
Browse Our Archives
get the latest updates from
Secular Cinephile
and the Patheos
Nonreligious
Channel
POPULAR AT PATHEOS Nonreligious
1