I Wasn’t “Ready” for the Disappointment of Spielberg’s “Player One” April 1, 2018 Andrew Spitznas

The once-great entertainer isn’t great at it anymore.

Steven Spielberg, the man who created the summer blockbuster phenomenon with Jaws, who gifted us with E.T. and Raiders of the Lost Ark, seems to have lost the entertainer’s touch.  These days, when he turns his brilliant mind to lighter works, we get ruiners of childhood touchstones like The Adventures of Tintin and Indiana Jones and the Nuked Fridge.  And now, Ready Player One.

It pains me to write those words, because I think Spielberg is a great filmmaker.  The aforementioned films of the ‘70s and ‘80s are deservedly labeled classics.  His A.I.: Artificial Intelligence would probably make my personal Top 25.  Schindler’s List, Lincoln, and 2017’s The Post all show that he remains capable of directing high-quality movies with gravitas.

I’m doubly pained, because the source material is a favorite novel of my entire family.  Ernest Cline’s sci-fi tale is a wonderful homage to 1980s-era adolescent geekdom, a funny and immersive quest story with root-your-heart-out protagonists, and an inventive dystopic vision of our near future.  (And its audio version, read gleefully by Wil Wheaton, is a not-to-be-missed listening experience.)

So, what happened?  The movie starts promisingly enough, with our 18 year old hero Wade Watts at home in the “stacks” of Columbus, Ohio.  The stacks are the housing projects of 2045, run-to-ground RVs and trailers precariously piled high atop each other.

Through a clever scene of Wade descending from his home to ground level, we peer into the windows of his neighbors and see a future where everyone is distracted from grim reality by their VR visors.  These visors allow access to the Oasis, whose sci-fi and fantasy planets offer escape, where doughy parents can be pole dancers, and anyone can race a Tron cycle or Back to the Future DeLorean.

By a similarly brisk and effective exposition, we learn that one of the co-inventors of the Oasis, James Halliday, died five years ago.  In his video last will and testament, he unveiled a contest for owner’s rights to the Oasis and his half-trillion dollar fortune.  The contest is set in the Oasis, where the winner must find the keys to three gates, the final gate opening to reveal a prize Easter Egg.

Five years later, even the first key is still unfound, with merely a few diehard Easter Egg hunters, or “gunters,” still searching.  Wade and his best friend H, whom he only knows in the virtual world as a musclebound, bass-voiced arena fighter, are two of them.  Devoted solo fighters (along with three other top competitors Art3mis, Shoto, and Daito), they are foes of evil megacorporation IOI, which seeks to win the contest and make the commercial-free Oasis an advertising cash cow.  Led by the pathetic yet sinister Noel Sorrento, IOI has a bottomless coffer and countless employees at its disposal.

Spielberg’s world creation in Ready Player One is adequate at best.  He smartly gives the real world scenes an ‘80s film stock grittiness, while the Oasis happenings have a slicker digital feel.  Beyond that, the stacks and the 2040s overall lack the gray, deadly, deadening dysphoria that they possess in the book.  And his depiction of the Oasis fails to persuade as the addictive experience it’s meant to be.

The plot, from the screenplay co-written by Cline and Zak Penn, has been drastically contorted from the original novel.  The result is formulaic and dissatisfying.  Cline’s presence as a writer here makes these changes inexcusable.  Penn, on the other hand, is kept busiest these days by the Marvel movie overlords, which likely explains the roteness of Ready Player One.  The phoned-in brassy bombast of Alan Silvestri’s musical accompaniment doesn’t help matters either.

Just as unforgiveable are the story’s implausibilities.  The first key is so lamely hidden that it would’ve been found in the first week by millions of experienced gamers.  Moreover, the movie grants IOI the technical chops to track down a particular face tattoo on the streets of Columbus, yet one of the good guys can walk in and out of Sorrento’s executive office like it’s Dunkin’ Donuts.

Meanwhile, in 2045, all roads no longer lead to Rome.  The movie loses the international flavor of the book’s adventures, where Shoto and Daito are from – surprise, surprise – Japan.  Instead, all of the top independent gamers, as well as IOI’s headquarters, are conveniently located in Columbus, Ohio.

Even the immersion in 1980s nerdism feels tacked on rather than integral.  Readers of the book will recall that Oasis technology enables its users to “act” in their favorite movies.  For James Halliday and the gunters, this involved re-enacting a couple of seminal films from this era.  I won’t blurt out spoilers for those who haven’t read Cline’s book, but will only say that his selections would be agreed upon by those who grew up in that time.

Despite manifestly having the licensure for some apt possibilities, the movie bafflingly chooses a Stanley Kubrick film for a walkthrough scene, a choice that no ‘80s geek that I know would’ve made.  I can only comprehend this as an homage to a director that Spielberg loved, but the end result is self-indulgent.

In the film, the best relics from this time are relegated to mere cameo status.  And they’re poorly used at that:  hell, when a character lobs a Holy Hand Grenade, he obviously should count “one, two, five!” before tossing it!

I could go on, but I’ll close my commentary with Ready Player One’s acting.  Tye Sheridan is decent enough as Wade, and Olivia Cooke conveys Art3mis’ depth and winsome resourcefulness, even if she doesn’t have the same substantive material to work with as she did in Me and Earl and the Dying Girl.

Conversely, Lena Waithe, so good as Aziz Ansari’s lifelong pal in Master of None, seems miscast as H, devoid of chemistry with her fellow gunters.  Mark Rylance, meant to reside somewhere on the autism/Asperger’s spectrum as Halliday, comes across instead as depressive – hardly an inspiring model for non-neurotypical youngsters who find their way to this film intended as light entertainment.

So, how do we account for such a misstep by a great moviemaker?  Maybe Spielberg has matured past the capacity to direct successful action films.  With few exceptions – like Black Panther and Mad Max: Fury Road – my predilections have moved past this genre, and I’m two decades younger than Spielberg.

Or perhaps it’s just that movie moguls are mortal, too, and they’re as lousy at multitasking as the rest of us.  Prepping two films for release within three months of each other – not to mention the dozen-plus projects he’s attached to as producer – might be too much.  Mr. Spielberg would probably do well to heed the words of another great American, obeying Thoreau’s dictum to simplify, simplify. 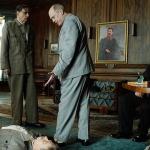 March 25, 2018
“The Death of Stalin”: Pitch-Black Political Humor at Its Finest
Next Post 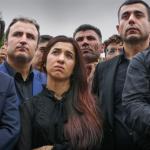 April 6, 2018 Full Frame Documentary Festival, Dispatch #1: Yazidi Genocide, Extreme Domestic Violence, and RBG
Recent Comments
0 | Leave a Comment
"I don’t think that applies in this case. Public ownership and private ownership of the ..."
Carstonio “The Big Scary S Word”: Socialism ..."
"I think "socialism," like "democracy," can have different meanings, flavors, or degrees. The latter word ..."
Raging Bee “The Big Scary S Word”: Socialism ..."
"The "end" was Bundy's claim in that interview that his murderous career resulted from an ..."
wannabe “No Man of God”: An Audacious ..."
"I’m anti-label on many issues as a matter of principle. Most people’s positions on issues ..."
Carstonio “The Big Scary S Word”: Socialism ..."
Browse Our Archives
get the latest from
Nonreligious
Sign up for our newsletter
POPULAR AT PATHEOS Nonreligious
1