Bo Burnham Captures the Horror and Triumph of “Eighth Grade”

Quick show of hands: who wants to relive eighth grade?

Not surprisingly, I see no volunteers.  Despite western culture’s immature infatuation with youth, this never proceeds as far as wanting to re-experience the strangeness and insecurity of the early teen years.

Eighth Grade, the debut feature from writer/director Bo Burnham, does an excellent job of depicting the grimness and sporadic hope of this life stage.  I admire how he believably portrays what feel timeless about early American adolescence:  mean girls, uber-hormonal boys, and awkward self-doubt.  But drawing from his own beginnings as a comic on YouTube, Burnham also captures what is unique about being 14 in the 2010s, namely the pernicious ubiquity of cellphones and social media.

Eighth Grade’s protagonist, Kayla Day, is herself an aspiring YouTuber.  The film opens with her creating one of her seldom-viewed self-help videos, on the topic of “being yourself.”  Her speech peppered with “um” and “like,” Kayla exudes an overpowering wave of unease that undercuts the motivational content of her words.

We follow Kayla through the final week of eighth grade, which Burnham intelligently splices with voiceovers from her other videos.  Sometimes this is done in a spirit of irony, as when her hunched posture and shyness belie her exhortations on “how to be confident.”  At other times, Kayla is trying to practice what she preaches, when her video on “putting yourself out there” overlaps with her reluctant attendance of a mean girl’s birthday party.

I appreciate the mundanity of the events and characters of Eighth Grade, the way it contains the small mortifications and incremental triumphs that populate this phase.  (For this reason, I’ll take Burnham’s film every time over the done-to-death quirkiness of movies like Lady Bird.)  Kayla gapes open-mouthed at Aiden, the classmate she’s infatuated with, so cool in her eyes that he gets his own theme music when he crosses her field of vision.  Cleverly, the camera tells another story, revealing Aiden as a jerk with more than his share of gross mannerisms.

Eating dinner with her single dad, Kayla bristles at the most benign questions, proclaiming she’d be happier if he only let her spend more time on her phone.  This again is given the lie by what we actually observe:  Burnham artfully superimposes the reflection of Kayla’s eyes onto the idealized, unattainable other on her screen.  Overall, Eighth Grade makes a persuasive case for the dysphoria-inducing qualities of social media.

Elsie Fisher pours herself into a marvelously vulnerable performance as Kayla, in her first major film role.  In numerous close-ups, we see conflicting emotions play across her face like the zits that appear and vanish during the course of the week.  Her emotions are immediately relatable and contagious:  we cringe miserably as she slouches through another subpar school day, or brighten as she beams when a sweet high school student takes her underwing.  (And as someone with social anxiety, I feel qualified to say that Fisher nails this with her posture and facial expressions, just as Burnham hits the bullseye with his script.)

Eighth Grade does fall short with its portrayal of the adults in the middle school milieu.  In my own experience of this time, and witnessing my three kids’ navigation of this phase, I have yet to encounter educators who try as desperately to be hip as the principal and teachers at Kayla’s school.

One of the major plot turns, too, will be completely predictable for anybody who’s watched more than two rom-coms.  This being said, there is plenty of heartfelt comedy in this film, as you’d expect in the brainchild of such a gifted stand-up comic.

Burnham additionally makes a freshman error of allowing his synth-heavy score to sometimes drown out onscreen events.  This mistake is particularly glaring in light of his technical savvy elsewhere, as the mixing of voiceover, social media screen views, following shots, and close-ups is expertly done.

On the plus side, one more thing I love about Eighth Grade is the father-daughter relationship depicted.  Veteran actor Josh Hamilton does a great job as Kayla’s dad, Mark, a single parent striving for the balance between expressing concern and giving his daughter the space every adolescent needs.

Burnham is also spot-on with his developmental insight, that a teen craves an affirming peer group, but their empathy and integrity emerge from healthy, affectionate parenting.  And despite her all-too-believable struggles, Kayla is lucky to have this in her life. 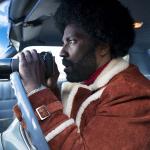 August 19, 2018
The Moral Urgency of Spike Lee’s “BlacKkKlansman”
Next Post 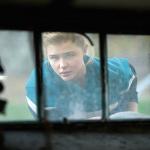 September 2, 2018 The Conversion Therapy of “Cameron Post”
Recent Comments
0 | Leave a Comment
"I don’t think that applies in this case. Public ownership and private ownership of the ..."
Carstonio “The Big Scary S Word”: Socialism ..."
"I think "socialism," like "democracy," can have different meanings, flavors, or degrees. The latter word ..."
Raging Bee “The Big Scary S Word”: Socialism ..."
"The "end" was Bundy's claim in that interview that his murderous career resulted from an ..."
wannabe “No Man of God”: An Audacious ..."
"I’m anti-label on many issues as a matter of principle. Most people’s positions on issues ..."
Carstonio “The Big Scary S Word”: Socialism ..."
Browse Our Archives
get the latest updates from
Secular Cinephile
and the Patheos
Nonreligious
Channel
POPULAR AT PATHEOS Nonreligious
1