Film adaptations of video game franchises rarely pan out. The ease of transition from comic book to screen is straightforward. In most cases, the comic book artists have already fine-tuned the graphic appeal and narrative arcs of their characters; the filmmakers are gifted years of storyboarding material and cultural currency the moment they sign on to a comic book adaptation. Video games, by the nature of their interactivity, are a more difficult source material for a studio to take on. Pokémon: Detective Pikachu breaks the long string of duds left in the wake of Hollywood’s thirst for another hit franchise to match the success of the Marvel Cinematic Universe.

By now, most will be generally familiar with the premise of Pokémon. The release of Pokémon Go, in the summer of 2016, brought the twenty-four-year-old video game franchise into the age of the smartphone. With the combination of its novel use of augmented reality and the undeniable charm of its monster designs, Pokémon Go hooked both children and grown-ups in the months leading up to the 2016 presidential election. There was a genuine sweetness to the sight of toddlers, millennials, and baby boomers wandering around public parks, catching imaginary creatures together. The success of the film’s opening at the box office is evidence of the lingering goodwill the culture feels toward the franchise.

Even for the initiated, the lore behind Detective Pikachu is dense. A fair amount of exposition is inevitable for the beginning of a film franchise which is adapted from such a long running series, and writers Dan Hernandez and Benjie Samit do a passable job of upholding the canon of the Pokémon universe without miring the plot in irrelevant details. Set in Ryme City, where pitting pokémon against each other in battle has been outlawed, the film focuses instead on the personal bonds that form between humans and their pokémon partners. A symbiotic relationship between humankind and pokémon is the very infrastructure of Ryme City itself. Some of the film’s best images are long shots of this cityscape, which is peppered with giant monsters directing traffic, brightly colored duck creatures waddling down sidewalks, and anthropomorphic turtles aiding firefighters.

The art design and cinematography truly shine. Shot on 35mm, the design of Ryme City does an impressive job incorporating the neon-soaked noir atmosphere of Blade Runner. The interaction between live actors and their CGI companions within this futuristic setting is a fantastic technical achievement. Hardcore fans will not be disappointed by the tactile recreations of the pokémon. Keeping the silhouettes of the original creature designs, the visual artists have set the high-water mark for fleshing out cartoon creatures in live action. The texture and corporeality applied to the monsters doesn’t diminish the uncanny cuteness that has driven their appeal since their pixelated two-dimensional origins on the Nintendo GameBoy’s two-inch screen. It is, perhaps, the strength of the film’s visual execution that makes the bizarre fluctuations in tone all the more glaring.

The plot revolves around one of my least favorite tropes in children’s media: an orphaned protagonist. I understand that disappearing a character’s parents is a tried and true method of creating pathos, but that doesn’t make it any less overbearing. The film never manages to deliver on its emotional stakes, in part because its humor is so consistently entertaining. I’ve never been a fan of Ryan Reynolds, but his turn here as the wise-cracking rodent-detective is as precise as it is charming. There are moments of pure camp in the over-the-top performances of Kathryn Newton, who plays an aspiring reporter, and Ken Watanabe, who brings a humorous gravity to his grizzled police chief with a heart-of-gold. Meanwhile, Justice Smith does an admirable job playing it straight against a backdrop of CGI monsters and character actors as the film’s orphaned protagonist. The tinge of bitterness he adds to Tim Goodman’s relationship with his absent father is a welcomed addition to the film’s familiar plot points.

My experience watching this film was, I imagine, familiar to many other audience members. I grew up with the franchise as a kid, and took my own pokémon-obsessed five-year-old with me to see this first live-action adaptation. The nostalgia-driven nature of contemporary media is becoming tedious, but I was looking forward to sharing this particular experience with my son. His enthusiasm has gotten me through mediocre movies before, and I was prepared to enjoy Detective Pikachu vicariously, if need be. I was pleasantly surprised by the film’s dry humor and film noir nods, but the narrative is peppered with unearned pathos which kept both me and my son from having the sort of experience which a film like My Neighbor Totoro provides. With its mix of magical realism and adorable creature design, there are certain resonances with Miyazaki’s work. Unfortunately, the melodramatic tendencies of Hollywood keep Detective Pikachu from reaching the childlike euphoria of studio Ghibli’s best films. 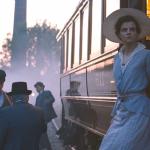 May 12, 2019
A Century-Old Hungarian “Sunset,” an Allegory for Our Times
Next Post 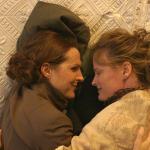 May 19, 2019 “Wild Nights with Emily” Dickinson: Comedy with Earnest Intent
Recent Comments
0 | Leave a Comment
Browse Our Archives
get the latest from
Nonreligious
Sign up for our newsletter
POPULAR AT PATHEOS Nonreligious
1

“First Moments in Heaven” — When...
Godzooks: The Faith in Facts Blog
Related posts from Secular Cinephile