“Da 5 Bloods”: War as Fatal Distraction from the Battle for Racial Equality

Spike Lee’s newest film, Da 5 Bloods, is an apt companion piece to his last feature, BlacKkKlansman.  His 2018 film used the incredible-but-true story of a black cop infiltrating the Klan to look at how the pernicious language of white supremacy has morphed over 150 years, culminating in our current “very fine people on both sides” President.

In a parallel process, his latest film broadens from a fictional story of four black veterans returning to Vietnam to retrieve the remains of their fallen squad leader, into a wider history of how America has used black soldiers as cannon fodder, always failing to deliver on the promise that faithful military service will result in better treatment domestically.

Our immoral war in Vietnam was an especially nasty example of this pattern, which Spike Lee and his editor Adam Gough skillfully illustrate from the get-go.  Da 5 Bloods opens with footage from an interview of Muhammed Ali explaining his refusal to serve in Vietnam, before quickly cutting to poignant images of 60s- and 70s-era cities burning, police and military brutality during peaceful demonstrations, and inner cities unfit for human habitation.  Like BlacKkKlansman, it doesn’t take Lee long to get to Trump (bitingly dubbed “President Fake Bone Spurs”) as emblematic of white boys who got deferments, while black men were disproportionately sent to the jungles of Southeast Asia.

Of the four veterans, Paul’s character is by far the most fleshed out and the most troubled.  We witness the flashbacks and heightened startle response of PTSD that all four of them suffer, but Paul is the one who most clearly never came home.  He was a distant father to David and now is quick to ratchet his anger to DEFCON 4 during their return to Vietnam.  (He’s also the lone supporter of Trump among the five of them, seeing no irony in a black man demonizing Mexicans.)

We don’t learn nearly as much about Melvin or Eddie, but Otis is the yang to Paul’s yin.  Unlike Paul, Otis sought help for his PTSD and succeeded as a family man.  Paul stirs things up, then Otis jumps in to defuse.

Lee and cinematographer Newton Thomas Sigel have lensed these present-day sequences in crisp digital.  For contrast, the flashbacks to our protagonists’ tours of duty are depicted with a narrower aspect ratio, using color-saturated film stock.  In these scenes of 1971 events, Lee also made the counterintuitive choice to show the squad leader Stormin’ Norman (a saintly Chadwick Boseman) at the age he died, while the other four soldiers are shown at their current ages.  This brilliantly communicates the vividness of combat flashbacks for those who suffer them:  their bodies have aged, but their memories haven’t.

Through these flashbacks, we discern the morality tale component of Da 5 Bloods.  The mission that killed Stormin’ Norman was a failed effort to transport gold to Montagnards who were fighting on the American side in the war.  Paul, Otis, Melvin, and Eddie are not only back in Nam to locate Norman’s remains, but hopefully to retrieve the precious metal.

Spike Lee cleverly references the Hollywood classic The Treasure of the Sierra Madre for this aspect of his film.  Like Bogart and his compadres in the 1948 film, the five present-day Bloods battle paranoia and greed in their quest.  Norman (described by the survivors as “our Malcolm, our Martin”) wanted his squad to use the money to lift up their people back home; this outcome is increasingly questionable in the second half of Da 5 Bloods.

Among its acting ensemble, there’s not a weak link, but this is a particularly strong showcase for the talents of Delroy Lindo.  For a man whose career predates the end of the Vietnam War, this may be his all-time best performance, which includes a pair of forceful into-the-camera monologues I won’t soon forget.  For a character who could’ve been a MAGA hat caricature, Lindo imbues him with a sympathetic complexity.  Having idealized Norman, Paul turned bitter nihilist after his death.  Feeling wronged by American society, he still doesn’t hesitate to utter racist epithets about his Asian hosts.  He’s pitiable for his prickly exterior and self-torment, a man who wants to both love his son and disown him.

Lee has also convincingly portrayed Vietnam past and present, with its street scenes in Ho Chi Minh City capturing the uneasy dialectic of flag-waving communism and skyscraper capitalism.  As usual, Thailand effectively stands in for the jungles and rice paddies of rural Vietnam.

In addition, Da 5 Bloods addresses the myriad ways in which the war never ended:  abandoned allies, countless dead, the millions of gallons of mutagenic defoliants dumped by our planes, the landmines.  And through a subplot involving Otis and his former Vietnamese lover, we bear witness fleetingly to the sufferings of Amerasian children, treated as subhuman for being offspring of the vanquished occupier.

In Lee’s hands, the Christian imagery and talk of “God is love; love is God,” which are so often facile in inferior scripts, don’t feel oppressive here.  This is helped, too, by a score that uses Marvin Gaye tunes rather than traditional Gospel music.

Whether among five black soldiers in Vietnam or in the present Black Lives Matter movement, Lee expresses hope that love can surmount hate.  Lee’s adroit touch on this theme is epitomized by his transformation of Paul’s “Make America Great Again” hat into lines from the similarly-titled poem by Langston Hughes, “Let America Be America Again.”  Unlike the hateful sloganeering by President Fake Bone Spurs, Hughes’ poem is an aspirational vision of an egalitarian nation:  “America never was America to me / And yet I swear this oath – America will be!” 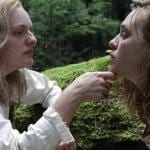 June 14, 2020 “Shirley”: Have an Aesthetically Splendid Time with Four Awful People
Recent Comments
0 | Leave a Comment
Browse Our Archives
get the latest updates from
Secular Cinephile
and the Patheos
Nonreligious
Channel
POPULAR AT PATHEOS Nonreligious
1