In a year filled with COVID-induced missed opportunities, including a pair of in-person film festivals, it’s at least satisfying to end my stay-at-home fest with a documentary by my favorite living director, Werner Herzog.  In my estimation, no one more skillfully and consistently combines beauty, strangeness, and philosophical insight.  It’s the rare Herzog film that doesn’t pique my own curiosity and sense of wonder.

In this Year of the Plague, Herzog has impressively released three new films onto streaming platforms.  Regrettably, this last one – Fireball: Visitors from Darker Worlds – is the weakest of the trio.

However, there’s still plenty to admire.  In a travel-starved time, it’s marvelous to journey around the world to breathtaking sites, courtesy of Herzog and co-director Clive Oppenheimer’s digital camerawork.  And in their 97 minute study of meteorites and their anthropological significance, I learned a boatload, and had fun doing it.

Fireball makes for Herzog and Oppenheimer’s third collaboration.  Their first was 2007’s Encounters at the End of the World, in which the Cambridge-based volcanologist was one of many scientists interviewed by Herzog during his voyage to Antarctica.  In 2016’s Into the Inferno, Oppenheimer did the onscreen interviewing while Herzog furnished voiceover.  This division of labor is unchanged for Fireball, though for the first time, Oppenheimer shares directing credit.

Compared to Into the Inferno, their latest work lacks a clear overarching thesis.  Their 2016 film concluded that humanity ascribes personal, spiritual meaning to volcanic activity, when in reality, volcanoes like the rest of the universe are monumentally indifferent to us.  Fireball might imply as much, but doesn’t say so outright, with a structure more meandering and less coherent.

Oppenheimer likewise seems less enthusiastic as a conversationalist, in comparison to their 2016 co-adventure.  Perhaps it’s because meteorites are not his area of expertise.  Maybe it’s because some of the interview subjects are splendid (a Norwegian pioneer in the study of micrometeorites, a couple of contagiously geeky professors in Rajasthan and Arizona), while some are blander (a pompous Vatican Observatory scientist, a disengaged Aboriginal artist in Australia).

In the same vein, Herzog’s voiceover is usually a major part of his films’ appeal.  A rare polymath, he can normally be counted on to offer unexpected yet rich insights.  Here, by contrast, his commentary is tame, at one point self-indulgent.

So, with these flaws, why the four-star rating?  Because this is nonetheless an informative, fascinating journey.  It’s stunning to be reminded that the force of the asteroid strike in the Yucatan 66 million years ago had the power of hundreds of millions of atom bombs.  Just as incredibly, we didn’t discover its massive impact crater until the 1970s.

It’s thrilling to learn about micrometeorites and gaze upon their beauty under a microscope.  (Did you know thousands of tons of such material land on our planet yearly?  I didn’t!)  Our growing understanding of meteorites is wonder-full:  the discovery of five-fold crystalline symmetry in some particles, heretofore unknown in nature; the presence of amino acids, lipids, and sugars in others.

Even if the human connection to meteorites is tenuous, it’s still enriching to scope out impact sites with Herzog and Oppenheimer’s camera crews.  Oppenheimer talks with an Indian geochemist in one such locale, four kilometers wide, with a millennium-old temple to Shiva in the background.  In the Yucatan Peninsula, we observe a haunting, elaborate Day of the Dead ceremony.  Nearby, we later visit one of the many sinkholes created by the asteroid’s collision, believed by the Mayas to be entryways to the underworld and full of their artifacts.

Richard Dawkins famously wrote in Unweaving the Rainbow that scientific knowledge doesn’t diminish the splendor of the universe but instead deepens our amazement.  The Vatican astronomer shares his same conclusion here.  On the strength of Fireball’s visuals and its knowledge imparted, I agree wholeheartedly with both men. 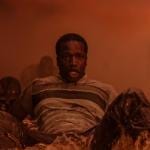 November 1, 2020 “His House”: A Solidly Built Addition to the Haunted House Genre
Recent Comments
0 | Leave a Comment
Browse Our Archives
get the latest updates from
Secular Cinephile
and the Patheos
Nonreligious
Channel
POPULAR AT PATHEOS Nonreligious
1