“Slalom” and the Slippery Slope of Abuse

“Slalom” and the Slippery Slope of Abuse April 9, 2021 Andrew Spitznas

Sadly, the abuse of power to molest youth isn’t unique to the Catholic priesthood.  The scandals at Penn State, Ohio State University (under the eye of Republican Representative Jim Jordan), and USA Gymnastics show that too many coaches and authority figures will assault their charges, given the opportunity.

Though French writer/director Charlène Favier is a little cagey about this in interviews, she has evidently turned her own such experience in youth sports into art for her first feature.  Slalom is a forcefully subjective immersion into the sensory world of a vulnerable 15-year-old skier.

As Slalom opens, Lyz (Noée Abita) is joining a small group of adolescent skiers under the exacting regimen of Coach Fred (Jérémie Renier) in the French Alps.  While her new friend Justine (Maïra Schmitt) has her modest sights on an eventual gig as ski instructor, Lyz is aiming for an Olympic berth.

During its first 30 minutes, Favier’s film illustrates how absentee parents, overly porous physical boundaries, and solo time with a lone adult are gateways to abuse.  Fred uses the same showers as the youngsters, and is alone with Lyz as she strips to her undies for physical measurements.  Lyz’s mom is away on a new job in Marseille, and the kids’ onsite schoolteacher makes herself scarcer and scarcer.

As Lyz’s skillset is far beyond her peers, she quickly becomes Fred’s favorite.  Her talent and drive also furnish a rationale for training sessions just involving the two of them.  Slalom effectively gives Lyz and Fred’s interactions an undercurrent of unease to start with – something a teen could easily minimize – before their relationship turns indisputably traumatic.

Both lead actors are up to the demands of their roles.  Abita’s responses feel plausibly adolescent, shifting as rapidly as the weather on the slopes.  One moment she’s reacting with horror and disbelief to an assault; soon after, she’s smugly exultant over her special status.

Belgian actor Jérémie Renier has long been a regular in the Dardenne Brothers’ profound morality tales, throwing himself completely into compromised, often unlikable roles.  Thus, the part of Coach Fred is right up his alley:  hardly a caricatured villain, but a zealous, sometimes verbally abusive coach who takes his unblocked entry into his charges’ lives unforgivably far.

For all of the camera’s intimacy – and the following shots of Lyz’s body double on the slopes are exhilarating – Slalom is too much about surfaces, not enough about psychology.  Besides knowing that Fred and Lyz are intensely competitive, and that Lyz is a typically curious adolescent when it comes to drugs and her libido, we learn little else about what makes them tick.  The film’s lean run time of 92 minutes doesn’t help deepen her characters, either.

More problematically, the scenes involving Lyz’s abuse by Fred, and others involving her peers’ sexual explorations, feel voyeuristic.  These sequences are graphic enough that I was relieved to learn that the actors playing the teens are all adults (if barely so).

In her defense, the director may be trying to score a polemical point here.  Under French law, Lyz is at the legal age of consent.  Favier’s camera shows inarguably that Lyz is still a child emotionally, lacking the adult capacity to consent to Fred’s advances.

(Slalom is now available for home viewing through arthouse cinema websites like this one.) 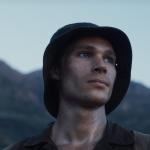 April 4, 2021
“Moffie”: The Price of Gayness in Apartheid-Era South Africa
Next Post

April 11, 2021 Coming-of-Age Story “Kuessipan” Stands Apart for Its Beauty and Unique Setting
Recent Comments
0 | Leave a Comment
Browse Our Archives
get the latest from
Secular Cinephile
Sign up for our newsletter
POPULAR AT PATHEOS Nonreligious
1