“The Green Knight”: The Hero with a Thousand Revisions

“The Green Knight”: The Hero with a Thousand Revisions August 1, 2021 Andrew Spitznas

Near the end of his quest to meet up with the Green Knight, a lord played by Joel Edgerton asks Gawain (Dev Patel) if once he completes this task, he’ll be changed forever.  Without hesitation, Gawain confidently answers yes.

This exchange epitomizes much of what I love in writer/director David Lowery’s The Green Knight.  Edgerton’s lord comes across as a hunting-obsessed lunkhead, so it’s ambiguous whether the irony we perceive in his question is intentional.  Patel’s Gawain is so naïve and shallow, there’s no doubt as to the sincerity of his reply.  Since his life till now has involved nothing but lingering at the periphery of King Arthur’s Round Table, in Patel’s nuanced portrayal, he needs his answer to be true.

At the same time this exchange is telling us plenty about its participants, their conversation is poking holes in Joseph Campbell’s construct of the hero’s journey.  By film’s end, Lowery has done plenty of poking: in notions of chivalry and manliness, our vision of early European history, concepts of narrative accuracy, our short-sighted view of purpose and mortality.

Up until now, I’ve not been a huge admirer of Lowery’s work.  I liked A Ghost Story well enough; certain of its images linger with me still, though it felt unsatisfying as a narrative.  2018’s The Old Man & the Gun, with Robert Redford as a bank robber, was good but not especially memorable.

But The Green Knight is on another level entirely.  Of the features I’ve seen so far this year, it strikes me as the one most likely to endure into classic status.  Watching it, you’re quite aware it’s engaging your critical thinking, but it also succeeds as an engrossing tale, a quite-possibly perfect marriage of sound and image.

Its superlative world creation cast me in mind of Martin Scorsese’s The Last Temptation of Christ.  Both films excel at making familiar sagas unfamiliar again, rightly undermining our confidence in entering the headspace of people with utterly different worldviews.  Where Scorsese used Peter Gabriel’s otherworldly soundtrack to instill unease, Daniel Hart’s masterful score for The Green Knight is Renaissance music put in a blender with György Ligeti.  (Think man-apes and astronauts standing before the monoliths of 2001, and you’re on the right track.)

With its uber-detailed costumes, interiors, outdoor scenes, and creature effects, we’re reminded that the 6th Century (when King Arthur might’ve lived) was a time when pagan talismans and Christian crosses brushed against each other.  This was a period when people truly believed the fantastical was commonplace, in a deeper way than the fictions peddled by our surviving religions.

Regarding the plot of The Green Knight, the less you know going in, the better.  Some of Gawain’s encounters on his quest are wondrous to the point of gasp-inducing, so it’s best to be surprised (and to see them on a big screen, if possible).

To that end, I’ll curtail my synopsis more than usual.  The film opens on a Christmas celebration at the Round Table of an aging Arthur (Sean Harris).  His nephew Gawain is offered a seat to the king’s right, but feels unworthy surrounded by so many legendary figures.  Their revelry is interrupted by the entry of the Green Knight, a tree-barked humanoid (Ralph Ineson, putting his gravelly, resonant rumble to splendid use).

The Knight issues a challenge in the form of a game.  One of Arthur’s knights may take a swing at him, but if they succeed in hitting him, they must come to his Green Chapel one year hence, where he will return their blow in kind.  Not yet a knight, Gawain nonetheless accepts this summons, setting the story in motion.

Gawain’s lover is a commoner named Essel (a feisty Alicia Vikander), whose status permits her to contest chivalric notions.  When Gawain speaks of his aspirations to greatness, she sensibly retorts, “Is goodness not enough?”  (On reflection, how sad that some notions have yet to die.  How much trouble our nation could’ve been spared, if we had a leader whose slogan was simply “make America good,” rather than a demagogue hearkening to a mythic past, exhorting his drones to make America great again.)

Through word and image, Lowery likewise calls into question our confidence in the truth of our stories.  Twice, we observe Gawain sitting for portraits of limited accuracy.  A noblewoman talks of reading histories in her library, and if they don’t please her, she rewrites them.  Similarly, we see a puppet reenactment of Gawain’s encounter with the Green Knight, with a new ending tagged onto it.

Despite its focus upon male characters, the eloquent women in the film move towards a feminist recasting of the Arthurian legends.  For instance, Lowery adds a meeting with a saint to the original romance, one of the countless females creepily venerated for surrendering their life rather than their virginity.  The film handles their scenes with a satisfying mix of strangeness and contemporary sharpness.

The Green Knight is filled with anachronisms, fitting for a cinematic reenactment of a 14th Century romance that already embellished events of 800 years prior (if they even happened).  In this way, the film is reminiscent of Medieval portraits of Christ and the Virgin, painted with castle battlements behind them; or Shakespeare’s retelling of ancient histories with Elizabethan values.

In a fascinating monologue late in the film, green is said to symbolize both life and decay.  Through these words, Gawain’s journey, and the film’s talk of virtue and achievement, we’re challenged to ask ourselves what truly matters in existence.  With its crafty philosophizing and magnificent visuals, this is a film I’m keen to rewatch on the big screen, as I’m confident it will reward repeat viewings.

July 30, 2021
“Stillwater” Runs Deeper Than Most Crime Dramas
Next Post 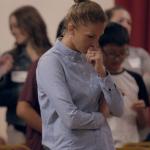 August 6, 2021 “Pray Away”: The Rise, Fall, and Rise of Faith-Based Homophobia
Recent Comments
0 | Leave a Comment
"I don’t think that applies in this case. Public ownership and private ownership of the ..."
Carstonio “The Big Scary S Word”: Socialism ..."
"I think "socialism," like "democracy," can have different meanings, flavors, or degrees. The latter word ..."
Raging Bee “The Big Scary S Word”: Socialism ..."
"The "end" was Bundy's claim in that interview that his murderous career resulted from an ..."
wannabe “No Man of God”: An Audacious ..."
"I’m anti-label on many issues as a matter of principle. Most people’s positions on issues ..."
Carstonio “The Big Scary S Word”: Socialism ..."
Browse Our Archives
get the latest updates from
Secular Cinephile
and the Patheos
Nonreligious
Channel
POPULAR AT PATHEOS Nonreligious
1