Draper on Pain and Pleasure: Part 3

This post is part of a series on Paul Draper’s classic version of the evidential argument from evil. In the previous entry, I summarized Draper’s first argument, which attempts to show that certain facts about the types, quantity, and distribution of pain and pleasure (P&P) are much more probable on the hypothesis of indifference (HI) than on theism (T), and so constitute strong evidence against T and for HI. In this entry, I summarize Draper’s discussion of theistic explanations for those facts.

I apologize for the size of the text in my graphics. If you find it hard to read, you should be able to see the graphics at “full size” by clicking on them one-at-a-time in your browser window.

1. “Theodicies” and Theistic Explanations for Facts about Good and Evil

expansion statement: “a statement h* is an ‘expansion’ of a statement h just in case h* is known to entail h. (Notice that h* can be an expansion of h even if it is logically equivalent to h.)”

With this in mind, consider’s the second part of Draper’s evidential argument from evil again.

Draper argues that if a theodicy is to successfully defeat an argument from evil against theism, it must somehow undermine premise (C) by raising the value of Pr(O / T). In order to evaluate whether an expansion Tn of theism raises Pr(O / T) enough to defeat (C), Draper proposes that we use the “Weighted Average Principle” (WAP):

Draper states that the second part of his evidential argument from evil assumes that theodicies do not “significantly raise” Pr(O / T) and so the argument effectively treats Pr(O / T) as roughly equal with Pr(O / T & ~Tn). In order to show that this assumption is justified, he says he needs to show that Pr(O / Tn) is “not significantly greater” than Pr(O / T & ~Tn). As he puts it:

In other words, I would need to show that, independent of the observations and testimony O reports, we have little or no more reason on Tn than we have on theism ~Tn to believe that O is true.

T1: The Free Will Theodicy, version 1;

T2: The Free Will Theodicy, version 2; and

Before we can discuss T1 and T2, we first need to define a key term:

Both T1 and T2 agree that God endows humans with freedom*. They offer contradictory explanations for the existence of pain, however. According to T1, “God permits pain in order to advance morality.” In contrast, T2 explains pain by adding to T a statement about how one of God’s goals is to “increase the responsibility humans have for their own well-being and the well-being of others and thereby increase the importance of the moral decisions humans make.”

Let’s turn to Draper’s objections to each of these expansions of T.

2. “Free Will and the Advancement of Morality”

Let T1 stand for the following expansion of T:

God exists, and one of his final ends is a favorable balance of freely* performed right actions over wrong actions.

Draper begins his response to T1 by making a very charitable concession to the theodicist. He grants, for the sake of argument, that Pr(T1 / T) is high. In order to defend (C) against T1, his strategy instead is to show that:

I interpret Draper’s 1989 article as offering two reasons to believe that.

First, Draper argues that T1 provides a reason we do not have on T & ~T1 to expect that “the world will contain both pain that influences humans to perfom morally right action and pain that is logically necessary for some of the right actions humans perform.” As Draper points out, “O reports the existence of pain of both these sorts,” so those predictions of T1 are confirmed.

(a) that pain often influences humans to perform morally wrong actions; and

(b) that pain is logically necessary for many of the wrong actions humans perform. 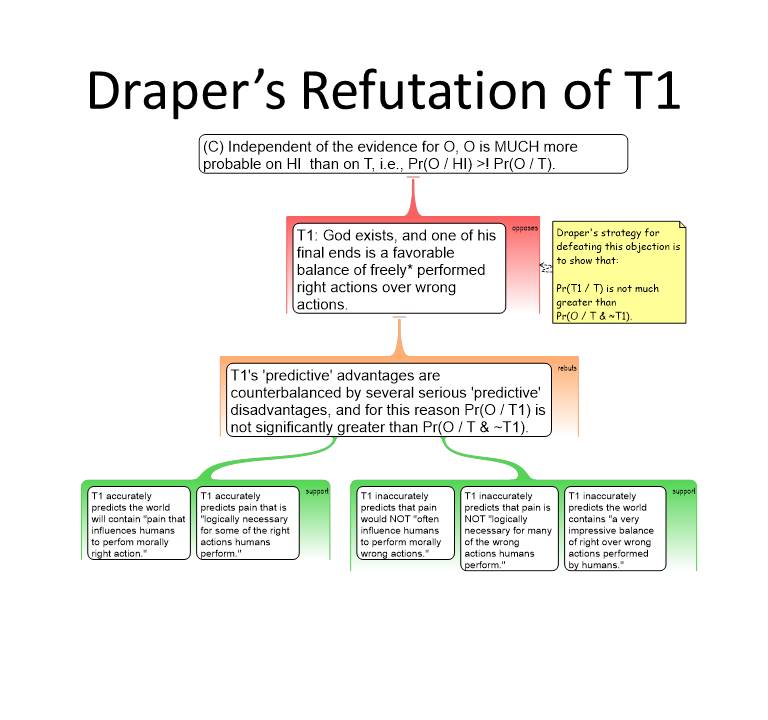 3. “Free Will and Responsibility”

Let T2 stand for the following expansion of T:

T2: God exists, and one of His final ends is for humans to have the freedom* to make very important moral decisions.

Again, Draper assumes for the sake of argument that the antecedent probability of this theodicy is high, viz., Pr(T2 / T) is high. Again, his strategy is to show:

Draper points out that, “assuming there is no better way,” T2 may provide us with a reason that we do not have on T & ~T2 to expect “the existence of pain for which humans are morally responsible.” But, he argues, Pr(O / T2) is not >! Pr(O / T & ~T2) since other facts O reports are even more surprising on T2 than they are on T & ~T2.

First, “Many humans are plainly not worthy of the freedom* to do serious evils.” On the assumption that T2 is true, however, we would predict that humans would only be given great responsibility when they are worthy of it.

Second, “Nor is the human race making any significant amount of moral progress.” If T2 were true, however, we would expect that humans would be “benefitted by having such responsibility.” 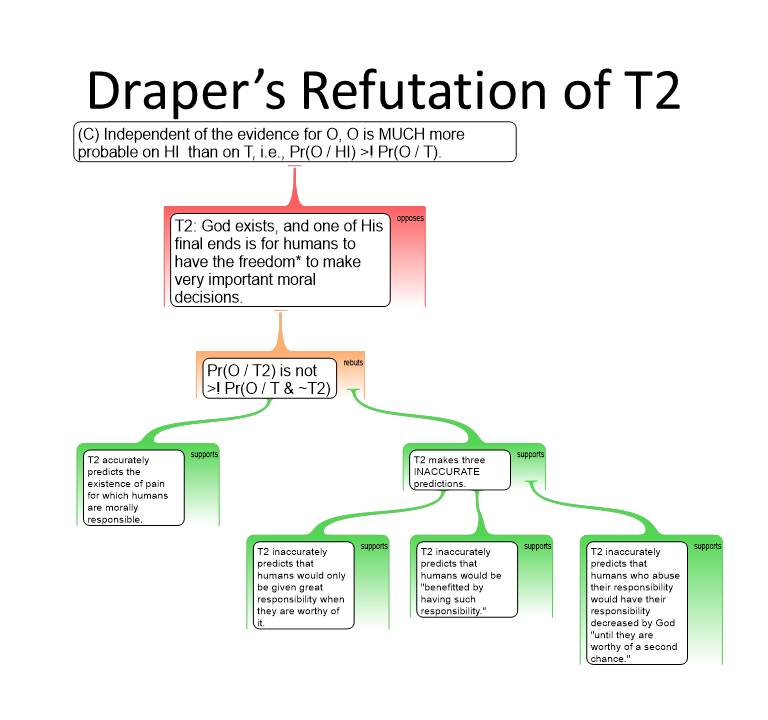 T3: God exists and has a vast amount of knowledge about good and evil and how they are related that humans do not have.

Unlike T1 and T2 where Draper granted for the sake of argument that they were antecedently very probable on T, Draper does not make such a concession for T3. It isn’t necessary. As Draper correctly states, Pr(T3 / T) = 1. This, in turn, entails that Pr(O / T) = Pr(O / T3).

But, as Draper argues, T3 fails to defeat O because

We have no more antecedent reason to expect that [God’s additional knowledge is such that he would permit any of the facts O reports to obtain], than to expect that God would have unknown reasons for preventing evil.

Observant readers will notice that the sentence just quoted just is an application of WAP to the idea that God has unknown reasons for his actions.

Furthermore, however much reason we might have on T3 to expect humans would be “unable to product a plausible theistic explanation” for the facts O reports, we have “even more reason” on  HI to expect this. Thus, T3 does not significantly raise the value of Pr(O / T). 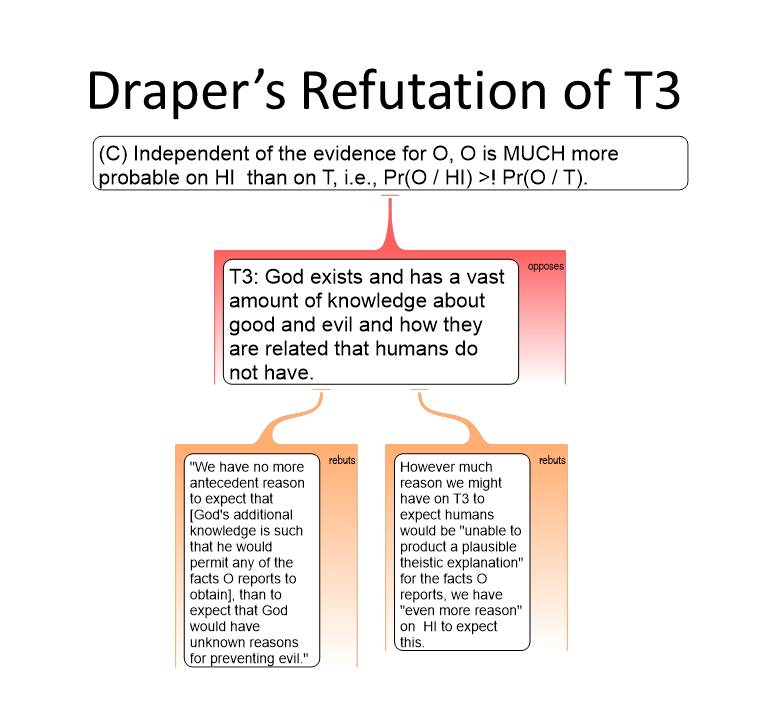 December 7, 2014 Draper on Pain and Pleasure: Part 4
Recent Comments
0 | Leave a Comment
Browse Our Archives
get the latest from
The Secular Outpost
Sign up for our newsletter
POPULAR AT PATHEOS Nonreligious
1

Nonreligious
An F-Inductive Argument from Consciousness for Theism, Revisited
The Secular Outpost

Nonreligious
Is It Time to Rename the 'Problem of...
The Secular Outpost

Nonreligious
When Are Appeals to Human Ignorance a Legitimate...
The Secular Outpost
TRENDING AT PATHEOS Nonreligious