First, let me back up for a moment and provide a key definition.  Swinburne defines “religious experience” in Chapter 13 of The Existence of God (2nd edition, hereafter: EOG, where he presents his Argument from Religious Experience, hereafter: AFR):

For our present purposes it will be useful to define it [a ‘religious experience’] as an experience of God (either of his just being there, or of his saying or bringing about something) or of some other supernatural thing. (EOG, p.295)

Note the emphasis on TREs: “an experience of God”.  Swinburne does not limit religious experiences to experiences of God, since the definition also includes experiences “of some other supernatural thing”.  However, Swinburne immediately points out that his focus is on TREs, especially on one specific kind of TRE:

For most of the discussion I shall be concerned with experiences that seem to be simply of the presence of God and not with his seeming to tell the subject something specific or to do something specific. (EOG, p.296)

So not only is Swinburne’s argument focused on TREs, but it is focused on a specific subset of TREs, what I have referred to as “generic” TREs.

Statements of key points in his argument also focus on TREs:

…a religious experience apparently of God ought to be taken as veridical unless it can be shown on other grounds significantly more probable than not that God does not exist. (EOG, p.321)

One who has had a religious experience apparently of God has, by the Principle of Credulity, good reason for believing that there is a God… (EOG, p.325)

Swinburne’s definition of ‘religious experience’ has a flaw, if taken as it stands.  It is not clear that one can have “an experience of God” if there is no God.  Swinburne does not intend to beg the question about the existence of God, and in the context of  the opening of Chapter 13, it is fairly clear that what he had in mind is an experience in which is seems (epistemically) to the subject that God is present (or that God is communicating a message to the subject, or that God is performing some action).

Swinburne leaves open the possibiilty that it might seem (epistemically) to a person that God is present when in fact there is no God, and thus God was NOT present to that person.  In other words, one can have a TRE that is non-veridical.  Having a theistic religious experience does NOT imply or entail that God was present or that God exists.  It might be the case that all TREs are non-veridical, that all TREs are misleading experiences.  Therefore, the occurrence of TREs does not in and of itself logically imply that God exists.

Recall that Swinburne saves his presentation of AFR until after all other major considerations for and and against the existence of God have been covered (in his view).  He believes that other relevant evidence shows that the existence of God is somewhat probable, that theism has a probability somewhere between .4 and .5:

But Swinburne is clearly talking about a conditional probability, a probability that is based on the evidence in the premises of his previous arguments for and against God.  Let’s use a letter to represent this background evidence that was considered prior to examination of AFR:

k: [the background evidence of the premises of the inductive arguments for and against God previously presented by Swinburne]

Now we can represent the probability range more accurately:

If AFR is as good as Swinburne thinks, then the evidence in the premises of this argument should bump up the probability significantly, to make the existence of God “more probable than not”:

e: Many people have had generic TREs which are not subject to special considerations that cast doubt on the veridicality of those TREs.

If we have before us a collection of clean (i.e. no special considerations apply) generic TREs, and if we could somehow determine that one TRE in this collection was in fact veridical, that would, by itself, make it certain that God exists.  From that point forward any further instances of TREs would need to be evaluated on the basis of a NEW prior probability of the existence of God.  This new information, that at least one TRE was veridical, would shift the prior probabililty of the existence of God from somwhere between .4 and .5, all the way up to the maximum probabilty: 1.0.  In other words, as soon as one single TRE has been determined to be veridical, we have good reason to be much less skeptical about the veridicality of other TREs.

A similar sort of relationship appears to hold in the case that we determine a particular TRE to be non-veridical.  If someone claims to have had an experience of the presence of God, but we determine that God was NOT present on that occasion, then we have also determined that God does NOT exist.  For if God DID exist, then God would have been present in the time and place that the person who claims to have experienced God had this experience that seemed to him/her to be an experience of the presence of God.  If God exists, then God exists at all times and at all places.

Furthermore, according to Swinburne, if God exists, then God is involved in the causation of any religious experience that seems (to the subject) to be an experience of God: 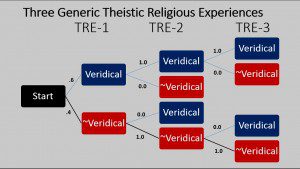 I don’t think Swinburne was aware of this implication of his view of the implications of determining a TRE to be veridical:

There are large numbers of people both today and in the past who have had religious experiences apparently of the presence of God and that must make it significantly more probable that any one person’s experience is veridical. (EOG, p.323-324)

March 18, 2015 G&T Rebuttal, Part 4: Chapter 5
Recent Comments
0 | Leave a Comment
"In my worldview, the entire concept of "natural law" has no relevance in the 21st ..."
Jeb Barrett Aquinas and Homosexual Sex – Part ..."
"Oh, I gonna play THIS game. Maffs is always funz.Trump owns 347,865* sq feet of ..."
Cozmo the Magician OFF TOPIC: Fallon’s Fallacy
"Well, it is as clear as can be where the argument was deficient. But I ..."
Ryan M OFF TOPIC: Fallon’s Fallacy
"Why the difference from the other research group numbers, and so much higher than the ..."
Bradley Bowen OFF TOPIC: Farewell Donald Trump
Browse Our Archives
get the latest from
The Secular Outpost
Sign up for our newsletter
POPULAR AT PATHEOS Nonreligious
1