Craig’s primary response to this criticism is that the death of Jesus on the cross is uncontroversial among biblical scholars:

The reason that I personally have not devoted any space to a discussion of the death of Jesus by crucifixion is that this fact is not in dispute.  This historical fact is not one that is controversial among biblical scholars.

Craig then quotes two biblical scholars in order to support his point:  Luke Timothy Johnson and Robert Funk, co-founder of the Jesus Seminar.

In the previous post in this series, my main response to Craig is to point out that (a) the judgment of Evangelical Christian biblical scholars on this question does not carry much weight, and that (b) biblical scholars who are more skeptical about the reliablility of the Gospels, such as Luke Johnson and Robert Funk, DO NOT BELIEVE that it is an historical FACT that “Jesus was alive and walking around in Jerusalem on Easter Sunday,  less than 48 hours after Jesus was (allegedly) crucified.”

A second response to Craig’s main point is that given the skeptical assumptions made by biblical scholars like Luke Johnson and Robert Funk, it is doubtful that their great confidence in the crucifixion of Jesus and in the death of Jesus on the cross is rationally justified.  I will now focus my attention on the development of this second response to Craig’s main point.

The Devil is in the Details

Although biblical scholars who are more skeptical about the Gospels (than Evangelical Christian biblical scholars) do sometimes make general statements about the crucifixion and death of Jesus on the cross being highly probable or nearly certain, when we look into the details of their views about the Gospels and about the stories about Jesus being crucified, we see that they don’t  actually have adequate grounds for their confident judgments that Jesus’ crucifixion and death on the cross are firmly established historical facts.

Since Craig has quoted from Luke Timothy Johnson as an example of a biblical scholar who is very confident that Jesus was crucified and that Jesus died on the cross,  I will begin by taking a closer look at Johnson’s evidence and reasons for his great confidence about these historical claims in the light of Johnson’s own skeptical assumptions about the Gospels.

First of all, the typical Evangelical Christian will think that the Gospel accounts of the crucifixion and death of Jesus are sufficient to prove that Jesus was crucified and died on the cross.  But Johnson would not agree with this assumption, because he has a more skeptical view about the historical reliability of the Gospels.  Johnson compares the Gospel accounts about Jesus with the accounts that we have of Socrates, and he finds the Gospels to be more questionable and problematic than the accounts we have of Socrates:

The problems facing the seeker of the historical Jesus are even more severe [than the problems facing the seeker of the historical Socrates].  Although the biographies of Jesus…were composed within forty to sixty years of Jesus’ death, that is still greater than the memoirs about Socrates composed by Xenophon and Plato.  Socrates, furthermore, was remembered by disciples who were longtime companions and eyewitnesses.  Although the Gospels undoubtedly bear within them evidence of firsthand sources and even eyewitnesses, such material is not identified as such, and the narratives as a whole were most probably composed by authors of the generation after that of Jesus’ immediate followers. (The Real Jesus, 1st paperback edition, p.107)

According to Johnson, the Gospels were NOT written by “disciples who were longtime companions and eyewitnesses” of the life or death of Jesus.

Johnson allows that the authors of the Gospels might well have used some information from “firsthand sources and even eyewitnesses”, but he points out that we don’t know when they are doing so.  Suppose that half of the information contained in one of the Gospels was based on “firsthand sources and even eyewitnesses”.  That could be true even if the passion narratives (which tell the story of Jesus’ crucifixion and death on the cross) in all four Gospels were pure fiction.

If we knew that half of the information in a particular Gospel was based on “firsthand sources and even eyewitnesses”, then we might infer that at least half of the events or details in the Gospel were historically reliable (although without knowing anything about the personality, character, history, mental health and intelligence of the persons who were the supposed eyewitnesses, this would be a questionable inference), but since we don’t know which events or details have such backing, it would be the toss of a coin as to whether a given event or detail had such eyewitness evidence behind it.  But we don’t even know this much.  We don’t know whether 10% of the events and details of a particular Gospel are based on “firsthand sources and even eyewitnesses” or  whether 30%  or 50% or 70% of events and details are based on such evidence.  Thus, the weak concession that Johnson makes here is of little significance.

Johnson goes on to note further problems concerning the historical reliability of the Gospels:

As for the Gospels themselves, the critical problems they pose the historian are notorious.  The most obvious and fundamental difficulty is that they are all written from the perspective of faith, a perspective that affects not just one part of the story or another, but the entire narrative from beginning to end.  Depsite sharing a faith perspective, the four Gospels dramatically disagree in their accounts.  The greatest difference is between John and the three Synoptics (Matthew, Mark, and Luke).

All critical scholars agree that the reason for the strong similarity among the three Synoptics is that they are literarily interdependent.  According to  the majority scholarly opinion concerning this interdependence, Matthew and Luke both use Mark in the construction of their narratives…the synoptic interdependence means that, for strictly historical purposes, these three Gospels in reality represent a single source.  (TRJ, p.107-108)

The content of the Gospels is shaped by ideology and theology, and the Gospel don’t provide us with four independent accounts of the life of Jesus, but only one or possibly two accounts, since the Gospels of Matthew and Luke use Mark as a primary source of their information about Jesus.

Johnson goes on to point out several significant inconsistencies between the Synoptic gospels and the Gospel of John, and then comes to a skeptical conclusion:

So many and fundamental are the discrepancies between John and the Synoptics that one of the earliest decisions made by the first “questers” for the historical Jesus was to abandon John as a historical source altogether. …Further research has shown that elements of John’s Gospel may well have value as historical evidence; equally significant, the confidence of earlier scholars in the bedrock solidity of the synoptic story line has yielded to the recognition of authorial creativity there as well. …The point I want to make is that the present shape of the canonical Gopsels is not such as to encourage the historian. (TRJ, p.108)

The Gospel of John was previously believed to be completly unreliable, but now scholars think there may be some historical nuggets here and there in that Gospel, and there is also a “recognition of authorial creativity” in the other Gospels, so all four Gospels are believed to contain some degree of fiction and falsehood, with John being the most historically unreliable of the bunch.

Let’s summarize Johnson’s skeptical view of the Gospels:  they were not written by eyewitnesses; some events and details might well be based on firsthand or eyewitness sources but there is no clear indication as to which events or details are so grounded; they were composed forty to sixty years after the (alleged) crucifixcion of Jesus; the contents of the Gospels are thouroughly shaped by Christian ideology and theology;  there are several significant inconsistencies between the Gospels;  the three Synoptic gospels consitute only ONE historical source, because Matthew and Luke used Mark as a primary source; the Gospel of John is historically unreliable, and although the Synoptics are not as unreliable as John, their authors did sometimes make stuff up (“authorial creativity”).

Johnson reaches this conclusion on the basis of “converging lines of evidence”.   He reviews evidence from “outsiders” (non-Christian authors) as well as “non-narrative New Testament” writings in order to show that some key points of the Gospel accounts are supported by other historical sources.   Some key points, such as the crucifixion of Jesus, are mentioned by various “outsiders” as well as in various “non-narrative” N.T. writings, and according to the “method of convergence” the additional support from these other writings makes the crucifixion of Jesus, and some other key Gospel claims about Jesus, highly probable.

The Gospels by themselves are not sufficient to make it highly probable that Jesus was crucified and died on the cross,  but with the addition of “outsiders” evidence and “non-narrartive” N.T. evidence,  Johnson believes we can show these claims to be highly probable.

It is now time to dive into the details of Johnson’s thinking, the details supporting his view that the historical claim that Jesus was crucified and that Jesus died on the cross are nearly certain or highly probable.  It is in these details that, I believe, we will find the devil lurking.

Here is an INDEX to posts in this series.

Intentional Ministries: When Congregations Are Pastors'...
Roll to Disbelieve
Related posts from The Secular Outpost 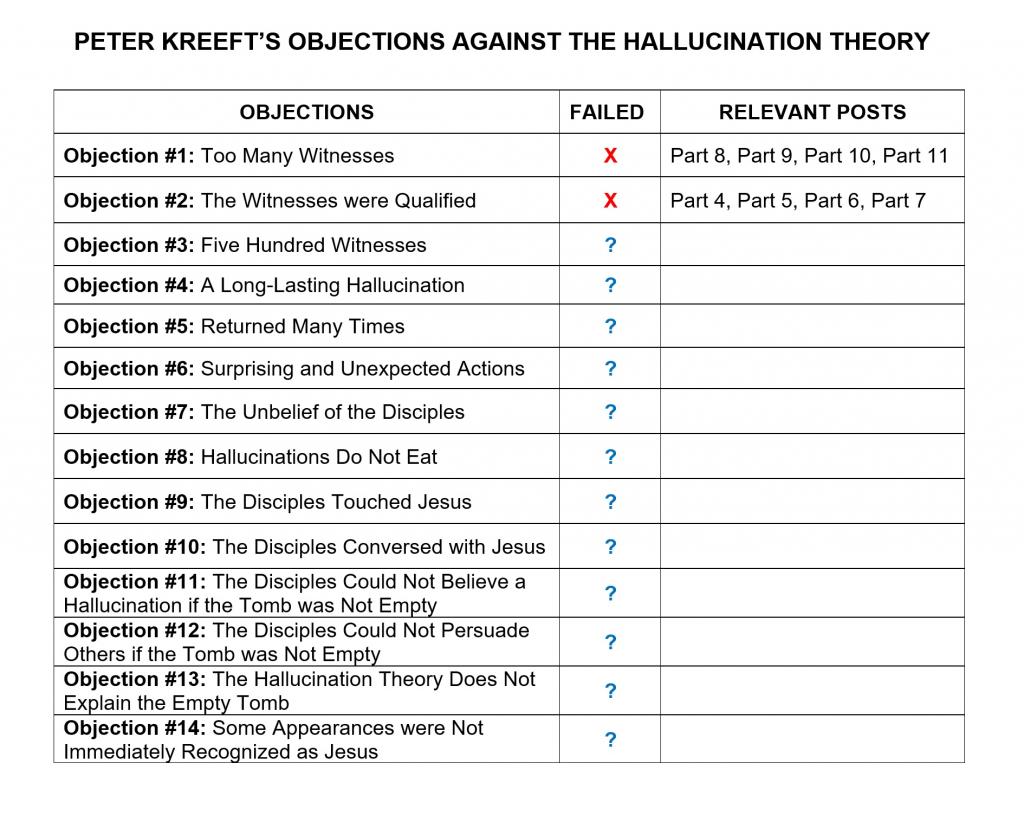