The overarching question for my ten-year plan is:

Is Christianity true or false?

After I clarify this overarching question, the first major question to investigate is this:

I will, of course, at some point need to address the traditional arguments for the existence of God (ontological, cosmological, teleological, and moral arguments).  But I want my investigation to be systematic, and to avoid the problem of BIAS in the selection of arguments and evidence to be considered, especially to avoid the problem of CONFIRMATION BIAS (which is a common problem with Christian apologetics, including Richard Swinburne’s otherwise very careful case for God).

Here are some thoughts on how to approach this investigation:

FIRST, I will need to analyze the meaning of the sentence “God exists”.  I will probably follow Swinburne and analyze this sentence in terms of criteria, but then advocate, as Swinburne did, using a necessary and sufficient conditions definition instead of the criterial definition.

SECOND, following Swinburne, I will determine whether the sentence “God exists” is used to make a coherent statement.

If I determine that the statement “God exists” is incoherent, then that settles the issue:

One should reject the assertion that “God exists” because this sentence does NOT make a coherent statement.

Coherence is connected to logical possibility, so one way of analyzing the question “Does God exist?” is in terms of logical possibility and logical necessity and certainty and probability (click on image below for a clearer view of the diagram) : 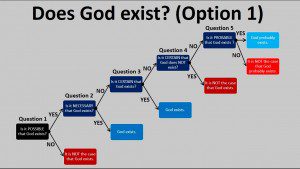 I believe, however, that the sentence “God exists” can be used to assert a coherent statement, if one makes a few significant revisions to the concept of “God”, along the lines that Swinburne has suggested, with a couple of other revisions.  So, I expect that I will determine that some traditional conceptions of God make the sentence “God exists” incoherent, while with a few significant changes, a concept of God that is similar to the traditional conceptions will allow the investigation to continue beyond this initial question of coherence.

THIRD, there are various alleged ways of knowing or having a justified belief that “God exists”, which need to be considered:

3. Deductive Arguments for (and against) the existence of God

4. Non-Deductive Arguments for (and against) the existence of God

Philosophical arguments for and against God usually involve some abstract principles, like the Principle of Sufficient Reason.  While some such premise might seem to be true, it is unlikley that a reasonable and objective thinker will arrive at the conclusion that such a premise is certain.  Because there is likely to be a degree of uncertainty about the truth of one or more premises in any deductive argument for or against the existence of God, the identification of one or more apparently sound deductive arguments will probably not settle the issue, even if all of the sound arguments support one side (theism or atheism).

So, it seems very unlikely that one can avoid examining evidence for and against the existence of God, evidence which only makes the existence of God probable to some degree or improbable to some degreee.  Furthermore, non-deductive arguments or cases can be quite strong.  If you have enough evidence of the right kinds, you can persuade a jury to send a person to his or her death for the crime of murder.  Sometimes, if the evidence is plentiful and the case is strong, a jury will return a verdict of “guilty” for first-degree murder in short order, without any significant wrangling or hesitation by the jurors.  Evidence can sometimes justify certainty or something very close to certainty.

Another possible way to analyze the question “Does God exist?” is in terms of the traditional roles that God plays:

Q1.  Is there a creator of the universe?

Q2.  Is there a ruler of the universe?

Q4. Has this person revealed himself/herself to humans through miracles, prophets, and inspired writings?

The first three questions are sufficient to determine whether “God exists” is true, so the fourth question is a bonus question that allows for a distinction between what I call “religious theism” and “philosophical theism”.

It seems to me that a very basic and important question to ask about God’s character is whether God has attempted to reveal himself/herself to humans.  Judaism, Christianity, and Islam all agree that God has attempted to reveal himself through miracles, prophets, and inspired writings, and this is a very basic and important belief in these western theistic religions.  So, this traditional view of God can be called “religious theism”.  But one could believe in the existence of God without buying into the idea that God has revealed himself through miracles, prophets, and inspired writings.  I call such a stripped-down version of theism”philosophical theism”.

Here is a diagram that spells out this way of approaching the question “Does God exist?” (click on the image to see a clearer version of the chart): 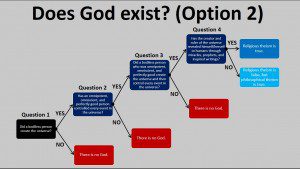 I have in mind, by the way,  time frames for each of the above questions:

Q1*.  Did a bodiless person create the universe about 14 billion years ago?

Q2*.  Has an omnipotent, omniscient, and perfectly good person been in control of every event in the universe for the past 10 billion years (or more)?

Q4*.  Did a bodiless person who is omnipotent, omniscient, and perfectly good, create the universe about 14 billion years ago, and then procede to control every event in the universe for the past 10 billion years (or more), and then in the past 10,000 years reveal himself/herself to humans through miracles, prophets, and inspired writings?

If you have another systematic approach to answering the question “Does God exist?”  I would be interested to hear about it.

February 6, 2016
Decisive Refutation of the Kalam Argument
Next Post

February 6, 2016 When are Theistic Arguments "God-of-the-Gaps" Arguments?
Recent Comments
0 | Leave a Comment
"In addition, the OT/Genesis seemed to condone the adulterous Abraham and Agar relationship. Apparently, Sarah, ..."
Enlightened Leviticus and Homosexuality – Part 11: ..."
"https://uploads.disquscdn.c..."
E.A. Blair Leviticus and Homosexuality – Part 11: ..."
"I just watched a discussion of the different sizes of infinity. It was just as ..."
Jim Jones The Unmoved Mover Argument – Part ..."
"Jehovah's promotion of slavery was a crime against humanity.Jehovah's banning of bacon-wrapped scallops was just ..."
Bradley Bowen Leviticus and Homosexuality – Part 11: ..."
Browse Our Archives
get the latest from
The Secular Outpost
Sign up for our newsletter
POPULAR AT PATHEOS Nonreligious
1