Here is a third option for breaking down the question “Does God exist?” (click on the image below to get a clearer view of the chart): 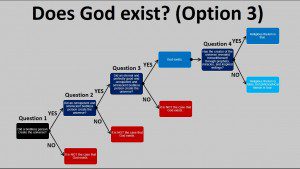 This is a variation on Option 2 (see the previous post in this series).

This is roughly parallel to the step-by-step building up to the full traditional concept of God that Richard Swinburne does in his book The Coherence of Theism.  I have just left out a few of the divine attributes that Swinburne uses in his analysis of the concept of ‘God’, namely: perfect freedom, a source of moral obligation, immutable, and a necessary being.  While these are part of the full traditional concept of God, they don’t seem as central and important as the divine attributes used in the above chart, and I prefer to work with a simpler and more bare-bones concept of God.

Immutability in the strong sense (the idea that God is absolutely unchanging and unchangable) is logically incompatible with God being a person, so I’m doing theists a favor by leaving that divine attribute out.  Immutability in the weaker sense of God’s moral character being unchanging would seem to be implied by the omnipotence, omniscience, and perfect goodness of God, since a perfectly good person would resist becoming an evil person (or even a slightly bad person), and being omnipotent and omniscient would guarantee the success of this effort.  So, there seems to be no need to include immutability in the weaker sense in the analysis of the concept of God.

The divine attribute of necessary being is something philosophers and philosophically-inclined theologians enjoy discussing, but I don’t think this is of much importance to the typical religious believer.  The clearest and most obvious interpretation of ‘necessary being’ is that God’s existence is logically necessary, but this is clearly false, according to Swinburne, and I’m inclined to agree with him on that point.  So, we ought to leave ‘necessary being’ in that sense out of the analysis of the concept of God.

If we simply drop the divine attribute of necessary being from the definition of “God”, we are still left with a being that is very similar to the full traditional concept of God, but without the philosophical/logical issues that come along with this perplexing divine attribute.  One less problematic divine attribute means that it will be easier to make a case for the existence of God, so no Christian apologist or defender of theism should complain about my suggestion to focus on this simpler, more bare-bones conception of God.

* I have a somewhat robust notion of the divine attribute of being eternal.  What I mean by this attribute is that the being in question has always had the other divine attributes and will continue to have all of those other attributes forever.  So, the third question in the chart can be stated more clearly this way:

Since perfect moral goodness and omniscience are characteristics that only a person can have, a being who was eternally perfectly morally good and eternally omniscient would of necessity also eternally be a person.