I was recently asked to participate in a public discussion/debate about the question “Did Jesus Exist?”.  I don’t plan to argue in favor of the mythicist position, just because I don’t think I would do it justice.  I’m not a mythicist, and I have not studied any mythicists in recent years (I read some of G.A. Wells books years ago, and I read Earl Doherty’s The Jesus Puzzle some years ago).  But I do have significant doubts about the existence of Jesus, and especially about the strength of the historical case for the existence of Jesus.

In order to prepare for the discussion,  I pulled out my copy of Bart Ehrman’s book Did Jesus Exist? (hereafter: DJE) and began to re-read his positive case for the existence of Jesus.  I have criticized part of his case previously, so I began reading with the assumption that his case was weak and problematic, at least the initial argument that he makes based on seven allegedly independent Gospels, in Chapter 3.  Upon re-reading this Chapter, my conclusion is that this important part of his case is not just weak, it is a complete and utter failure.

I’m reminded of William Lane Craig’s argument for the claim that “Jesus died on the cross” in his book The Son Rises.  I went through Craig’s argument, line by line, and showed that while he made dozens of historical claims, there was not one single historical fact in the entire passage (there was one reference to one passage from one historical document, but upon examination of the document, the passage, its authorship, and its content, there was no real evidence for the specific historical claim being asserted).

I realize that Ehrman is not a Christian believer, and so obviously he is not a Christian apologist.  But there is a clear parallel between Chapter 3 of Did Jesus Exist? and WLC’s argument for the claim “Jesus died on the cross” in his book The Son Rises.  In both instances, we are set up with the expectation and promise that a strong historical case will be made for a basic Christian belief, but the case includes arguments that are virtually FACT FREE.  I suspect that Ehrman’s thinking was corrupted by exposure to Christian apologetics, and this has, sadly, led him to construct arguments for historical claims without bothering to mess with those inconvenient little things known as historical facts.  Jesus Freaking-H-Christ! (… an historically relevant curse for this occasion).

Nevertheless, I could do a better job defending these basic Christian beliefs with one hand tied behind my back while blindfolded.  I am very confident that I could do a better job, because I would make use of actual historical facts to make my case.  I may not be a brilliant scholar, but I know better than to make a fact-free case for an historical claim.  WLC and Ehrman evidently missed that memo.

Here is how Ehrman characterizes himself and his view on the question of the existence of Jesus:

Apparently evididence matters to Ehrman, except when he is laying out a key argument in his case for the existence of Jesus, because he doesn’t bother to provide ANY historical evidence for his key historical premise, though many dozens of pieces of historical evidence would be required to properly support that premise.

Here is how Ehrman characterizes his main goal in the book:

My goal, however, is neither to please nor to offend.  It is to pursue a historical question with all the rigor that it deserves and requires and in doing so to show that there really was a historical Jesus and that we can say certain things about him.  (DJE, p.37, emphasis added)

Making an argument for an historical claim without presenting any historical evidence in support of the key historical premise of a key argument means that Ehrman not only fell short of fully realizing this goal, it means that Ehrman completely and utterly failed to even partially acheive this goal, at least in terms of the argument about corroboration between seven Gospels that he presents in Chapter 3 (he does manage to do a somewhat better job with the argument presented in Chapter 4).

The basic principle used in this key argument was spelled out in Chapter 2, but is nicely summarized in Chapter 3:

…historians,  who try to establish that a past event happened or that a past person lived, look for multiple sources that corroborate one another’s stories without having collaborated.  And this is what we get with the Gospels and their witness of Jesus.  (DJE, p.75)

There is more than one argument presented in Chapter 3, but a key argument is summarized by Ehrman at the end of Chapter 3:

We are not dealing with just one Gospel that reports what Jesus said and did from sometime near the end of the first century.  We have a number of surviving Gospels–I named seven–that are either completely independent of one another or independent in a large number of their traditions.  These all attest to the existence of Jesus.  Moreover, these independent witnesses corroborate many of the same basic sets of data–for example, that Jesus not only lived but that he was a Jewish teacher who was crucified by the Romans at the instigation of Jewish authorities in Jerusalem.  (DJE, p.92, emphasis added)

One could summarize the key premise of this argument in one sentence (about: Agreements Between Seven Independent Gospels):

(ABSIG) There are seven Gospels which were written within “a hundred years after the traditional date of Jesus’s death” (DJE, p.78) that are “either completely or partially independent” from each other (DJE, p.78) and yet they “agree on many of the basic aspects of Jesus’s life and death” (DJE, p.86).

In the above quotations, there is a subtle clue that indicates Ehrman has failed to do his homework on this argument. The word “many” in the phrase “agree on many of the basic aspects of Jesus’s life and death” points to a fundamental flaw of Chapter 3.  The word “many” is vague.  If Ehrman had actually investigated the evidence on this issue “with all the rigor that it deserves and requires”, then he would have provided a specific number here, instead of the vague quantifier “many”.  But he did not do his homework, and so he was unable to provide a precise quantity.

Agreement on three or four characteristics of Jesus or events in Jesus’s life might qualify as “many” agreements, but that would not be very impressive as an argument for the existence of Jesus.  Presumably, a strong case would involve something on the order of one or two dozen agreements on “basic aspects of Jesus’s life”.  But let’s just consider a conservative and round number of agreements that could potentially constitute a strong case: TEN.

A matrix diagram is the obvious way to present an overview of the relevant historical data.  An ideal matrix, one that represents what is potentially a fairly strong case, would look something like this, where an “X” means that there is at least one passsage in that Gospel that confirms the basic aspect of Jesus’s life (click on the image below for a better view of the matrix diagram): 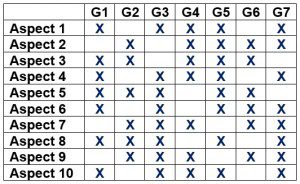 If only two or three out of the seven Gospels support a given basic aspect, on average, then the argument for the existence of Jesus would be pretty weak, and the matrix diagram would look something like this: 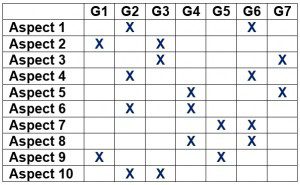 Note that even to make this very weak argument for the existence of Jesus, one would need to provide about 20 to 30 pieces of historical data (quotations from about 20 to 30 passages from the seven “independent” gospels).

Does Ehrman’s matrix look like the first one, with lots of X’s and very few blanks? Or does his matrix look more like the second one, with only a few X’s here and there and lots of blanks?  Neither.  Ehrman has no matrix diagram at all.

So, here is the appropriate matrix diagram representing Ehrman’s argument from the agreement between seven “independent” Gospels (ABSIG): 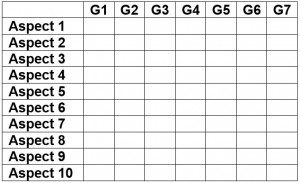 I am not impressed, and I am certainly not convinced.

Ehrman quotes three passages from the Gospel of Mark and one passage from the Gospel of John on pages 87-89, but the point of that evidence was to show that these Gospels include written sources that ultimately were “based on oral traditions” (DJE, p.86) that were “originally spoken in Aramaic, the language of Palestine.” (DJE, p.87).  The purpose of these quotes is to support the claim that the Gospels can be traced back to early oral traditions, traditions that existed shortly after the standard date for the crucifixion of Jesus.

On page 90 of DJE, Ehrman quotes a passage from the third chapter of the Gospel of John, but the purpose of that quote is just to illustrate how Aramaic can be used to determine that some Gospel passages (like the one quoted from John) are NOT based on early oral traditions about Jesus (which were in Aramaic).

If Ehrman had provided twenty to thirty different passages, some from each of the seven “independent” Gospels, showing that two or three of the Gospels support each of ten “basic characteristics” of the life of Jesus, then I would conclude that he had presented an argument which was potentially, at best, a very weak argument for the existence of Jesus. But Ehrman has in fact provided ZERO relevant quotations from the seven “independent” Gospels, so this argument is a complete and utter failure.  It should persuade nobody, because there is no historical evidence provided to back up the main historical premise of this argument.

In Chapter 3 of DJE, Ehrman has presented a FACT FREE argument for the existence of Jesus, which is completely contrary to his claim that he thinks “evidence matters” and completely contrary to his goal to pursue the historical question of whether Jesus exists “with all the rigor that it deserves and requires”.  Ehrman promised devotion to evidence and he promised scholarly rigor, but what he delivered is pure BULLSHIT, at least with his argument concerning Agreements Between Seven Indendent Gospels (ABSIG).

There are other serious defeciencies with this argument in Chapter 3, but I will save discussion of those for another post.

May 12, 2016
Draft Paper on the Jewish Hearsay Testimony and the Empty Tomb
Next Post