What is Christianity? Part 16

In his book Naming the Elephant (hereafter: NTE), the Christian apologist James Sire raises various objections against his previous analysis of the concept of a “worldview” that he had presented in his earlier book The Universe Next Door (hereafter: TUND).

I have reviewed three of Sire’s objections to his earlier cognitivist analysis of the concept of a “worldview” and argued that those objections were unsuccessful (see previous posts 10, 11, 12, and 13).

In this post I will consider some of Sire’s comments in support of the view that a worldview is a story or a “master story”.  The comments that I will now consider are all from a section of Chapter 5 of NTE called “Worldview As Master Story” (on pages 100-105).

Sire’s initial comment in the first paragraph of this section concerns the cross-cultural phenomenon of story telling:

Folklore, myth and literature around the world and from the ancient past to the present tell stories that put present human reality in the larger context of universal cosmic and human meaning.  They act as orienting patterns.  (NTE, p.100)

It is important to understand what Sire is saying about the function of stories found in folklore, myth and literature:

They put X in the larger context of Y.

In the case of such stories, X refers to “present human reality”, and Y refers to “universal cosmic and human meaning”.

Religions, especially the Christian religion, provide stories to help and guide people in dealing with such difficult experiences and events.  A religious story can put such an experience “in the larger context of universal cosmic and human meaning.”  But in order for such a story to have any significant impact on a person, the story must have some meaning or significance, and the meaning or significance must have some logical relationship or relevance to the experience or event of the death of a child.  Otherwise, the story will be meaningless, insignificant, and irrelevant.

Some Christian beliefs are obviously relevant to such a difficult circumstance:

Any stories from the Christian religious tradition that help to communicate some or all of these BELIEFS will obviously have some significance and relevance to Christian believers who experience the death of a child.  Any stories which have no connection with any of these (or other important Christian beliefs about death or loss) will be a story that either fails to have any relevance or significance, or that fails to have any specifically Christian significance.  We see from this specific example, that to “put X in the larger context of Y” is essentially and necessarily an INTELLECTUAL or COGNITIVE activity that involves connecting various beliefs to particular experiences or events.

In the remaining portion of the first paragraph in the section called “Worldview As Master Story”  Sire identifies worldviews with stories:

In short, they [stories that constitute “Folklore, myth and literature”] function as worldviews or parts of worldviews.  The worldviews of Buddhism, Hinduism and primal religion are embedded and embodied in stories.  …these are the stories by which societies interpret the universe and life around them. (NTE, p.100)

Sire uses a metaphor here that is very similar to the previously discussed metaphor of “incarnation”.  My cognitivist analysis of the concept of a worldview fits very nicely with the idea that a worldview can be “embedded and embodied in stories”.   In other words, stories can be used to communicate beliefs, to teach or inculcate beliefs, and to reinforce beliefs.  So, beliefs and systems of beliefs can be “embedded and embodied in stories”.

But, it is also possible for a STORY to be “embedded and embodied in [other] stories”.  In fact, the idea of a “master story” suggests that a general overarching story can be incorporated into various other more specific stories.  So, it is not plausible to use my previous line of reasoning to dismiss Sire’s idea that a worldview IS a story.   Both my cognitivist view of worldviews as systems of beliefs and Sire’s proposed view that a worldview is a story fit with the metaphor of being “embedded and embodied in stories”.

Sire expresses doubt about his previous conception of worldviews, based on the idea that stories play a very important role in how we understand life and make important decisions:

Both in the works of most Christian worldview analysts–such as James Orr, James Ulthuis, Arthur Holmes and Ronald Nash–and my own Universe Next Door, worldview is first described in intellectual terms, such as “system of beliefs,”  “set of presuppositions” or “conceptual scheme.”  I want now to ask whether this is quite accurate.  Does it not miss an important element in how people actually think and act?  Isn’t a story involved in how we make the decisions of belief and behavior that constitute our lives?  Would it be better to consider a worldview as the story we live by? (NTE, p.100-101, emphasis in original)

I think the main objection I have to this comment by Sire is that stories must be interpreted and understood in order to have meaning and significance, in order to influence our thinking and behavior.  Interpretation, understanding, meaning, and significance are all essentially and necessarily intellectual and cognitive in nature.  Stories have impact and influence only if they are relevant to what we believe and what we value.

There are two basic types of stories: fiction and non-fiction.  With a fiction story, such a story can have meaning and significance even though the story is not true, and it is not intended to be viewed as being literally true.  Jesus sometimes used parables to communicate his point of view.  Some parables are fiction stories, such as the parable of the Good Samaritan, and the parable of the Prodigal Son.  Those parables consist of short fiction stories that make a significant point in a memorable way.  So, clearly fiction stories sometimes play a role in communicating a religion or a part of a religious point of view.

The liberal scholars of the Jesus Seminar, for example, are very skeptical about the contents of the Gospels, but most of them believe that Jesus was an actual historical person, and that the canonical Gospels (as well as some non-canonical gospels) contain sayings and teachings that do in fact originate with the historical Jesus.   So, although the scholars of the Jesus Seminar reject a large portion of the Gospel stories about Jesus and a large portion of the sayings of Jesus presented in the Gospels, they still view some of the stories and some of the sayings as being historical, as being more-or-less true information about the historical Jesus.

News stories are examples of non-fiction stories.  A news story can, of course, be false, or be partially false.  But a news story is presented AS being a true story, as presenting information that is literally true.  Here is a recent news story that most of us have heard:

Orlando, Florida (CNN) An American-born man who’d pledged allegiance to ISIS gunned down 49 people early Sunday at a gay nightclub in Orlando, the deadliest mass shooting in the United States and the nation’s worst terror attack since 9/11, authorities said. …

Mateen carried an assault rifle and a pistol into the packed Pulse club about 2 a.m. Sunday and started shooting, killing 49 people and wounding at least 53, officials said.
After a standoff of about three hours, while people trapped inside the club desperately called and messaged friends and relatives, police crashed into the building with an armored vehicle and stun grenades and killed Mateen.
http://www.cnn.com/2016/06/12/us/orlando-nightclub-shooting/
=================

This story is composed of a series of claims:

June 16, 2016
Dunning-Kruger Effect in Action: How NOT to Defend a 'Best' Explanation
Next Post 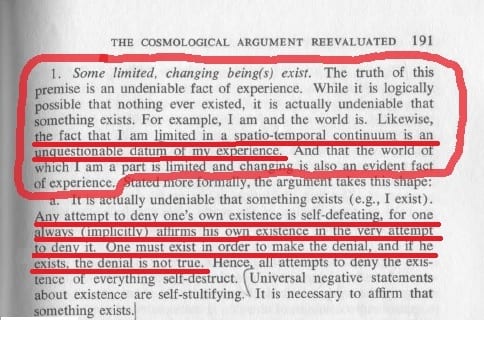 Nonreligious
The Unmoved Mover Argument - Part 5: Something...
The Secular Outpost