32. There is an objective moral law.

34. There is a being that is the supreme moral lawgiver.

Premise (32) is a controversial claim, and so a good reason or agument is needed to support this claim.  Geisler gives three reasons in support of (32) on pages 23 and 24 of WSA:

Life in “a state of nature” where there are no constraints on human behavior would be nasty, brutish, and short.  There are obvious practical and self-interested reasons for prefering a world or society in which violent and harmful human actions were constrained.  We don’t need to posit mysterious metaphysical entities (i.e. “objective moral laws”) to explain the fact that there are widespread (in various cultures and socieities) constraints against violent and harmful human actions.

The expectation that others will follow a set of moral rules or principles can be explained without appealing to the existence of  “objective moral law”.   A subjective, human-created set of moral rules or principles would presumably be based upon some practical and self-interested motivations (such as the benefits of cooperation between humans, and of avoiding “a state of nature” in which life was nasty, brutish, and short).  But to acheive the goals of the practical and self-interested motivations, a society must actually constrain human behavior to a significant degree.  A socieity, for example, would have to actually be successful in keeping murder and rape down to a low level; otherwise,  the moral rules or constraints would fail to provide significant practical advantages.

It is obvious that inculcating belief in the importance of such moral rules or constraints in the individuals of the society would help to ensure that the society was successful in actually reducing the incidence of murder and rape, for example.   Thus, we would expect that although most societies would use punishments of murder and rape to reduce the incidence of these behaviors, that most societies would ALSO inculcate beliefs and values in individual members of society so that individuals would view the moral rules and constraints of the society as important and worthy of being followed and maintained.

Therefore, even if moral rules and constraints are purely  human creations that are based on practical and self-interested motivations, we would expect that most societies would inculcate beliefs and values in individuals such that most people in the society would “expect others to follow some moral codes”.  Therefore, Geisler’s third reason fails to show that there is such a thing as “objective moral law”.

Premise (33) has the same sort of ambiguity as the second premise of Geisler’s argument from design.  Does “imply” mean “logically entail”?  If not, then what does it mean?

With designs and designers we have some actual experience upon which we can base an empirical generalization connecting designs to designers.  But with moral laws, we have no such actual experience.  It is not clear that there are such things as “objective moral laws” at all, but even assuming that such things exist, the origin of such laws are not subject to experience and observation in the way that designs and designers are subject to experience and observation.  So, it seems implausible to assert an empirical or contingent relationship between moral laws and moral lawgivers.

Furthermore, not only is the truth of (33) problematic, but there is good reason to suspect it is false.  Some analogous claims are false or dubious:

A. Laws of physics imply a physical lawgiver.

B. Laws of mathematics imply a mathematical lawgiver.

Because claims that appear to be analogous to (33) are false or dubious, this gives us a good reason to doubt that (33) is true.

Both premises of Geisler’s moral argument are dubious and problematic, and the inference in  is logically invalid, so Geisler has FAILED to show that there is a being that is “the supreme moral lawgiver”.  So, he has nothing to build upon in Phase 2 of his case for the existence of God (in terms of the moral argument that he presented in Phase 1 of his case).

The Fourth Argument in Phase 2

However, Geisler’s fourth argument in Phase 2 is clearly focused on “the supreme moral lawgiver” whose existence Geisler supposedly established in Phase 1.  So, once again, Geisler is ASSUMING that the cause of the beginning of the universe is the same being as some other being that he thinks he has shown to exist, namely “the supreme moral lawgiver”.  But Geisler has provided no reason whatsoever to believe that these two beings are the same being.   Once again, his Phase 2 argument about the supreme moral lawgiver FAILS, just like the other Phase 2 arguments FAILED, because he made similar assumptions for which he provided no reason whatsoever to believe.

34.  There is a being that is the supreme moral lawgiver.

35. A moral law exists in the mind of every moral lawgiver.

36. A moral law exists in the mind of the supreme moral lawgiver.

38.  The supreme moral lawgiver is a moral being who knows the difference between right and wrong.

39.  The being that caused the universe to begin to exist is also the supreme moral lawgiver.

40. The being that caused the universe to begin to exist is a moral being who knows the difference between right and wrong.

Here is a diagram of this argument, with the conclusion at the top, and the supporting premises below it (click on the image below for a clearer view of the diagram): 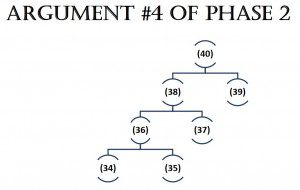 There are two obvious major problems with this argument, right off the bat.  First, because Geisler FAILED to establish the conclusion of his moral argument, there is no good reason to believe that premise (34) is true.

Second, in order for Geisler’s case to work, he needs to show that the being “that caused the universe to begin to exist” has the characteristics that are (allegedly) possessed by “the supreme moral lawgiver”.  To do so, he must use premise (39),  which asserts that these two beings are the same being.  Premise (39) is obviously a controversial claim, so it is a question begging premise, unless and until Geisler provides a good reason or argument to show it to be true.  But Geisler has provided no reason whatsoever to believe that premise (39) is true.  So, we ought to reject premise (39).

So, it is clear from the start that Argument 4 of Phase 2 is a FAILURE, and that Geisler has FAILED to show that claim (40) is true.

There are other problems with this argument, which I will explore in the next post in this series, and there is also another Phase 2 argument to consider: Geisler’s argument for the claim that the being that caused the universe to begin to exist is a morally good being.

November 24, 2016 Ex-Apologist on Epicurean Cosmological Arguments for Matter's Necessity
Recent Comments
0 | Leave a Comment
Browse Our Archives
get the latest from
The Secular Outpost
Sign up for our newsletter
POPULAR AT PATHEOS Nonreligious
1

Nonreligious
Leviticus and Homosexuality - Part 1: Outline of...
The Secular Outpost