The Beating Heart of Unapologetic

It is not an overstatement to say that Mr. Loftus is a crusader against faith, and that this book is a part of his crusade against faith.  This is made clear from the start of the book, beginning with the Introduction:

The dividing line is between atheist philosophers who think faith has some epistemic warrant and those who don’t.  I don’t.  Faith has no method, solves no problems, and is an utterly unreliable guide for knowing anything objective about the nature of nature.  (Unapologetic, p.14-15, emphasis added)

There is further confirmation in Chapter 1 (“My Intellectual Journey”) that the dragon Mr. Loftus wants to slay is “faith”.  In Chapter 1 we learn that Loftus did not invent this crusade himself, but joined in an already existing crusade against faith led by Peter Boghossian:

Boghossian first got my attention a year before I read his provocatively titled book, A Manual for Creating Atheists.  I first heard of him when a talk he gave titled “Faith Based Belief Processes are Unreliable” hit the web in April 2012.  He began by critically examining several paranormal beliefs where faith was shown to be unreliable for gaining knowledge. …he said, “We are forced to conclude that a tremendous number of people are delusional.  There is no other conclusion that one can draw.”  …[and] he said, “The most charitable thing we can say about faith is that it’s likely to be false.”  He had a way of putting things that resonated with me.  Faith itself is the problem.  (Unapologetic, p.32, emphasis added)

Before I, or any person who is a critical thinker (i.e. who “sits at the adult table”) chooses to join Loftus in his crusade against “faith”, we need to have a very clear understanding of what Loftus means by the word “faith”.

Rush Limbaugh is undeniably on a crusade against “liberalism”.  But before I, or any person who is a critical thinker (i.e. who “sits at the adult table”) chooses to join Limbaugh in this crusade, we need to understand what Limbaugh means by “liberalism”.

I think that Limbaugh has no clue what the word “liberalism” means.  This word is just an unclear insult that Limbaugh casts upon any person or any law or any policy or any program that Rush Limbaugh happens to dislike.

There is nothing wrong or unreasonable about joining a crusade against something, but there is something highly unreasonable about joining a crusade against “X” when we have no clear idea of what “X” means.  Those of us who “sit at the adult table” do NOT join crusades without first being very clear about the purpose of the crusade.

In Part 4 of this series I admitted that I was wrong in making the following criticism (in Part 3 of this series) of Loftus’ book Unapologetic:

His failure to provide any definition or analysis of the meaning of any of the key words and phrases in his central argument suggests that he does not have a clear idea of what those words mean.

This statement is incorrect and unfair to Loftus, especially in relation to the meaning of the key word “faith”.  On closer examination, Loftus makes several statements in Unapologetic which appear to be brief definitions of the word “faith”, and some, though not all, of those definitions are fairly clear.

I have now read the Introduction, and Chapters 1 though 8 of Unapologetic.  I don’t plan on reading Chapter 9, because the title of that Chapter (“On Justifying Ridicule, Mockery, and Satire”) indicates that it is not relevant to the main question at issue (and that it assumes one has accepted Loftus’ point of view about faith and is willing to join his anti-faith crusade).

So, Loftus has given himself a degree of “plausible deniability” by failing to label any of his statements about faith as recommended definitions of “faith”.

But because it is so obviously idiotic to lead a crusade against “faith” without providing a clear definition of what the word “faith” means (that would be something that an idiot like Rush Limbaugh would do), I think it is fair to assume that the definition-like statements that Loftus makes about “faith” in his book Unapologetic are in fact recommended defintions of the word.  I am going to assume (for now at least) that Loftus belongs “at the adult table” with the rest of us critical thinkers, and thus that he did in fact provide at least one or two recommended defintions of “faith” in his book Unapologetic.

Definitions of “faith” in Unapologetic

Below are the seven passages that appear to contain brief definitions of the word “faith”.  The statements in red font are what I take to be the primary defintions, the definitions worthy of serious consideration.  The phrase “cognitive bias” appears in blue font to show how often it appears in (or near) these apparent definitions:

Faith adds nothing to the probabilities.  It has no method and solves no problems.  If faith is trust we should not trust faith.  It’s a cognitive bias keeping believers away from objectively understanding the truth.  (Unapologetic, p.37, emphasis added)

…faith is always about that which lacks sufficient evidence or even no evidence at all.  I consider faith to be an unrecognized-as-yet cognitive bias that gives believers permission to pretend what they believe is true, even if there is no objective evidence at all… (Unapologetic, p. 92, emphasis added)

Just consider what’s wrong with Islam, Judaism, Mormonism, Jehovah’s Witnesses….  Faith.  The adherents of these religions do not believe based on sufficient evidence, because faith is an irrational leap over the probabilities.  If they thought exclusively in terms of the probabilities by proportioning their belief to the evidence (per David Hume), they would not believe at all.  (Unapologetic, p.125, emphasis added)

Faith should one day be labeled a cognitive bias.  It keeps one’s cognitive faculties from functioning properly.  Faith is an irrational, unevidenced, or misplaced trust in something or someone. (Unapologetic, p.152, emphasis added)

Because faith requires special pleading and so many other informal fallacies, I can say faith itself is a fallacy.  It’s certainly a cognitive bias that causes believers to overestimate the probabilities on behalf of faith. (Unapologetic, p.169, emphasis added)

I take David Hume’s principle as axiomatic, that the wise person should proportion his or her conclusions to the available evidence.  Going beyond the probabilities of the evidence is unreasonable.  That’s what faith does when we embrace it.  Faith takes believers beyond the probabilities.  Faith is an irrational, unevidenced, or misplaced trust in something or someone. (Unapologetic, p.194, emphasis added)

ALL cognitive biases keep people “away from objectively understanding the truth”–that is simply an implication of what it means to be a “cognitive bias”.  The second part of the definition is true or correct, but uninformative; it fails to specify a particular TYPE of cognitive bias, because it states something that is true of any and every cognitive bias.  So, this definition is not worthy of any further serious consideration.

It’s certainly a cognitive bias that causes believers to overestimate the probabilities on behalf of faith. (Unapologetic, p.169)

The definition in Chapter 4 reinforces the idea that the genus of faith is, for Loftus, a “cognitive bias”, but the rest of this defintion is problematic:

…that gives believers permission to pretend what they believe is true…

The phrase “giving permission” is metaphorical, and is thus a problematic expression to use in a definition statement, and the whole idea of “pretending what they believe is true” is unclear and problematic.  It might well be the case that people sometimes  “pretend what they believe is true”  but this is, in most cases, a difficult sort of thing to identify and verify, so this seems like a bad criterion to use in a definition of a key concept.  Other definitions provided by Loftus do not involve such tricky and difficult to identify and verify characteristics.  So, I’m going to ignore this definition in Chapter 4.

Faith is an irrational, unevidenced, or misplaced trust in something or someone. (Unapologetic, p.152)

The Modified Definition of “faith” from Chapter 2

The definition of “faith” in Chapter 2 and the modified version of that definition are, in a way, too clear.  I say that because, they are clear enough to make it easy to identify these as being definitions of ANOTHER concept, a very important concept in the theory of critical thinking and in the field of informal logic, namely:  CONFIRMATION BIAS.

If we take Loftus definition of “faith” in Chapter 2 seriously (and assume that he belongs at the adult table), or if we take the modified version of that definition (which incorporates a key element from the defintion in Chapter 7) seriously, then a very imporant implication follows:

FAITH simply IS the same thing as CONFIRMATION BIAS

But from Loftus’ point of view, this implication also has some negative aspects:

* The word “faith” (spelled as “feith”) appears in the first English translation of the New Testament, which was a hand-written manuscript created by John Wycliffe in about 1378, more than six centuries ago…

“The very first translation of the scriptures into the English Language was done in the 1380’s by John Wycliffe, who is called “The Morning Star of the Reformation”. Because he lived nearly a century before the 1455 invention of the printing press, his New Testaments and Bibles were of course, hand-written manuscripts. Wycliffe is also credited with being the inventor of bifocal eyeglasses (necessity being the mother of invention), though history tends to more frequently credit Ben Franklin with improving upon Wycliffe’s invention of bifocals.”

“Wycliffe’s hand-written manuscripts of the English scriptures are very challenging to read, but being the very first English scripture translation (albeit a translation from the Latin, and not the original Biblical languages), the Wycliffe translation is extremely historically important. For this reason, in the 1731, a reprint of Wycliffe’s circa 1378 manuscript was produced in modern easier-to-read type. It preserves the original Middle-English spellings and wordings 100% faithfully, but it simply makes the text easier to read by rendering the text as typeface, rather than being hand-written.”

Here is the Wycliffe’s translation of  the opening verses of 1 Corinthians Chapter 12, which includes the word “feith” in verse 9 (click on image below for a clearer view of the text): 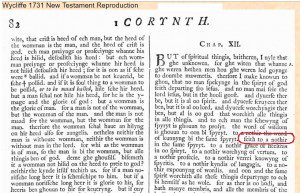