Some practitioners of meditative disciplines or people who have had mystical experiences claim to attain a state of “pure consciousness” (PC). PC is supposed to be a state where one is conscious, but is not conscious of anything. That is, it is completely objectless, or if it has any object at all, the object is nothing but consciousness itself.
I see two problems with the idea of PC. The first is that I have doubts that such a thing is possible, and the second is that if it were possible, it would be useless.

(1) Degrees of consciousness. Affirmation of PC appears to treat consciousness as all or nothing. But we have very good reasons to reject this characterization. Consciousness appears to be something that can fade in and out. It is possible to occupy the boundary of consciousness, as one emerges from or drifts into sleep, or as anesthetic takes effect or wears off.
Suppose a meditator enters a state of PC and is then given an anesthetic. What would happen? Would one gradually become less and less purely conscious until one would reach a point where one would not be conscious at all? What would degrees of PC be like? What would be the fact that would distinguish a state of PC from a state without any consciousness at all?

(2) Some descriptions of PC locate it on a continuum with states of consciousness containing objects. The objects within consciousness fade away leaving only the PC. But why should there be such a fading away? Why isn’t there simply an instantaneous transition to and from PC? After all, if PC is possible, then there must come some point during the fading in and out process where objects don’t continue to fade in or out, but appear or disappear altogether. There must be some binary point of transition. Why and how would a gradual attenuation of object-consciousness culminate in an object-less consciousness rather than in an absence of consciousness?

(3) One of the main theories of consciousness in the philosophy of mind is the Higher-Order Thought (HOT) theory. According to the HOT theory, consciousness by its very nature involves a relation between a lower-order and a higher-order thought. But it seems that such a thing is not possible in pure-consciousness, unless it is somehow possible for the higher-order and lower-order thought to be identical (that is, PC would consist in a conscious thought C where the lower-order thought that C is about is C, itself). In fact, it seems to me this would have to be what PC would be if it were possible. The alternative would be that one would be conscious without even being conscious of being conscious, which seems to me to be incoherent.  Certainly one could not know that one was or had been conscious unless one could say what that was like, and this would be impossible if consciousness was completely objectless. A problem here is that if C is the sole object of C, then if one were to stop thinking about C, it seems one would thereby either necessarily either have to be conscious of some thought other than C, or lose consciousness altogether. Yet it seems that those who defend the possibility of PC never claim that the latter happens. Loss of focus in PC does not result in unconsciousness, but rather in falling back into object-consciousness.

It is premature to claim that the HOT theory is certainly correct, of course. But it does appear to have some favoring empirical evidence: https://www.ncbi.nlm.nih.gov/pubmed/21737339

(4) There seems to be no way to verify any claim to have experienced PC. Suppose I claim to have experienced PC. Couldn’t I be mistaken? We have all had the experience of driving somewhere and then being struck by having no memory of the trip. But this is clearly not a basis for claiming an absence of all conscious experiences en route. So if I can arrive at the end of a highway exit ramp without any memory of having been conscious at the beginning of the exit ramp, it seems I could also find myself at the end of a meditation session without any memory of having been conscious during the meditation session.

What good is PC?

Suppose that PC is possible. The bigger problem with PC, as I see it, it that even if it turns out to be possible, no useful conclusions about consciousness can be drawn apart from the fact that it is possible to be objectlessly-conscious, or conscious of consciousness alone as an object.

(5) No conclusions can be drawn about whether consciousness has a material or immaterial basis, whether or not it is possible or impossible to be conscious without a brain, whether God exists or doesn’t exist, or whether aardvarks are smarter than armadillos. Since there is no object in PC, nothing can be learned about anything by means of it.

(6) It is beyond controversy that much of human thought is unconscious. So even if someone is in a state of PC, it is entirely possible – in fact, certain – that there is still unconscious thinking going on. If there were no unconscious thought or perception occurring during PC, it would be impossible to rouse anyone from it by poking or talking to them. It may be that any thought that can be held consciously can also be held unconsciously. I initially thought that PC would have to be an exception, but on further reflection, it now seems to be that if it is possible to think consciously of nothing but consciousness, then it is also possible to think unconsciously of nothing but consciousness.

I conclude that pure consciousness is either impossible, or useless.

Nonreligious
Did Jesus Rise from the Dead? Part 6:...
The Secular Outpost 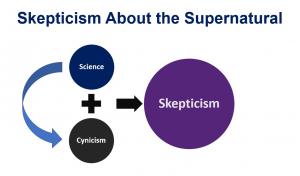 Nonreligious
Why I Reject the Resurrection - Part 4:...
The Secular Outpost
TRENDING AT PATHEOS Nonreligious