Appended to the Gospel statement are the names of some 115 evangelical leaders who have endorsed the document.  They include men and women; they include Presbyterians, Methodists, Lutherans, Baptists, Pentacostals, Charismatics, and people who belong to other churches.  Among the endorsers are African Americans, Asian Americans, Hispanics, and Whites.  They minister as presidents of colleges and seminaries, denominational leaders, pastors, evangelists, professors, television and radio executives, publishers, and leaders in parachurch organizations. …

Since its appearance in July 1999, another eighty-five evangelical leaders have endorsed the Gospel statement, among them Dr. Billy Graham. (This We Believe, p.18; Zondervan Publishing House, 2000)

So, we have good reason to believe that this Gospel statement represents an understanding of the Gospel and of the heart of the Christian faith that is widely shared by Evangelical Christian thinkers and leaders from a wide variety of Evangelical denominations.  If the content of this Gospel statement lines up well with the Four Basic Beliefs of Christianity, then we can reasonably conclude that Evangelical Christian churches and denominations accept and teach the Four Basic Beliefs of Christianity.

I have just been reading this Gospel statement, and it clearly and repeatedly references and teaches all four of the Four Basic Beliefs.  The first half of the statement consists of 26 paragraphs, which I have identified by the letters A through Z.  The second half of the statement consists of short sections of “Affirmations and Denials” that are numbered (in the document itself) as 1 through 18.

In the first half, there is a three-page section called “The Gospel” (This We Believe, p.241-243).  This short section could, all by itself, be used to show that Evangelical Christian denominations accept and teach the Four Basic Beliefs of Christianity.  Some of the paragraphs in that section touch on all four of the Four Basic Beliefs, in a single paragraph.  Here is a small sample from that section:

Through the Gospel we learn that we human beings, who were made for fellowship with God, are by nature–that is, “in Adam” (1 Cor. 15:22)–dead in sin, unresponsive to and separated from our Maker.  We are constantly twisting his truth, breaking his law, belittling his goals and standards, and offending his holiness by our unholiness, so that we truly are “without hope and without God in the world” (Rom. 1:18-32; 3:9-20; Eph. 2:1-3, 12).  Yet God in grace took the initiative to reconcile us to himself through the sinless life and vicarious death of his beloved Son (Eph. 2:4-10; Rom. 3:21-24).

The Father sent the Son to free us from the dominion of sin and Satan, and to make us God’s children and friends.  Jesus paid our penalty in our place on his cross, satisfying the retributive demands of divine justice by shedding his blood in sacrifice and so making possible justification for all who trust in him (Rom. 3:25-26).  The Bible describes this mighty substitutionary transaction as the achieving of ransom, reconciliation, redemption, propitiation, and conquest of evil powers (Matt. 20:28; 2 Cor. 5:18-21; Rom. 3:23-25; John 12:31; Col. 2:15).  It secures for us a restored relationship with God that brings pardon and peace, acceptance and access, and adoption into God’s family (Col. 1:20; 2:13-14; Rom. 5:1-2; Gal. 4:4-7; 1 Pet. 3:18).  The faith in God and in Christ to which the Gospel calls us is a trustful outgoing of our hearts to lay hold of these promised and proffered benefits.

This Gospel statement produced by a group of Evangelical Christian scholars and leaders repeatedly references and affirms each of the Four Basic Beliefs, as can be seen in the following table (click on the image below for a clearer view of the chart): 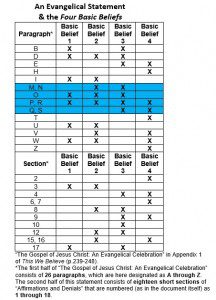 April 29, 2017
Sins of Omission: What the Bible does not Say
Next Post