Peter Kreeft and his co-author Ronald Tacelli open their Handbook of Christian Apologetics  (hereafter: HCA) with these words about their “reasons for writing this book”:

Kreeft and Tacelli believe that heaven and hell are in the balance for every human being, when it comes to acceptance or rejection of “the Christian faith”.  So, it is very important that they try “to persuade” other people to accept the Christian faith in order for those people to gain a better life now, and a wonderful eternal life in heaven after death, and to avoid a life of eternal misery in hell.

I have previously shown that the last ten arguments in his case all FAIL, so we have reason to suspect that his first five arguments will also fail.  But since these are arguments that he takes to be the best and strongest, we need to carefully examine and evaluate these first five arguments, in case one or more of them is in fact a good and solid argument for God.

THE CONCLUSION OF ARGUMENT #1

Here is the explicitly stated conclusion of Argument #1: “…this being outside the universe…is the unchanging Source of change.” (HCA, p.51).  I have re-stated this claim to clarify it a bit:

8a. There is exactly ONE being outside the material universe and that being is the unchanging Source of change.

One of the first things I look at when analyzing an argument is the conclusion of the argument.  Argument #1 is presumably one of the very best and strongest arguments for God, in the view of Peter Kreeft.  But there is an OBVIOUS and SERIOUS problem with Argument #1: The conclusion does not mention God!

In fact, the word “God” does not appear in anywhere in this argument.  How can Argument #1 be a strong and clear argument for the existence of God, if it never once mentions God?  In order for an argument to be a clear and strong argument for the existence of God, the conclusion of the argument should be that “God exists” or “There is a God”.   Argument #1 fails to satisfy this basic and obvious requirement.

We can fix this obviously defective argument by adding yet another  premise to fill in the logical gap:

(F) IF there is exactly ONE being outside the material universe and that being is the unchanging Source of  change, THEN God exists.

But this additional premise is highly questionable and, as is seen in Edward Feser’s version of the Argument from Change (in Chapter 1 of Five Proofs of the Existence of God), a fairly long and complex argument needs to be presented in order to support this questionable premise.

Furthermore, there is good reason to believe that (F) is FALSE.   God is a person, if God exists.  But a person cannot be an “unchanging” being, so the existence of an “unchanging” being does NOT imply the existence of God.  In fact, if the phrase “the unchanging Source of change” is supposed to be a reference to the CREATOR of the universe, then the antecedent of (F), i.e. “there is exactly ONE being outside the material universe and that being is the unchanging Source of  change”,  implies that the CREATOR of the universe is unchanging and thus not a person.  But if the CREATOR is not a person, then it follows that God does not exist.  So, to assert that “there is exactly ONE being that is the unchanging Source of change” appears to imply that God does not exist.

I realize that many theologians and philosophers of religion would argue either that (a) God is not a person, or that (b) it is possible for a person to be an unchanging being.  However, both of these positions seem very implausible, so I have serious doubts about premise (F).  In order to adequately argue for (F), one must not only provide strong arguments to support (F), but one must also explain either how God can be a non-person, or else explain how an unchanging being can be a person.

If I die and appear before God and am asked why I rejected Christianity,  I’m going to point to Chapter 3 of HCA, and say:

You sent this incompetent philosopher to persuade me that the Christian faith is true,  so what did you expect me to do?  Blindly accept arguments that are complete crap? Arguments that don’t even state the conclusion on the main question at issue?  Arguments that fail to state the single most important premise of the argument, and that fail to provide support for the single most important premise of the argument?  Screw that!  I’m not going to pretend to be a freaking IDIOT just so that you will let me into heaven.  No thank you.

Without any further analysis or critique, I can see that the Argument from Change, as presented by Kreeft is CRAP, because the success of the argument depends heavily on the DUBIOUS unstated premise (F), which in order for it to be rationally supported would require many further sub-arguments (at least a half-dozen further sub-arguments), and Kreeft has made no attempt to provide any of these additional sub-arguments to support premise (F).  Given that Kreeft makes no attempt to defend the dubious claim made by premise (F), and given that (F) is the most important, the most crucial, premise in the Argument from Change, this argument FAILS to provide any significant reason to believe that God exists.

These are just a couple of several problems with Argument #1, as we shall see.

Another serious problem with this argument is that (8a) is very unclear, even after my efforts to improve the clarity of this premise.  This premise contains at least two unclear phrases:  “outside the material universe” and “the…Source of change”.  The phrase “the…Source of change” pops up out of nowhere; this phrase does not occur anywhere else in the argument, and Kreeft provides no definition or clarification of what this phrase means.  The phrase “outside the material universe” arises from earlier premises, so I will deal with the unclarity of that phrase when I evaluate previous premises that also make use of that phrase.

Given the serious problems of unclarity with premise (8a) and given the absence of argumentation in support of the dubious unstated premise (F), we already have good reason to view Argument #1 as a complete failure.

Although premise (F) is the most important premise in the whole argument in relation to the ultimate conclusion that “God exists”, there is another very important part of the argument in relation to the explicitly stated conclusion (8a).  In viewing the argument diagram, which displays the reasoning supporting (8a), it is clear that the heart or core of that support is the two-premise argument supporting premise (6a).   The logical structure of the reasoning supporting (8a) is shown in this argument diagram (click on the image below for a clearer view of the diagram): 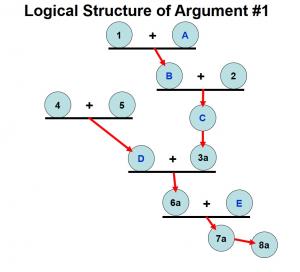 Here is what appears to be the core argument in the reasoning supporting (8a):

D. Anything that is outside the material universe is outside matter, space and time.

3a. There must be something outside the material universe.

6a. There is exactly ONE being outside the material universe and that being is outside matter, space and time.

This appears to be the core argument in support of (8a) because both premises of this argument are supported by arguments, and because (6a) is a key premise in the argument supporting (7a) and (8a).  So, this argument is firmly planted in the middle of the flow of logic moving from the initial premises to the stated conclusion (8a).

This core argument is clearly defective, because it is logically INVALID.  Premise (6a) does not follow from (D) and (3a).  We cannot infer that there is “exactly one” being outside the material universe from (D) and (3a).  At best, we can only infer that “at least one” such being exists, leaving open the possibility that hundreds or millions or trillions of such beings exist.

Both premises of this core argument are questionable, but Kreeft provides arguments in support of both premises, so we need to consider those sub-arguments before passing judgment on these two premises.  However, both (D) and (3a) make use of the phrase “outside the material universe” and the meaning of this phrase is UNCLEAR. Furthermore, Kreeft does not provide a definition or clarification of the meaning of this phrase, making it difficult to evaluate the truth of these premises.

The logic of Kreeft’s argument suggests that he is assuming (D) as a premise, in order to infer (6a) from (3a).  Premise (D) appears to be a conceptual claim, a partial analysis of the meaning of the phrase “outside the material universe”.

Based on this plausible interpretation, we can infer a definition of the key phrase in the core argument:

Something X is outside the material universe IF AND ONLY IF:

Notice that, in theory, there are eight different combinations of these three conditions, and thus eight different types of beings (click on image below for a clearer view of the chart):

Ordinary things, such as people, animals, plants, and physical objects, are Type 1 beings.  God, on Kreeft’s view, is a Type 8 being.  But there are potentially six other types of beings besides Type 1 and Type 8 beings.  On Swinburne’s view of God, God is a Type 7 being, because although God is not made of matter or energy, and God does not have any spatial characteristics, God does exist inside time; God is affected by the passing of time, and some of God’s thoughts and actions occur prior in time to other of God’s thoughts and actions.

Another interesting case to consider is that of angels.  Angels appear to be outside matter (i.e. they are not made of matter or energy), but inside time, and perhaps inside space as well.  Angels began to exist at some point in time, according to Christian theology, and although many angels (perhaps all) will continue to exist forever, it is possible for God to annihilate  an angel, so it is possible for an angel to come to an end at a specific point in time; an angel can, at least in theory, have both a beginning at one point in time, and and end at a later point in time.  Angels also appear to have spatial locations.  They appear to particular people at particular times and particular places.  So, although angels are “outside matter”, they appear to be “inside time” and “inside space”; angels appear to be Type 2 beings.

In any case, the core argument is INVALID, so it is an UNSOUND argument.

January 22, 2018
How Atheists get it Wrong, According to Tim Crane
Next Post