In Part 22,  I argued that Kreeft’s cumulative case for the existence of God is a complete failure because he has ONLY ONE argument in his entire case to support three of the basic divine attributes (i.e. omnipotence, omniscience, and perfect moral goodness), and that ONE argument (Argument #13: The Ontological Argument) is a BAD argument, as Kreeft himself admits (HCA, p.49).

Although I have already shown that Kreeft’s cumulative case for God is a complete failure, I would still like to make a few comments and objections concerning the remaining five arguments:

In this post, I will focus on three of the five remaining arguments: Argument #8, Argument #9, and Argument #10.  Although I will put forward some objections to these arguments, I won’t put much time and effort into evaluation of these arguments, because they are insignificant arguments in terms of a cumulative case for God.

As the chart at the end of Part 22 shows, these three arguments do not support of ANY of the basic divine attributes, so even if these arguments were solid and strong arguments, they would still fail to play any significant role in a cumulative case for the existence of God (click on the image below for a clearer view of the chart): 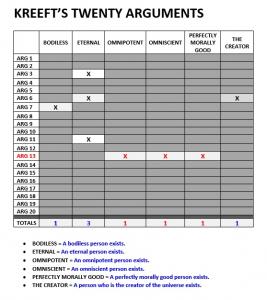 AN OBJECTION TO ARGUMENT # 8

One serious problem with Argument #8 is that it is UNCLEAR.  It is too unclear to be a good and solid argument.  Kreeft uses a variety of abstract terms and phrases, and he does not bother to define any of them (see HCA, page 63):

So, Argument #8 is a crappy bit of incompetent philosophy.  If someone called this argument “Word Salad” and dismissed it as unworthy of serious consideration, I would be inclined to agree with that evaluation.

Kreeft thinks that since Aquinas provided FIVE arguments for God in just TWO pages, that he (Kreeft) should be able to provide one argument for God in just two pages (starting near the bottom of page 62 and ending about halfway down page 64 of HCA).  But Aquinas could not do this, nor did Aquinas attempt to do such a foolish thing.   Kreeft is clearly not capable of performing such an incredible intellectual feat.  Kreeft rushed in where angels (and the Angelic Doctor) feared to tread.

However, I think I can come up with a plausible interpretation of some key claims in Argument #8, and based on that interpretation I can show that this argument does not work.

Why couldn’t reality consist of just one lonely proton?  If so, wouldn’t that proton be intelligible and self-sufficient?  Does it really need to have other protons and electrons and photons and neutrons and various forms of energy?

It is not logically necessary for there to BE more than one actual proton in existence, but to understand the idea of a “proton”, we need to understand how two protons would interact with each other IF there were two protons.

If the above reasoning reflects Kreeft’s thinking about the necessity of understanding physical objects in terms of “interactions” and “relationships”, then the problem with Argument #8 is that this same reasoning applies to God, thus reducing God to being just as “dependent” and just as lacking in “self-sufficiency” as physical objects.  Thus, this argument necessarily FAILS to establish the existence of a transcendent being who is self sufficient and self explanatory.

As with the proton, we can conceive of reality consisting of just God alone.  But what does it mean for a being to be “God”?  Among other things, this means there is a person who is omnipotent and omniscient.  But what does it mean for a person to be “omnipotent” or “omniscient”? “omnipotence” means that this person is able to control any and every object and event, and make it do whatever the person wants it to do.  “omniscience” means that this person knows every detail about every object that exists and event that occurs.

But if there are no other objects and no other events (besides the musings of God), then there would be nothing for God to control and nothing for God to know about (other than himself).  That is a possibility, but like the lone proton, the concepts of “omnipotence” and “omniscience” have IMPLICATIONS of a hypothetical nature:  IF there was a universe full of stars and planets, and IF there was a planet full of plants and animals, an omnipotent person could control every object and every event in that universe, and an omniscient person would know every detail about every single star and planet and every detail about every plant and every animal, including the number of hairs on my head.

AN OBJECTION TO ARGUMENT #9

Argument #9 is the Argument from Miracles.  The second premise of this argument is FALSE:

I have two different reasons for asserting that premise (2) is FALSE, and they are both based on the definition that Kreeft provides of a “miracle” in premise (1):

1. A miracle is an event whose only adequate explanation is the extraordinary and direct intervention of God. (HCA, p.64)

Kreeft could, however, modify his concept of God to get rid of the logical contradiction it contains.  In that case, there is still a serious problem with premise (2).  For something to be a “well-attested miracle”, it must be a supernatural event that has religious significance.  For example, Jesus rising from the dead appears to be a supernatural event (people who have been dead for over 24 hours cannot come back to life by natural causes) and to have religious significance (Jesus claimed to have been sent by God, and his rising from the dead would confirm this religiously significant claim).

AN OBJECTION TO ARGUMENT #10

Argument #10 is based on a premise that appears to be FALSE:

This seems to be a FALSE DILEMMA that is very similar to a premise found in crackpot creationist arguments:

One difference between plants and animals is that animals are mobile; they can move from one place to another place.  But mobility by itself is not much help for survival, because an animal can move from a safe place to a dangerous place or from a place with plenty of food  to a place where there is no food.  So in order for mobility to help an animal survive, an animal needs to be able to obtain information about its physical environment in order to determine whether it would be beneficial to move from where it is at to some other location.  Thus, animals developed sensory capabilities to obtain information about their physical environment.

If we understand the “blind chance” explanation to mean that random blobs of cells or biological chemicals just happened to gather together in the same location to form a human being, then OF COURSE “blind chance” is not a serious candidate for explaining the origin of human beings.  The process of EVOLUTION is neither “intelligent design” nor is it “blind chance”; it is a third alternative.

Creationists love the FALSE DILEMMA between “intelligent design” and “blind chance”, but this ignores the obvious third alternative, which is that human beings EVOLVED from less intelligent forms of life.  Premise (2) of Argument #10 makes the same idiotic blunder as creationist arguments; it ignores the third alternative of EVOLUTION.  Premise (2) is FALSE, so Argument #10 is UNSOUND.

May 11, 2018 Kreeft's Case for God - Part 24: The Argument from Contingency
Recent Comments
0 | Leave a Comment
Browse Our Archives
get the latest from
The Secular Outpost
Sign up for our newsletter
POPULAR AT PATHEOS Nonreligious
1