GEORGE’S ARGUMENT FOR HIS MIRACLE CLAIM

A. Only God can cause a person to rise from the dead. (metaphysical claim)

Here is what I consider to be a fully clarified version of George’s argument, a version of his argument that is clear enough to be rationally evaluated:

1c. Dr. Sean George was clinically dead for 1 hour and 25 minutes and then he came back to life without any neurological problems. (factual claim)

A3. Only God can cause a person who was clinically dead for 1 hour and 25 minutes to come back to life without any neurological problems. (metaphysical claim)

2c. Dr. Sean George was clinically dead for 1 hour and 25 minutes and then God caused him to come back to life without any neurological problems. (miracle claim)

The meaning of the premises and the conclusion seems to be clear, and the logic of the argument is correct, so the only question that remains is whether the premises of this argument are true.

It is clear that Dr. Sean George is alive today.  It is also clear that he is not currently experiencing any major or obvious neurological impairment, so his claim that he recovered from cardiac arrest “without any neurological problems” seems very plausible. 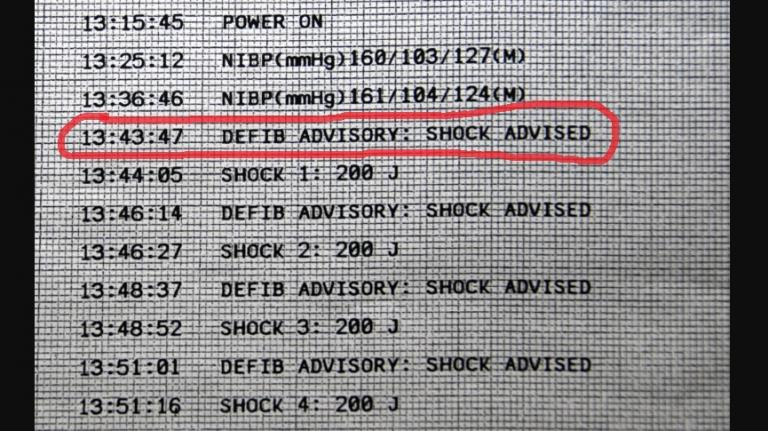 There is only a time stamp, and not a date, indicated on the print-out from the defibrillator.  But I am willing to take Dr. Sean George’s word that this defibrillator print-out is from the medical emergency that he experienced on October 24, 2008.

A heart attack is a common cause of cardiac arrest, and the defibrillator would be used shortly after it was determined that Dr. Sean George’s heart had stopped beating (no pulse detected), so the claim that he went into a state of clinical death (i.e. cardiac arrest) at 13:42 (i.e. 1:42 pm) is supported by the above evidence.

His heart was still beating as of 13:34, the time of the initial ECG print-out, and his heart was no longer beating as of 13:43, the time of the advised shocking on the defibrillator print-out.  So, his cardiac arrest began sometime between 13:34 and 13:43.  It makes sense that the defibrillator would be used ASAP once it was determined that he did not have a pulse, so it is very likely that his cardiac arrest began at 13:42 (i.e. 1:42 pm).

Assuming that premise (1c) is NOT an extraordinary claim, then this evidence is sufficient to show that his clinical death (i.e. cardiac arrest) began at 13:42 (1:42 pm).

It is less clear when Dr. Sean George’s heart began to beat again.  It appears that Dr. Sean George’s arithmetic is faulty.  The period of time when he was clinically dead (in a state of cardiac arrest) consists of three phases:

The combination of phase 1 and phase 2 has a total duration of 70 minutes (48 minutes + 22 minutes = 70 minutes).  Dr. Sean George confirms that the period of attempted resuscitation lasted for 70 minutes:

Over the following 70 minutes the team in Kambalda worked with paramedics and emergency physicians from Kalgoorlie who fought bravely to save my life. … In 1 hour and 10 minutes having had 13 electrical shocks from a defibrillator, and over 4 000 cardiac compressions, they all agreed to stop CPR and all life support measures except oxygen to the lungs. (“The day God raised me from the Dead“)

The third phase began at 14:52 (2:52 pm), but the duration of the third phase, when no CPR was being provided prior to ROSC (Return of Spontaneous Circulation, i.e. return of his heartbeat), is uncertain:

They had stopped the CPR for about five to eleven minutes.  We are not really sure how long it was, whether it was five or eleven, or in between that. (Unbelievable podcast at 30:22-30:31 on the recording)

So, phase 3 had a duration of between five and eleven minutes.  If CPR was terminated at 14:52 (i.e. 2:52 pm) and there was a period of between five and eleven minutes that elapsed where no CPR was provided, and then Dr. Sean George’s heartbeat returned, then his heartbeat returned sometime between 14:57 (2:57 pm) and 15:03 (3:03 pm), and the total duration of clinical death (cardiac arrest) was at least 75 minutes and possibly as much as 81 minutes.

Because he does not know whether phase 3 lasted for five minutes or eleven minutes or something in between, the most that Dr. Sean George can claim with confidence is that he was in a state of clinical death (cardiac arrest) for at least 75 minutes, which is one hour and 15 minutes, NOT one hour and 25 minutes.

However, premise (1c) is only off by a few minutes, so if we tweak George’s argument just a bit, the first premise would be true:

1d. Dr. Sean George was clinically dead for at least 1 hour and 15 minutes and then he came back to life without any neurological problems. (factual claim)

A4. Only God can cause a person who was clinically dead for at least 1 hour and 15 minutes to come back to life without any neurological problems. (metaphysical claim)

2d. Dr. Sean George was clinically dead for at least 1 hour and 15 minutes and then God caused him to come back to life without any neurological problems. (miracle claim)

May 30, 2019 Defending the Conspiracy Theory - Part 14: Exposure by Adversaries
Recent Comments
0 | Leave a Comment
Browse Our Archives
get the latest from
The Secular Outpost
Sign up for our newsletter
POPULAR AT PATHEOS Nonreligious
1