Sometimes, Christian philosophers put forward pieces of crap that they pretend to be philosophical arguments, but that are just word salads that are posing as philosophical arguments.  The core “argument” in Tim Hsiao’s article “A Defense of the Perverted Faculty Argument against Homosexual Sex” (hereafter: PFA) appears to me to be one such faux argument.  Hsiao fails to define or to clarify ANY of the basic terms and phrases in his core “argument”, making it a string of words that cannot be rationally evaluated.

Here is the core “argument” in PFA:

4. All sexual activity that is not open to the creation of new life is immoral.

7A. All homosexual activity is immoral.

This is NOT an actual argument, because every key term in the argument is UNCLEAR, making it impossible to rationally evaluate any of the three statements that make up this core “argument”.

Here is Hsiao’s response to my criticism of his core “argument”:

It seems self-evident to me that all of the key terms in his core “argument” are UNCLEAR, VAGUE, and/or AMBIGUOUS.  If Hsiao cannot discern that there is a problem of CLARITY in these key terms even after I point to those key terms and object to their UNCLARITY, then he is not intellectually capable of producing an intelligent, logical, and clear philosophical argument.

A DEFENDER OF HSIAO’S “ARGUMENT”

ARE THE KEY TERMS IN THE CORE “ARGUMENT” OF PFA UNCLEAR?

FUCK UP BY WORLD HEALTH ORGANIZATION EXPERTS ON SEX

One important thing that this report did was to provide a DEFINITION of the term “sexual health” that has significantly influenced thinking and investigations about this subject for the past four decades: 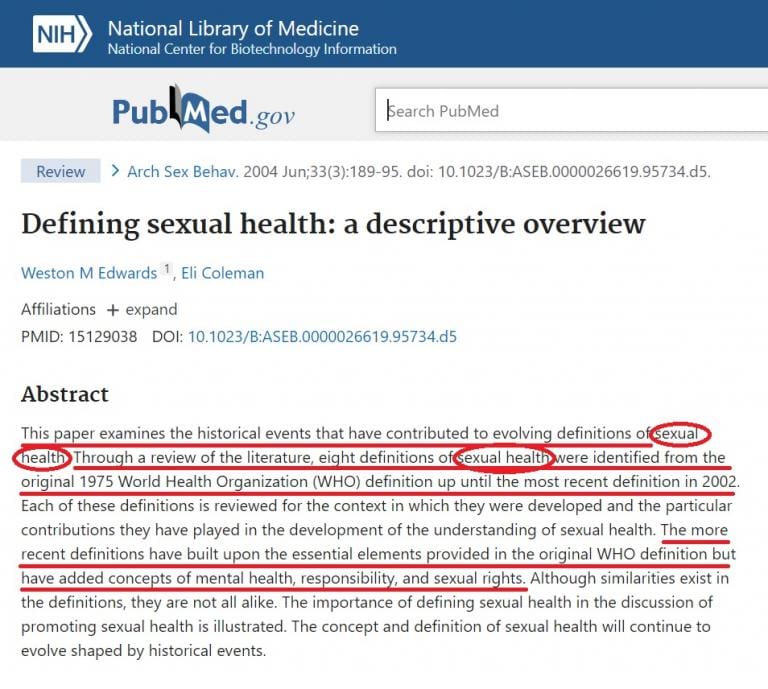 Although this 1975 WHO report had significant impact on the development of thinking and investigations about sexual health, there was a significant problem with this report, as is pointed out in a 2002 WHO publication (Defining sexual health: Report of a technical consultation on sexual health, 28–31 January 2002, Geneva, p.4): 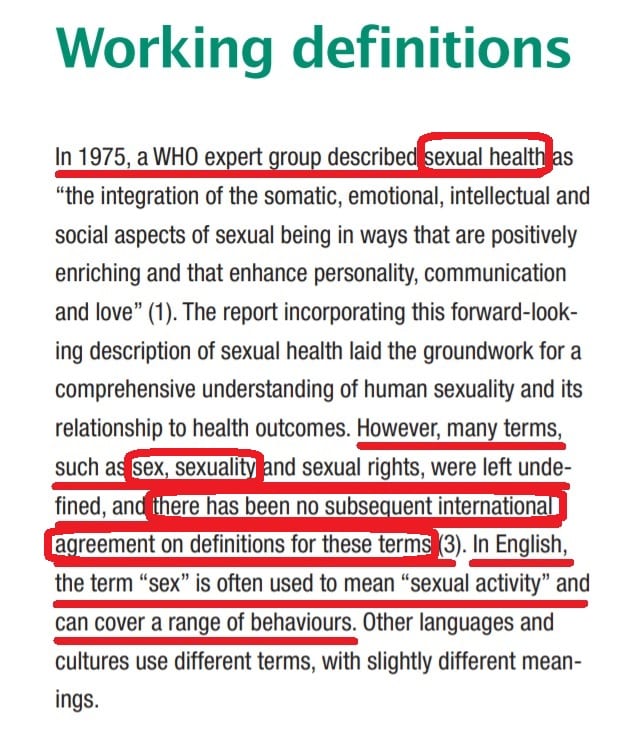 The doctors and sex experts who wrote the 1975 Report fucked up.  They FAILED to clearly define the most basic terms they were using, such as “sex” and “sexuality” and “sexual activity”.

Hsiao and 90Lew90 would not see any problem with the 1975 WHO report, since their view is that the meanings of terms like “sex” and “sexuality” and “sexual activity” are CLEAR and OBVIOUS. But as the authors of the 2002 WHO report note:

…there has been no subsequent international agreement on definitions for these terms.

In other words, these terms are UNCLEAR, and the meanings of these terms are NOT obvious, so these basic terms are in NEED of a clear definition, which the 1975 WHO report FAILED to provide.

Here is another bit of evidence that supports my view that the phrase “sexual activity” is UNCLEAR, and that the meaning of the phrase is NOT obvious.  A common medical question that doctors ask their patients involves a phrase that is very close to the phrase at issue here:

Are you sexually active?

Many people find this question to be problematic.  This in itself is evidence for my view that the phrase “sexual activity” is UNCLEAR and that the meaning of this phrase is NOT obvious.

But because many people find this question to be problematic, they ask experts about the MEANING of this question.  They ask health experts at Planned Parenthood, for example, and they ask other medical experts.  The response of experts generally begins with the admission that this question is somewhat UNCLEAR.  Furthermore, when these experts provide “clarification” of this question, they end up contradicting each other, by giving different and conflicting interpretations of the question.  This provides even more evidence supporting my view that the phrase “sexual activity” is UNCLEAR and in need of definition.

Here is a response to a request to a medical expert to clarify this common question: 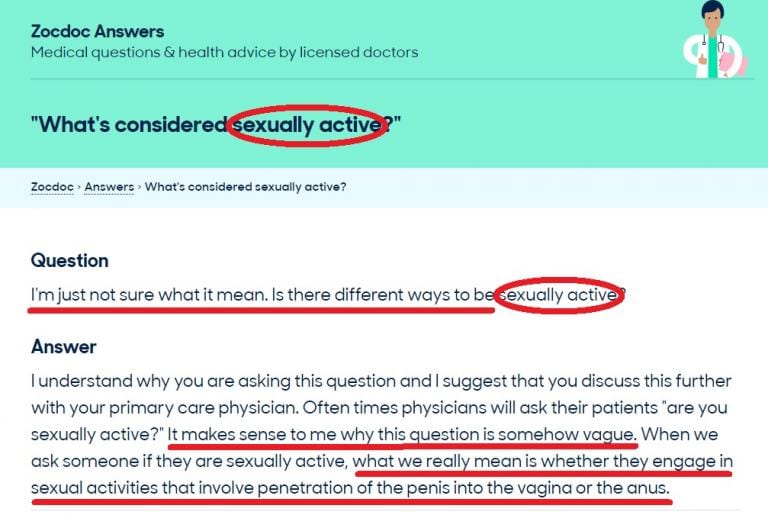 Note that this medical expert admits that

…this question is somehow vague.

According to this expert, if you engage in sexual activities that involve penetration of the penis into the vagina or penetration of the penis into the anus, then you are “sexually active” but if you do NOT engage in one or the other of these two types of sexual activities, then you are, according to this medical expert, NOT “sexually active”.  This seems fairly clear, but other experts understand this phrase as having a different meaning.

Here is the answer that health experts from Planned Parenthood give to people who ask for clarification of the common question “Are you sexually active?”: 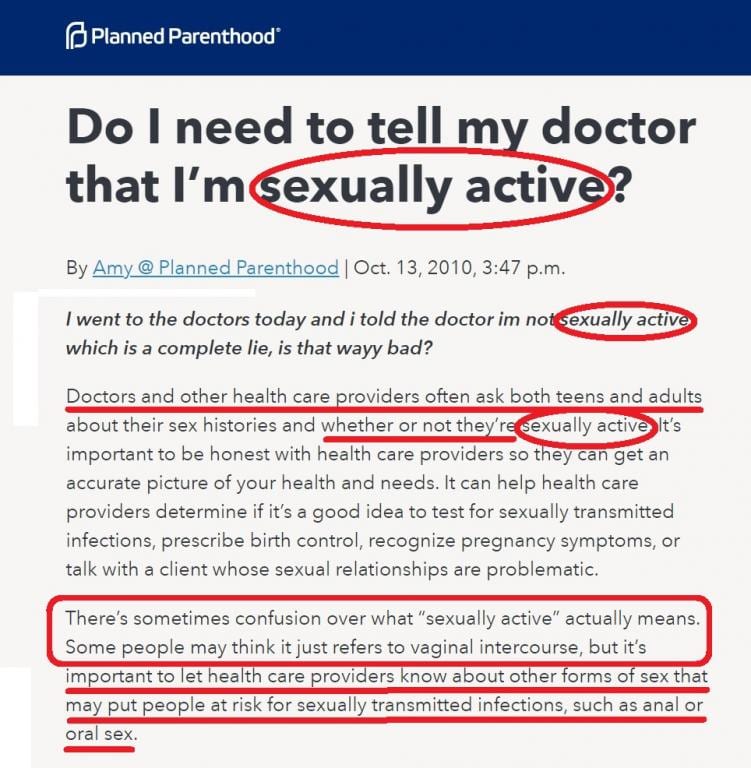 According to health experts at Planned Parenthood:

So far, we have seen that there are at least three different interpretations of the phrase “sexually active”:

But other medical experts provide yet another possible interpretation of the phrase “sexually active”.  Here is the clarification offered by health experts at Mount Sinai Adolescent Health Center: 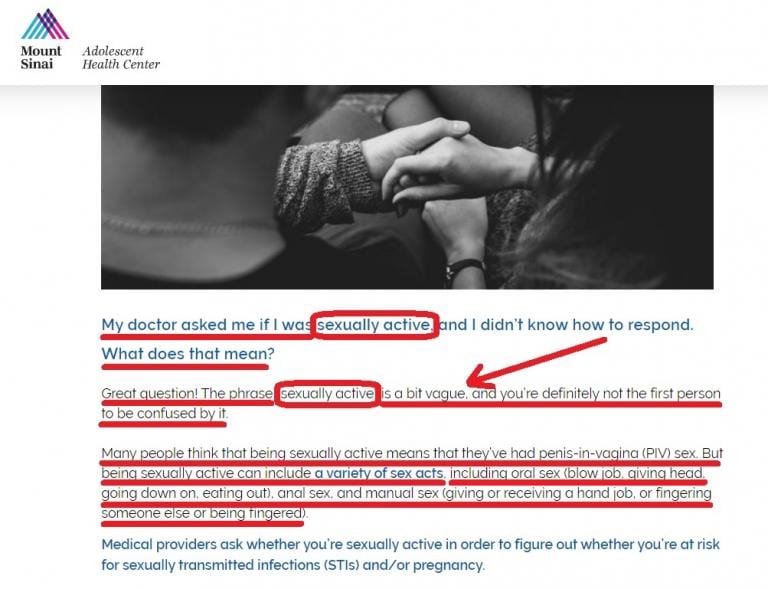 Note that, once again, the health experts admit that:

The phrase sexually active is a bit vague…

They provide a fourth possible meaning for this phrase:

NONE of the previous clarifications/definitions mentioned “manual sex”.

Do you engage in sexual activity?

In view of the fact that a careful definition of “homosexual activity” put forward by a well-known Catholic bishop and well-respected moral theologian has several significant problems, and thus fails to be a clear and accurate definition of that phrase, this is evidence that the phrase “homosexual activity” is an UNCLEAR phrase, and that the meaning of this phrase is NOT obvious.

In the next post, I will present evidence concerning the UNCLARITY of the phrase “sexual activity” in the LEGAL arena, where the focus is on sex crimes.